In the first part of their much-anticipated Netflix...
Women

While a six-year-old girl said she wanted: "Something...

A woman has claimed she was kicked out of her gym over her ‘inappropriate’ workout attire.

TikTok user Leanie Marie, from the US, posted a video earlier this week showing the outfit in question.

The avid gym-goer – who boasts 22,000 followers on the video-sharing platform – filmed a clip of herself in her car after she was allegedly forced to leave by staff, The Sun reports.

She captioned the clip: ‘Showing off the “inappropriate outfit” that got me kicked out of the gym.’

The video opens with Leanie sitting in the driver’s seat in a black hoodie. 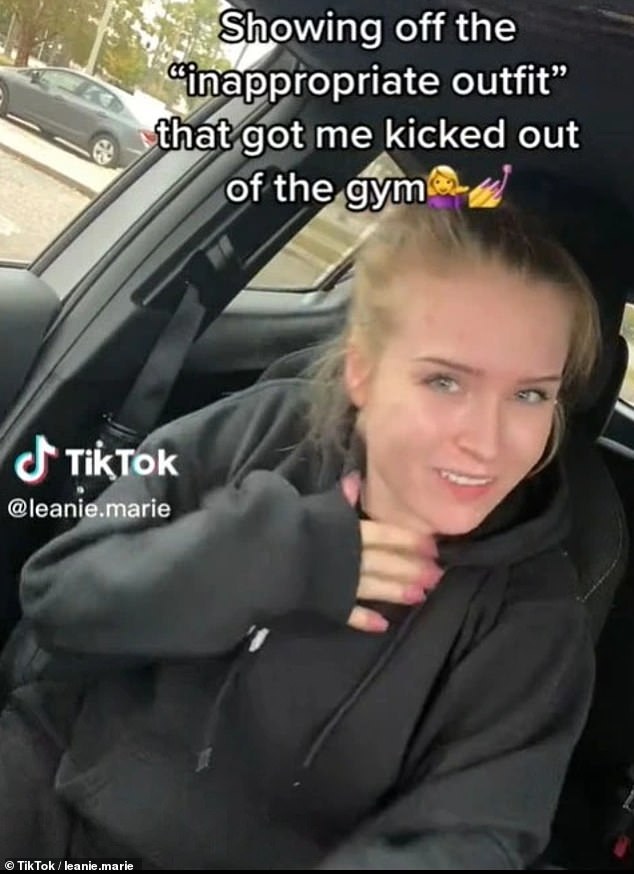 Leanie claims she was kicked out of the gym for her ‘inappropriate’ attire. The TikTok star filmed herself sitting in the driver’s seat of her car after the incident 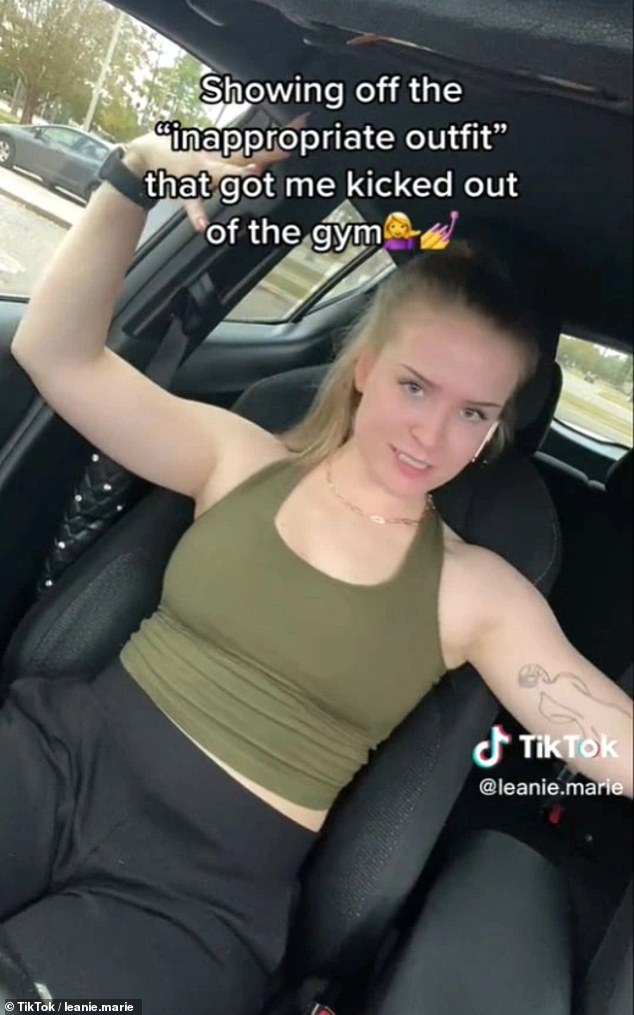 Followers rushed to defend her outfit in the comments. The TikToker says her workout attire prompted staff to kick her out of the gym

As she removes the sweatshirt, Leanie mimes along to an audio that says: ‘What do I do for a living? I’m a professional attention-seeker.’

Underneath the baggy sweatshirt, the social media star was wearing a green tank top designed for exercise.

She then paired her top with some loose-fitting black tracksuit bottoms with pockets.

The video has since racked up thousands of views and baffled followers jumped to defend Leanie. 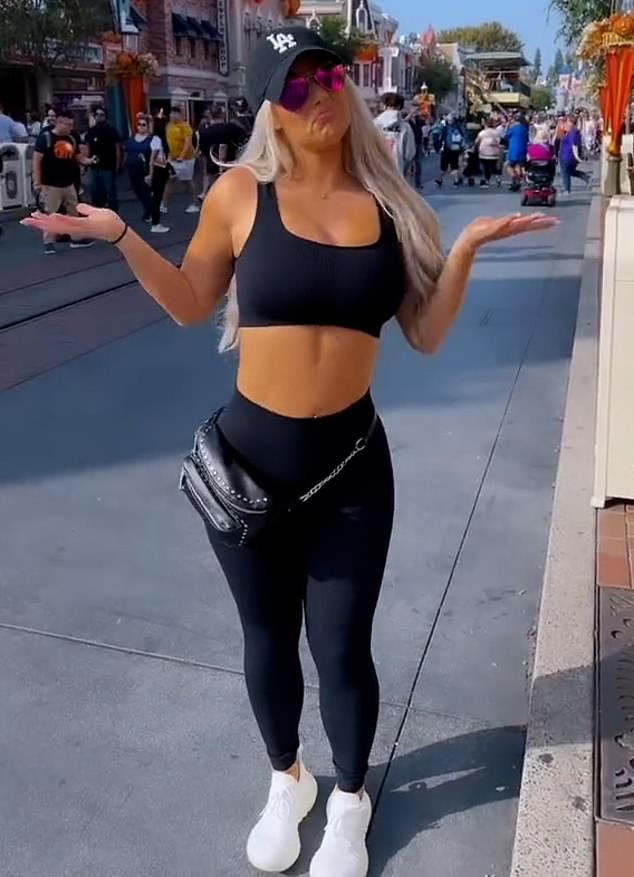 Laci Kay Somers (pictured) from San Francisco, United States, uploaded a video to TikTok where she showed off her outfit at the Florida theme park

One replied: ‘YO, THEY KICKED YOU OUT?!’

Sarcastically branding her a ‘sinner’, another added: ‘Showing off them shoulders –  how dare anyone know you’re a female?!’

‘I don’t know, those shoulders,’ a third joked. ‘Just like high school.’

Earlier this week, influencer Laci Kay Somers, 30, from San Francisco, claimed she was ‘body shamed’ by Disneyland staff for wearing a crop top.

Laci uploaded a video to TikTok where she showed off her outfit at the Florida theme park.

For the cameras, the public figure pirouetted in her black baseball cap, sports bra, crossbody bag, leggings and trainers. 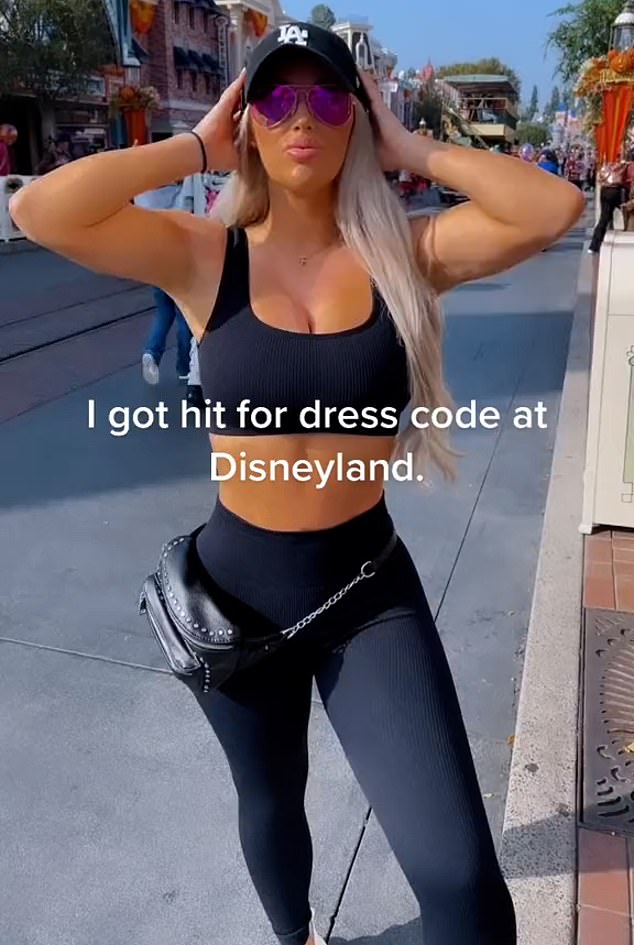 The ‘public figure’ pirouetted for the cameras as she showed off her baseball black cap, sports bra, crossbody bag, leggings and trainers.

The footage, which was emblazoned with the words ‘I got hit for dress code at Disneyland’, has been viewed 55,000 times and has almost 5,000 comments.

In response to being told off, she confusingly asked ‘What I do tho?’ and added ‘I got hit for dress code at Disneyland #bodyshaming’.

Disneyland’s dress code bans clothing which ‘exposes excessive portions of the skin that may be viewed as inappropriate for a family environment’.

One user put ‘All you did was look perfect’ while another wrote ‘I feel like I’ve seen girls wearing less there, that’s odd. they’re just hatin!’.

‘You got hit for jealousy!’ and another put ‘Just cause you look hot in it, smh ain’t the way it goes though, haters’.

Another TikToker added: ‘How dare you be an attractive person showing off her body. The nerve.’

However one user agreed with Disney’s decision and said: ‘Buy a shirt, there is a dress code.. follow it or leave’ while another wrote ‘be respectful of other people’.

‘They really said she can’t come in here lookin like a snack when we’re trying to make 8 figures off these caramel apples,’ joked a third.