What's the secret to gifting? Simon Mills knows (but he's keeping the receipt, just in case)

The Government has today published plans to continue...
Women

We live in an age of rampant consumerism where trends are fleeting, plastics are killing the earth and a Christmas gift, no matter how extravagant, is lucky to keep its appeal until Boxing Day. Ergo, modern gift shopping is a minefield only navigable with targeted research on provenance, collateral environmental damage and long-term desirability.

All fine if you are the kind of person who takes notes on loved ones’ preferences during the year, shops tactically and, crucially, in good time. But not if, like me, you only know that the season is upon you when Amazon sends an email with its last delivery date. Or, even more reliably, when my youngest daughter texts me her (lengthy) Christmas list.

A nascent goth, at eight she had eschewed Barbies in favour of stuff (and I quote from her actual lists) like… 1. A red velvet chaise longue (vintage). 2. Tickets to the opera (with opera glasses). 3. A tame Russian red fox. 4. A coffin. 5. A cloak. 6. Black contact lenses. 7. A smoke machine. 8. Some taxidermy. 9. A feather boa (real feathers). The tame fox, in case you are wondering, is indeed something you can buy… for around ten thousand quid. 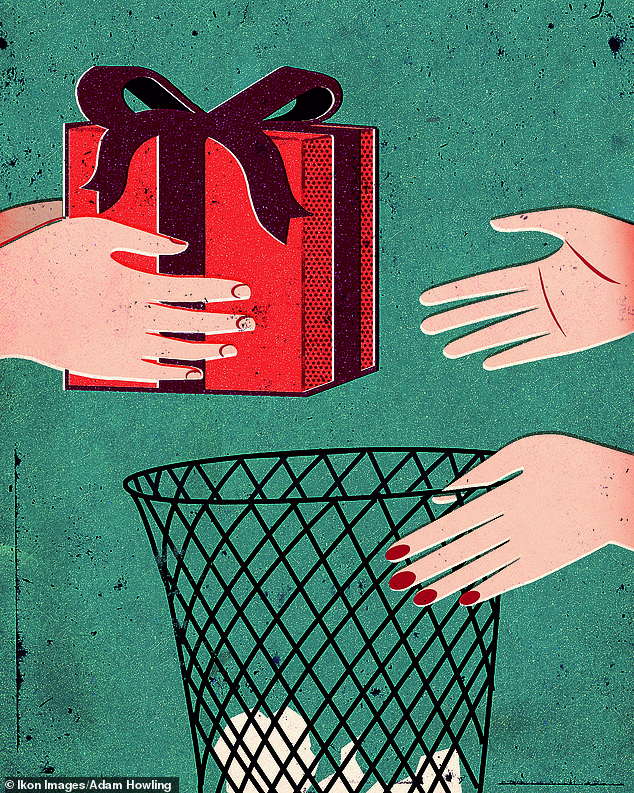 We live in an age of rampant consumerism where trends are fleeting, plastics are killing the earth and a Christmas gift, no matter how extravagant, is lucky to keep its appeal until Boxing Day

But despite – or maybe because of – my chaotic present-buying MO, I am a big fan of the detailed Christmas list. Don’t just give me the product – give me the colour, serial number and URL link. Of course, this level of specificity wasn’t considered strange with a young family – they’d supply you (or Santa) with a selection of items to buy.

There might’ve been brief tears if one or two had sold out, but this was a quantity game – the bigger the stack, the happier the kid. Wife? A big box from Net-a-Porter or a small box from Cartier. You were God’s gift to gift giving. And flat broke until March.

In the absence of these lists, gift buying is much trickier. The aforementioned notes are vital and must include (while not being limited to) shoe or dress size, preference for gold or silver, tan or black leather, hoop, stud or drop earrings. As most men are clueless about jewellery (I am), advice should be taken from her friends, her jewellery box examined for hints and the names on the little felt bags noted.

If you are going to buy sexy underwear for an intimate attachment then I would advise extreme caution – unless you have been supplied with chapter, verse and exact cup size. I once foolishly relied on the advice of a store sales assistant who assured me that a certain Christian Dior pink bra and knickers set would be a perfect fit for my slender beloved. It wasn’t. Not even close. The cups were built for Dita Von Teese and the pants made for one of the older Kardashians. ‘And I suppose that’s how you would like me to be!’ she said after unwrapping and discarding in tears. No comfort or joy for me that Christmas night. Which reminds me… keep all receipts.

Similarly, be very careful with domestic equipment. Cooking stuff is nice so long as it is something that either Nigella would deploy during a vigorous spatchcocking or that Nigel Slater might use to whip up a midnight shakshuka. So, a chunky chopping board from Daylesford or Toast: yes. A six-slice toaster from Argos with the words ‘James Martin’ on the side: not so much.

Ditto machines, accessories and attire that pertain to health, fitness and diets. In this category I include blenders, spiralisers, those long rubber bands and running kit. Your gift may well be interpreted as an allusion to a spousal dissatisfaction with body size. The end result will be similar to that engendered by the poorly thought-out lingerie purchase.

I would also tread carefully with in-laws – a family sub-set for which you might be tempted to buy a generic gift. They will insist that they don’t want anything but pass judgment on your lack of generosity if you fail to deliver. Sandalwood soap or lavender bubble bath? This is unimaginative on a Terry and June-ish level. Gadgets or anything that has to be hooked up to the web via Bluetooth, meanwhile, will remain boxed and unused. Spines of novels will stay unbroken and their prose, if accidentally glimpsed, will be derided for some graphic first-chapter sex scene that you failed to proofread before wrapping. A newly published political autobiography of a Tory minister I once purchased for an ex mother-in-law showed up in the window of the charity shop within days of New Year. I went into the store, pulled said tome from the display and found the ink still damp on the loving dedication I had written to her on the inside cover.

Then, of course, there are the people who will keep the present for years, while fibbing about its usefulness, just to spare your feelings. Finding stuff I had given to my much-missed father over many Christmases, long after he’d died, was testament to that. All were still pristine in their packaging, my dad having blatantly lied about how much he was enjoying the aftershave/gadget/book I’d given him.

Then there’s the cost of everything. I’m sorry, but in 2022, with mortgages and fuel bills soaring, inflation skyrocketing, salaries stagnating, this is becoming a bit of an issue. Instead of going to the mall or the high street, how about looking to The Repair Shop on the BBC, taking inspiration from the activities of the fellas with the pliers and wire brushes? Why buy new when you can bring life back to a moth-eaten coat, a long-stopped family heirloom watch or an old armchair?

So what does the-most-difficult-man-in-the-world-to-buy-for (me) want this year? Nothing, really. Maybe a few little things, but honestly, not that much at all. In fact, I now give my kids and my girlfriend an un-gifting list of stuff I definitely do not need any more of. I have enough coffee-table tomes, electronics and quirky loo books, aftershaves and neckties, sweaters, jackets and shoes to see me to my grave. Apart from, say, a 1967 Lamborghini Miura, it is experiences, not extravagances that I desire. Forward gifting – an envelope containing details and dates of international flights, hotel bookings, cottage rentals, festival preorders – provides an instant thrill, added to the exciting countdown.

What else? Socks – thin, ribbed, preferably Italian, in fawn, mint, grey, navy or light blue. Gardening tools, underpants (M&S, Uniqlo, Sunspel, please), an earth rotavator, some nice white teeth, my mortgage paid off, the gas bill waived. Can you do that, Santa?

Previous article
Laura Haddock opens up to Julia Llewellyn Smith about her struggle to have children
Next article
Rosie Green: How to do Christmas, divorcée style