What Kate and Prince William REALLY eat at home: As Prince of Wales reveals he cooks a 'mean steak'

Prince William has reportedly given up on trying...
Women

A Manchester dad says he has received a...
Women

The Prince of Wales boasted that his wife Kate is a ‘very good’ cook and he can make a ‘mean steak’ as he took part in a cooking class for young carers on Tuesday.

The father-of-three appeared in good spirits as he greeted staff and volunteers at the centre before then getting stuck into making some chicken teriyaki and noodles for lunch.

During the visit Prince William, 40, told chef Kevin Muhammad: ‘I do a bit of cooking, not much though. Catherine’s very good though.

‘I do a mean steak. My sauces come out quite dry or lumpy – I’ve got to work on those!’

However, this isn’t the first time that the William and Kate revealed what delicious dishes they love to cook up at home. 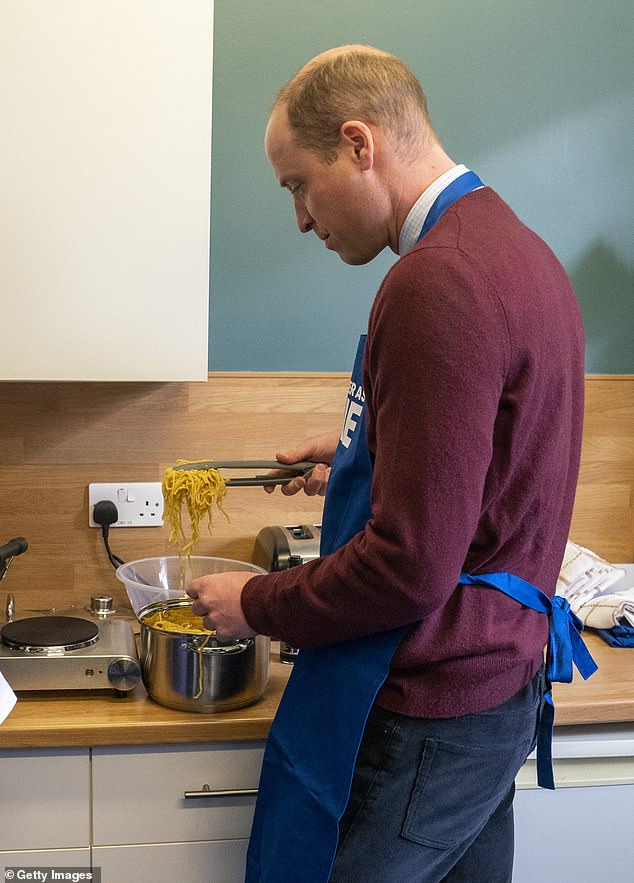 According to Kate, William used to cook up ‘all sorts of meals’ in the kitchen in an attempt to win over her affections including spaghetti bolognese (pictured in a cooking lesson during his visit to Together As One)

In 2019, Kate revealed that Prince William tried to woo her with his cooking skills while they were at university together.

The Prince and Princess met while both studying at the University of St Andrews in Scotland.

And according to Kate, William used to cook up ‘all sorts of meals’ in the kitchen in an attempt to win over her affections including spaghetti bolognese.

Speaking to Mary Berry on A Berry Royal Christmas the mother-of-three confessed that Bolognese sauce was one of his speciality dishes.

‘In university days he used to cook all sorts of meals,’ she told the baking legend. 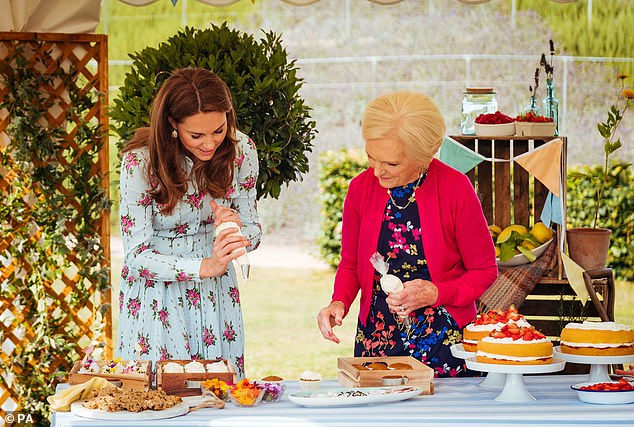 ‘I think that’s when he was trying to impress me, Mary! Things like Bolognese sauce, and things like that.’

The duchess also revealed in the one-off show that she may be a little clumsy while she and Mary prepared non-alcoholic Christmas cocktails.

While preparing to shake up a cranberry and lime concoction, Kate joked: ‘This is where you’ve got to make sure you’ve put the lid on it before you shake it. 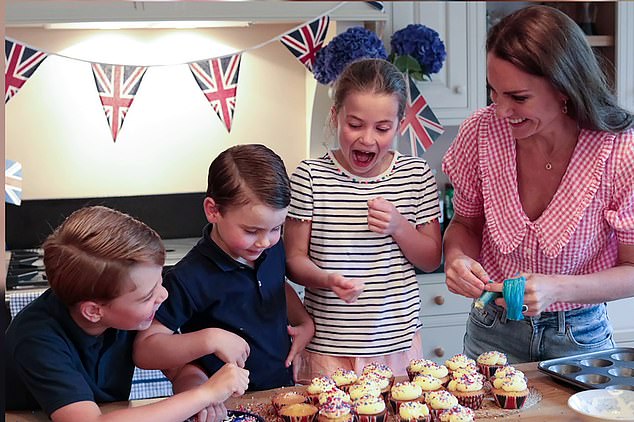 The snap caption read: ‘Baking cakes for the local community in Cardiff to enjoy at a Platinum Jubilee street party taking place today! We hope you like them!’

In the photos, the three children could be seen mixing the ingredients together before icing the cupcakes with the Duchess.

Union Jack bunting could be seen hanging around the kitchen, while Charlotte was busy cracking eggs and Louis used a sieve to add in the flour to the cake mix.

George, meanwhile, could be seen helping his sister add in the ingredients. 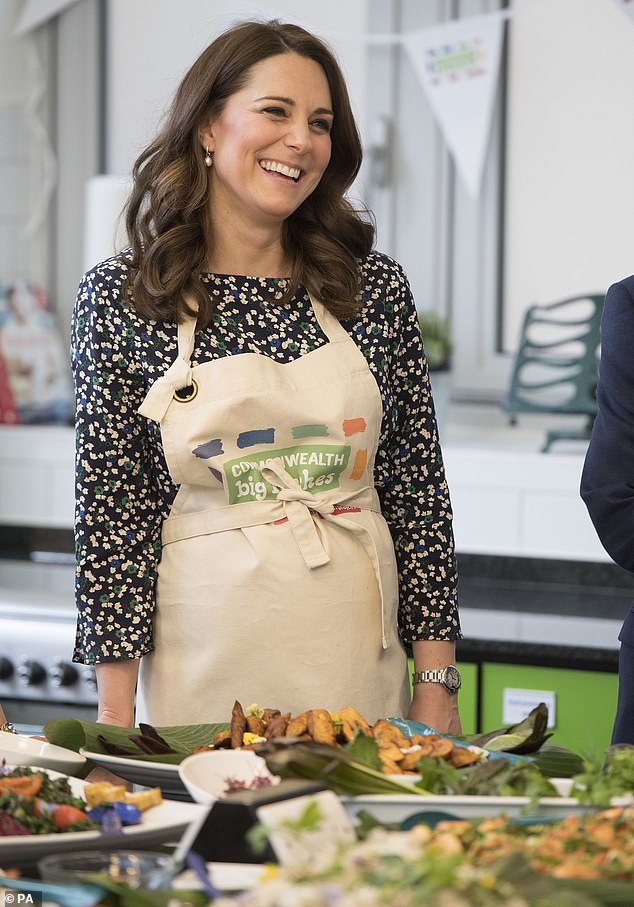 In 2020, a former royal chef revealed his recipe for Kate’s favourite dessert, a sticky toffee pudding (pictured taking at a Big Lunch at St Luke’s Community Centre in 2018)

In 2020, a former royal chef revealed his recipe for Kate’s favourite dessert, a sticky toffee pudding.

Darren McGrady, 60, who worked as a personal chef to the Queen, as well as Princess Diana and Prince William and Harry, revealed Kate Middleton often cooks her own meals and even does her own grocery shopping.

Speaking to Delish, the cook, who now lives in Dallas, Texas, said he starts the recipe by coating chopped dates with baking soda.

He then melts Muscovado sugar to make the sticky-sweet glaze.

Darren, who has cooked for five US Presidents, then adds the cake batter of eggs, butter, flour, sugar which he mixes with the liquid date combination, before steaming it for an hour.

The dessert, that’s been served at Buckingham Palace, is finished off with sauce and whipped cream.

He told Delish: ‘This is how we prepared it at Buckingham Palace’ he added that ‘the Queen loved this at Sandringham when it was really cold outside, and when she was at Balmoral, and the rest of the royal family did too.’ 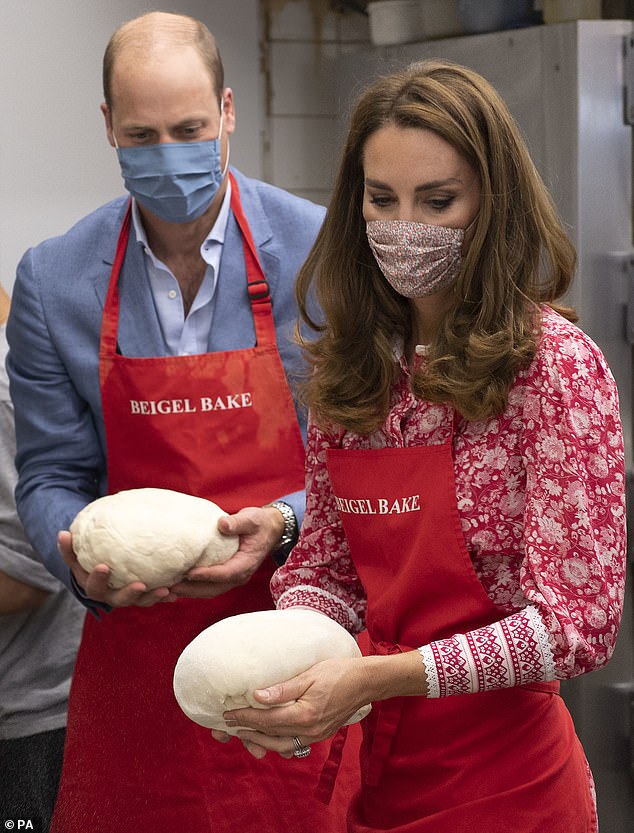 Prince William revealed his daily diet during a trip to Cornwall in November last year.

During a visit at Newquay Orchard, he wrote on a nutrition sheet that he eats two eggs and wholemeal toast with butter for breakfast.

Meanwhile he told nutritionist Monique Hyland he had a ‘rubbish’ sandwich for lunch, before having fish and mushrooms for dinner.

He also revealed he doesn’t drink coffee, but has three cups of tea each day because the ‘kids’ can keep him up and he ‘needs more cups of tea to keep him going.’

The royal went on to say he was likely to have a healthy dish like white fish with mushrooms for dinner.

He said he ‘doesn’t drink coffee’ so drinks ‘two or three cups of tea’ a day, as well as enjoying snacks like bananas and chocolate biscuits or brownies.

Meanwhile he added he might have a glass of red wine each day. 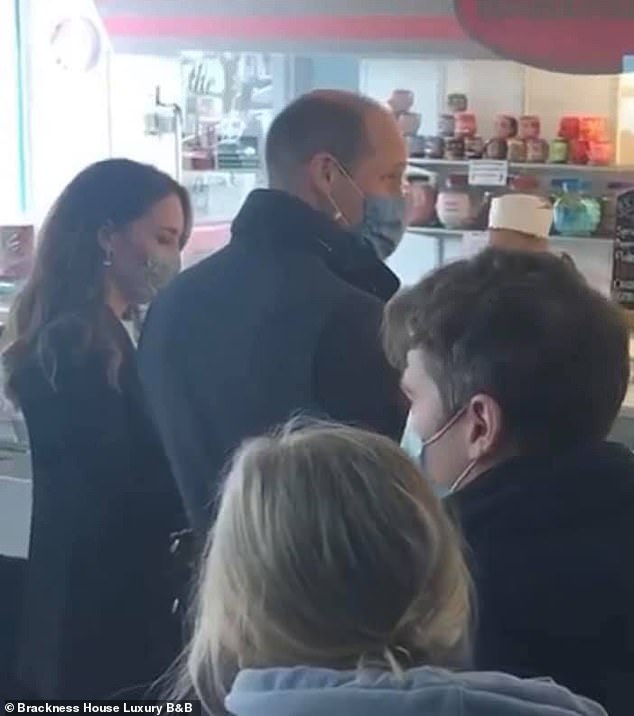 During a Radio 1 interview with Scott Mills for their Heads Together Campaign in 2017 the pair gave an unprecedented glimpse into their surprisingly normal life.

They revealed they enjoy ordering their favourite takeaway curry while lounging in their comfortable clothes watching Homeland or Game of Thrones at Kensington Palace.

Scott asked: ‘So do you ever order takeaways? What’s your favourite?’ Kate admitted: ‘Absolutely and curry – definitely!’

However, when Scott asked if the local takeaways thought someone was pulling their leg when someone placed an order for Kensington Palace, William explained: ‘It doesn’t usually get ordered to the Palace to be honest, normally someone goes and picks it up.’ 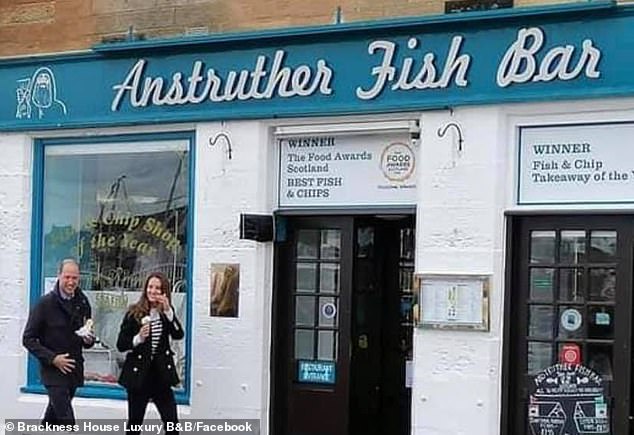 William and Kate popped into the award-winning Anstruther Fish Bar, in the coastal town of Anstruther, some 20 miles east of Fife, where they were ‘regular customers’ while students at St Andrews 20 years ago 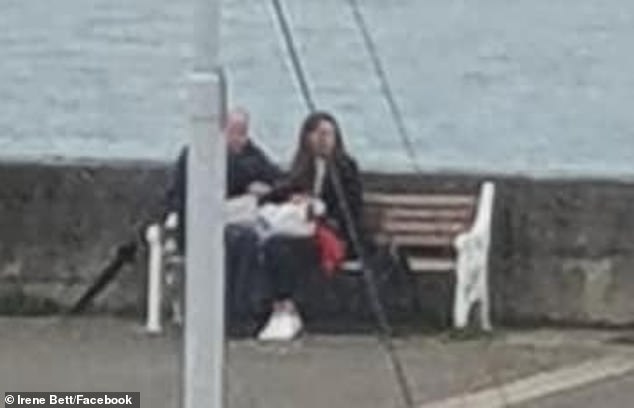 The couple ordered a £7.95 takeaway haddock supper, wrapped in paper, which they ate on a bench on the pier. They returned for ice creams – William’s in a cup, Kate’s in a cone – before returning to Edinburgh by helicopter

The Duke and Duchess of Cambridge stopped off for a takeaway fish supper at their favourite chippy after a busy day of royal engagements yesterday.

William, 38, and Kate, 39, popped into the award-winning Anstruther Fish Bar, in the coastal town of Anstruther, where they were ‘regular customers’ while students at St Andrews University 20 years ago.

The couple ordered a £7.95 takeaway haddock supper, wrapped in paper, which they ate on a bench on the pier. They went back for ice creams – William’s in a cup, Kate’s in a cone – and chatted to staff, with Kate saying it had been a ‘trip down memory lane’.

Delighted residents snapped photos of the couple as they strolled casually down the street and waited in line in the chip shop.

They took their takeaway and sat side-by-side on a nearby bench, away from the main street.

Later the couple returned to the fish bar and picked up an ice cream to go. It is not known what flavours they ordered but the takeaway has more than 70.

To make the sauce, heat the oil and butter in a large saucepan and fry the onion over a medium heat until just softened, then add the carrot and celery and cook for a couple of minutes, stirring.

Use a fork to crumble the mince and add that to the pan, stirring to mix all together. Cook until the meat is no longer pink but do not let it brown. Pour in the wine and continue cooking until it has all evaporated. Then turn down the heat and stir in the milk and nutmeg, and cook over a medium heat until the milk has evaporated. Stir through the tomatoes and purée then season to taste with salt and pepper. Simmer very, very gently, uncovered, for about three hours, stirring from time to time.

When your sauce is ready, bring a big pot of water to the boil and add a teaspoon of salt. Add the pasta to the water, stir well with a wooden spoon and cook as per the packet instructions. Drain well. Divide the pasta between four bowls and add the hot sauce to each serving. Sprinkle with the parsley and serve the parmesan in a small dish.

Previous article
London-born exec who turned down fame to work off-camera is behind Netflix's biggest hits
Next article
Inside the barn-style beach house in Avalon, Sydney with Italian-style pool and wellness space