Were security fears behind Queen cancelling visit to Northern Ireland?

Security fears over the Queen's visit to Northern Ireland may have been the real reason behind her Majesty's last-minute decision not to go, expert


Security fears over the Queen’s visit to Northern Ireland may have been the real reason behind her Majesty’s last-minute decision not to go, experts said today.

The official reason for the Monarch’s eleventh-hour change of plans was that she had caught a seasonal cold and had been told to rest for the ‘next few days’.

But Royal sources today suspected that the health scare may have been something of a ‘smokescreen’ and a leading security expert pointed out that details of the trip had been widely reported in Belfast, revealing where the Queen would be ‘was as dangerous as it gets’.

The trip also came against a backdrop of heightened security coming just five days after MP Sir David Amess was stabbed to death in a suspected terror attack.

And the ecumenical service in Armagh her Majesty was due to attend to mark the centenary of Irish partition and the formation of Northern Ireland had become mired in political controversy after Irish President Higgins turned down an invitation to the event, sparking fury from Unionists. 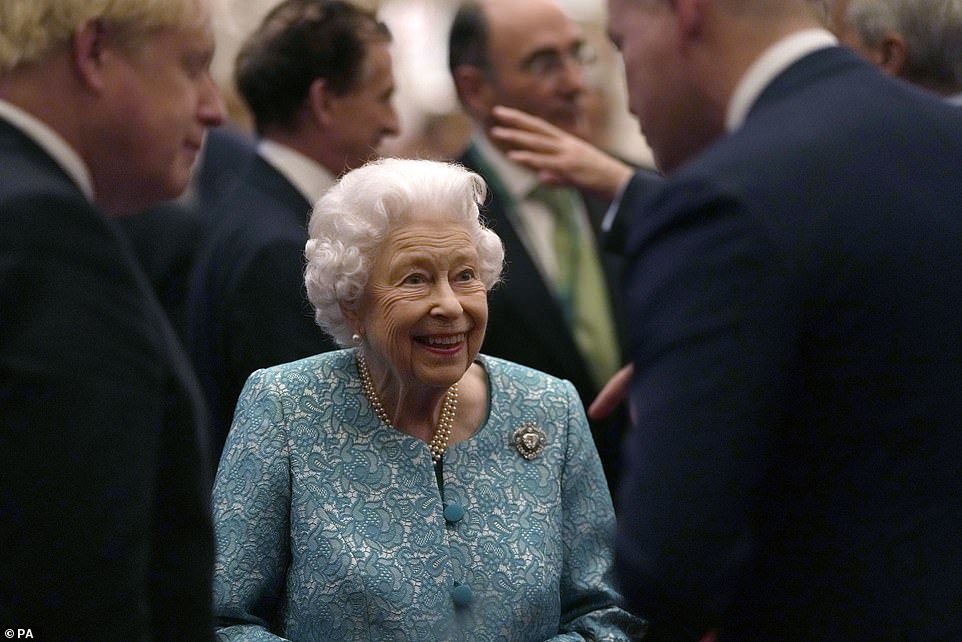 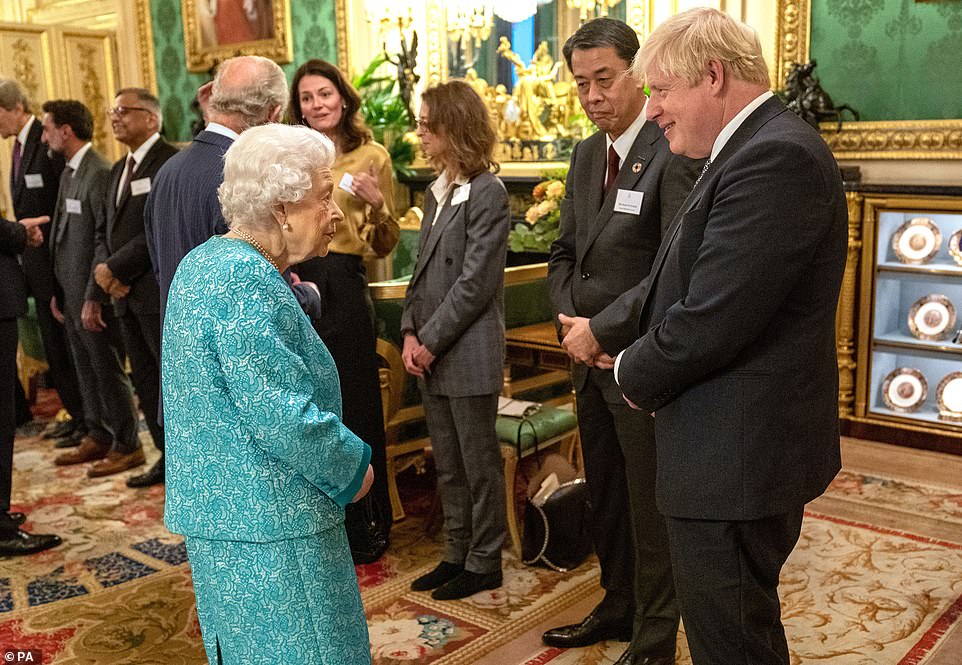 Shortly after the announcement that Her Majesty had a cold, she was spotted driving around her Windsor estate and walking her Corgis.

Today a Buckingham Palace spokesperson insisted: ‘We wouldn’t comment on security matters. However, you will see from the advisory released yesterday that Her Majesty reluctantly accepted medical advice to rest for the next few days.’

In the past, details of Royal visits to Northern Ireland were kept under wraps until the last moment. Off-record briefings would be given to the media on condition that the news would be embargoed until the visit was underway.

Details of her visit were reported in the Belfast Telegraph and the Sunday Independent over the weekend. This came after the visit was previed in the Irish Times four weeks ago. 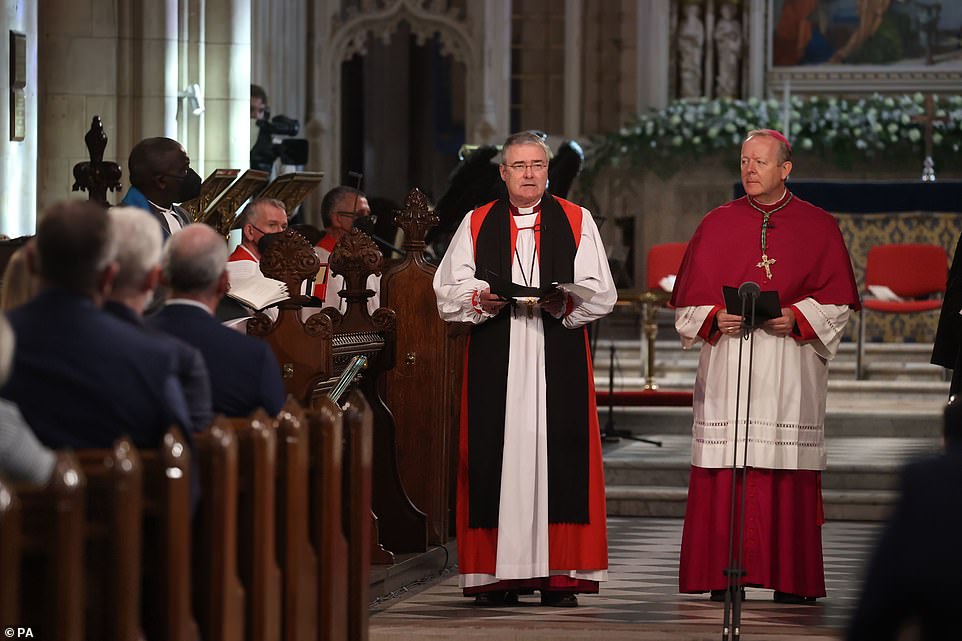 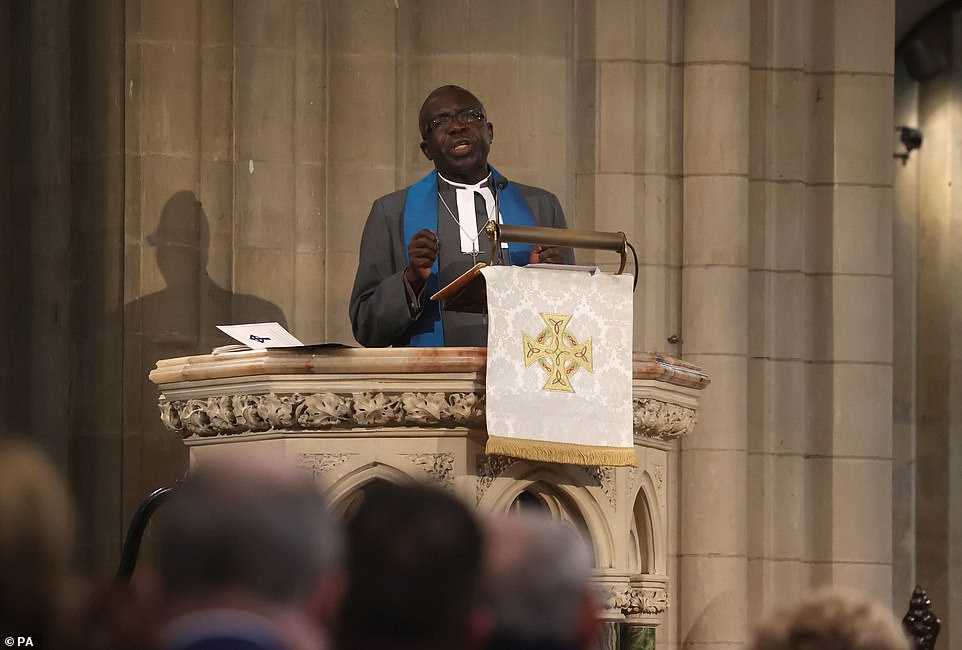 President of the Methodist Church in Ireland, Rev Dr Sahr Yambasu speaking a service to mark the centenary of Northern Ireland at St Patrick’s Cathedral 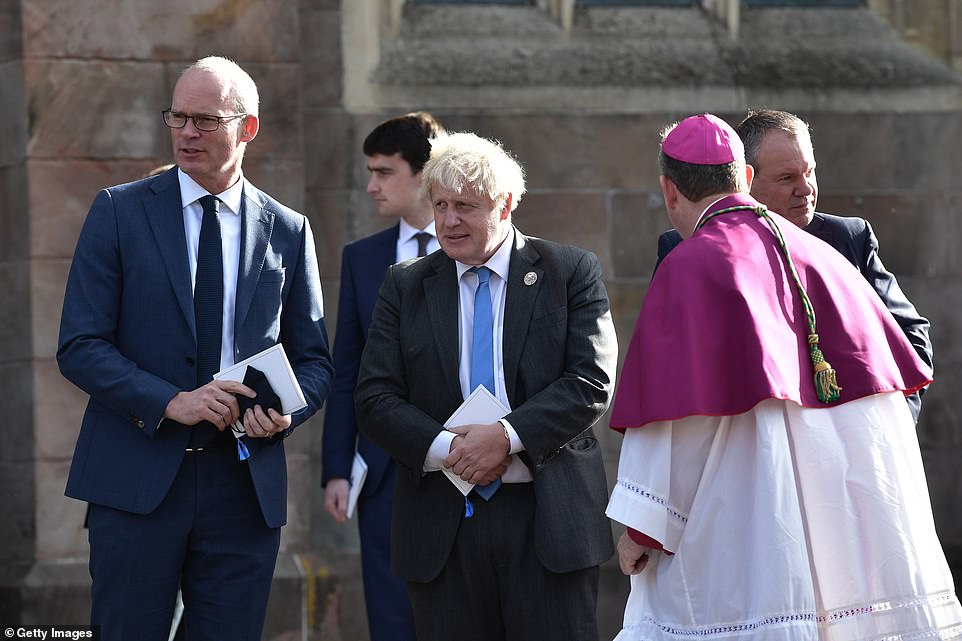 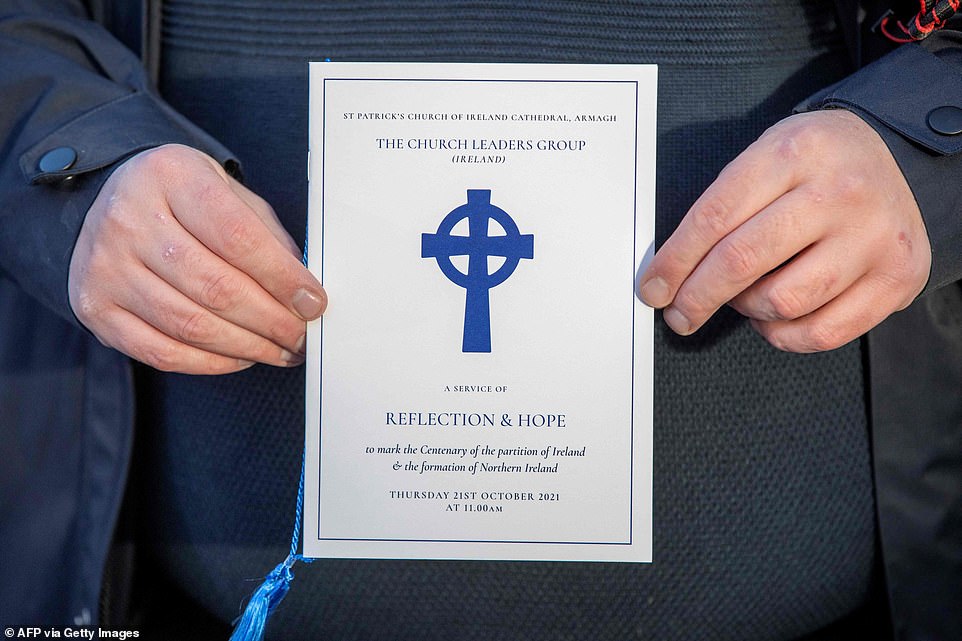 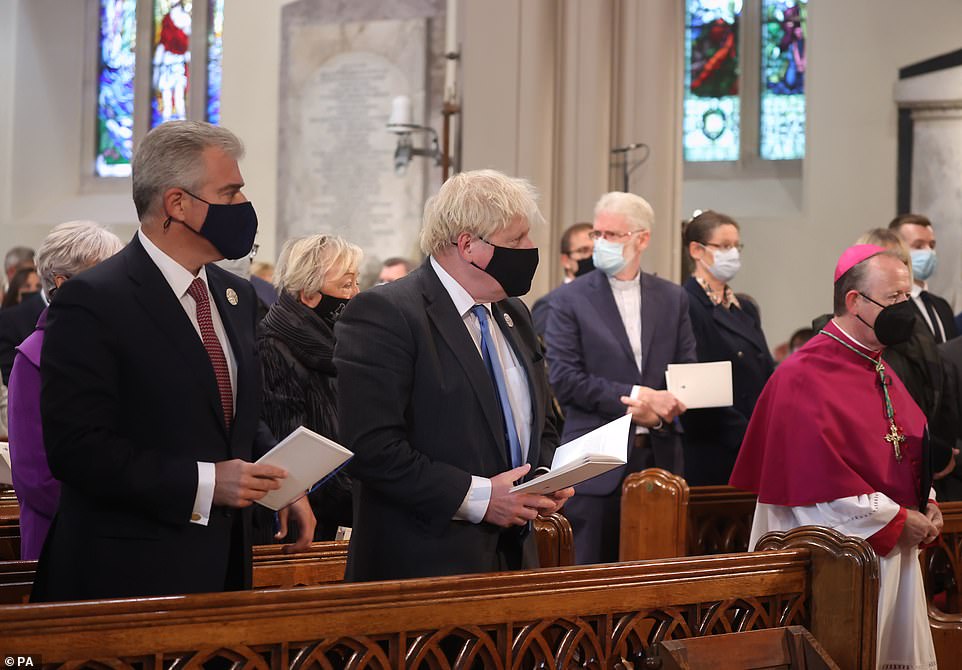 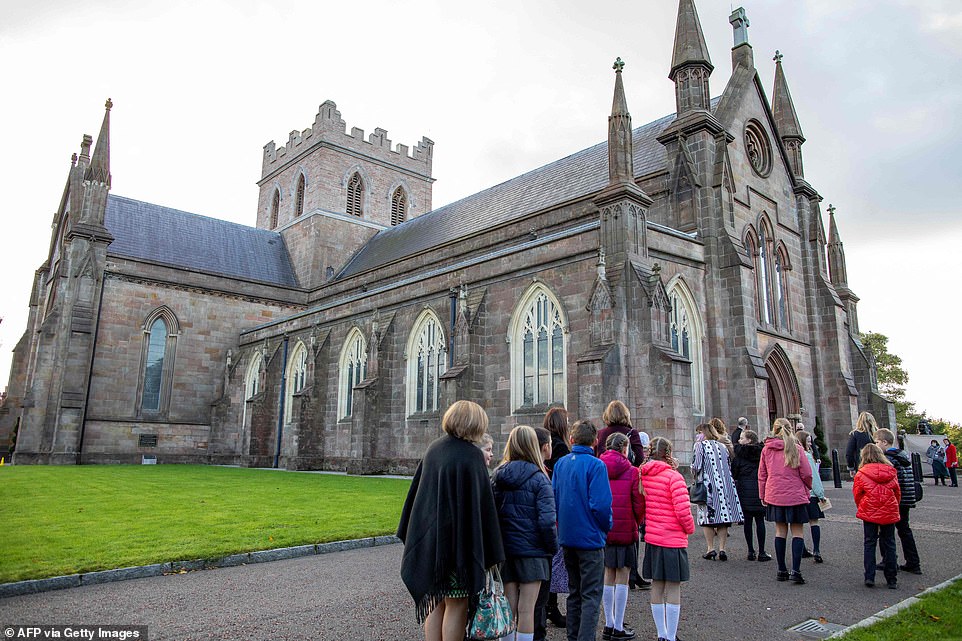 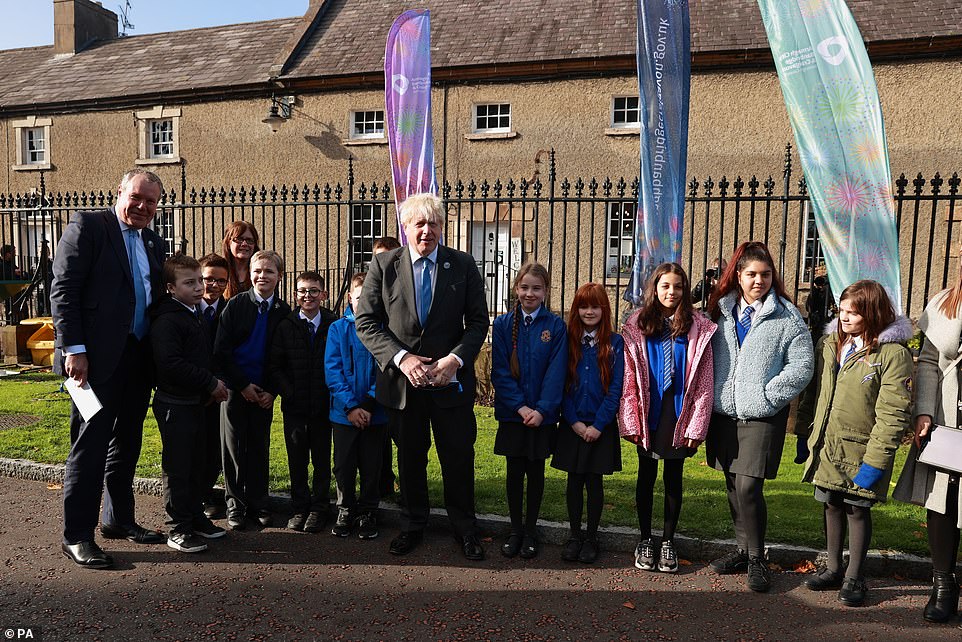 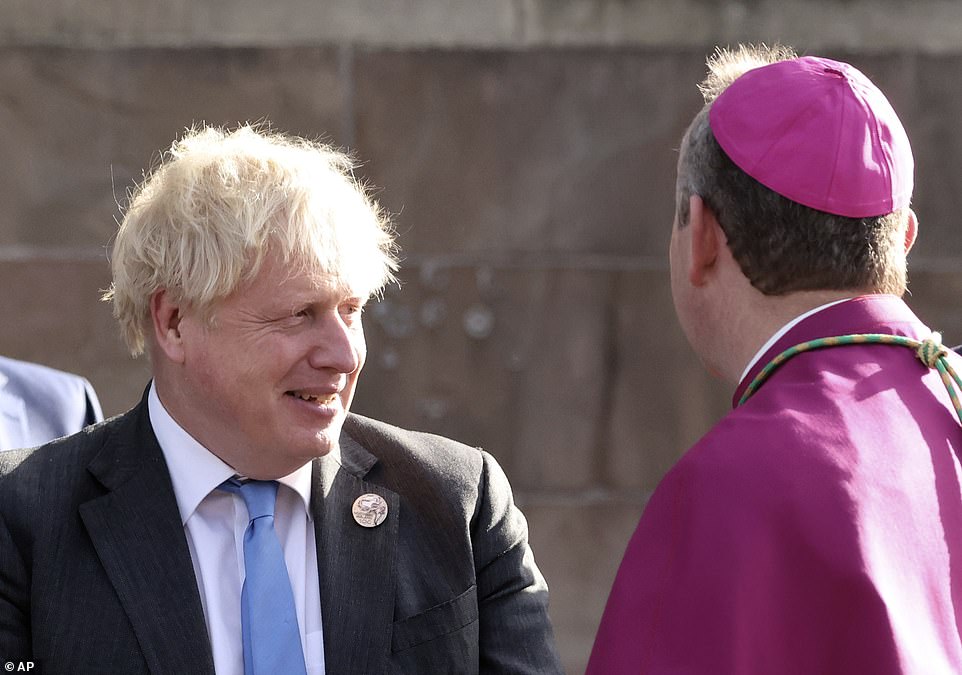 Though security protocols have been somewhat relaxed in recent years, the level of reporting over the Queen’s planned visit was unusually high, highlighting a perceived snub by the Irish President Michael D Higgins who announced he was not going to attend the ceremony.

‘The rejection of this event by the Irish head of state signals to unionists that the presidential office does not respect Northern Ireland as an entity and has little or no interest in a shared future with unionism,’ Sir Jeffrey said last month.

One royal expert told MailOnline that London-based reporters were in place for the Queen’s arrival in Belfast yesterday when her trip was abruptly cancelled.

‘Even before the trip, royal sources were citing the Northern Ireland security protocols and refusing to confirm the details,’ said the source.

‘But at the same time, her itinerary was known by everyone in Ireland. It’s very odd that on the very day the Queen is said to be told to rest under doctor’s orders that she’s seen out and about driving and with her dogs. 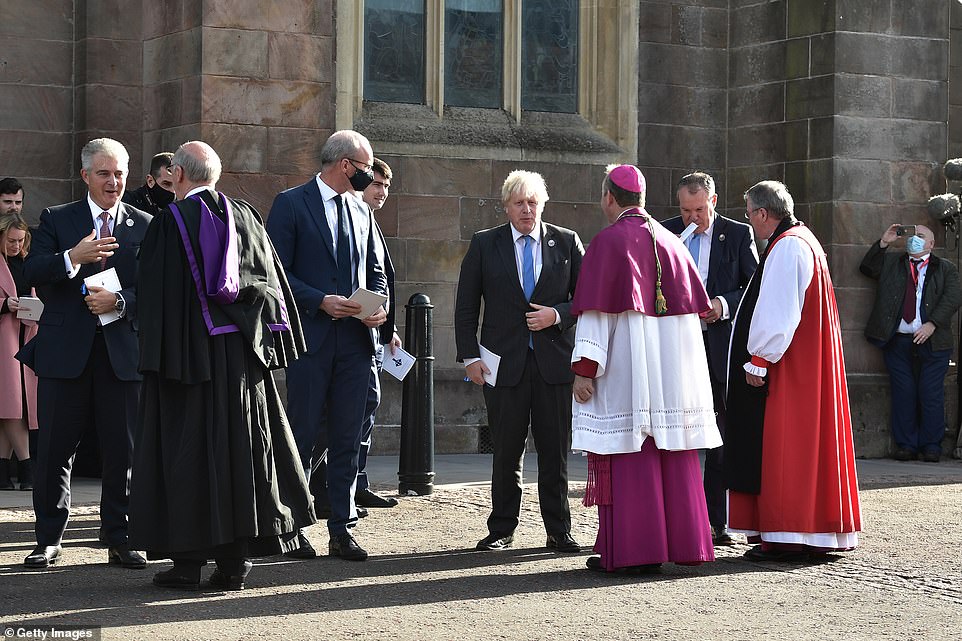 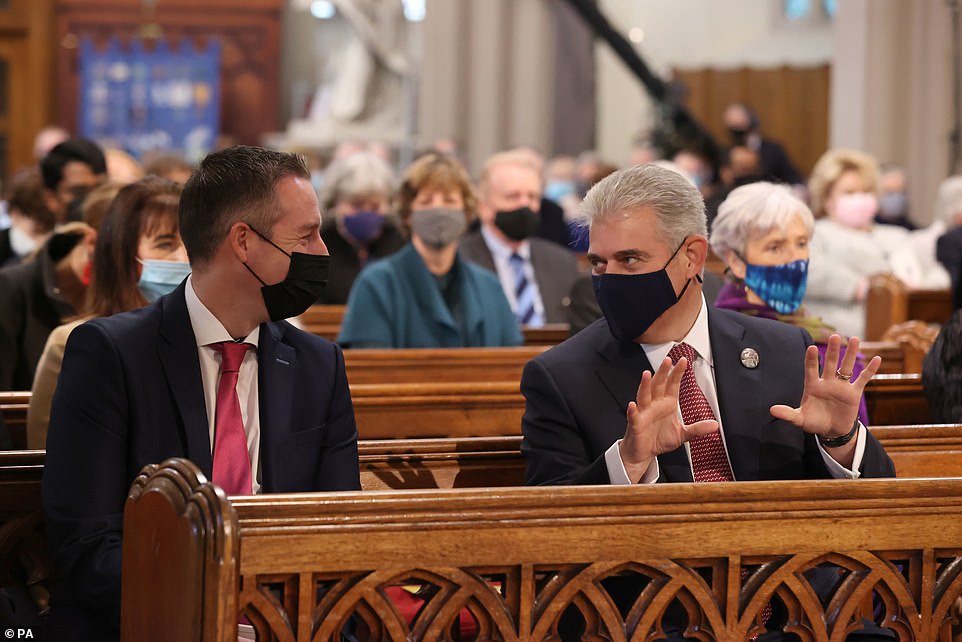 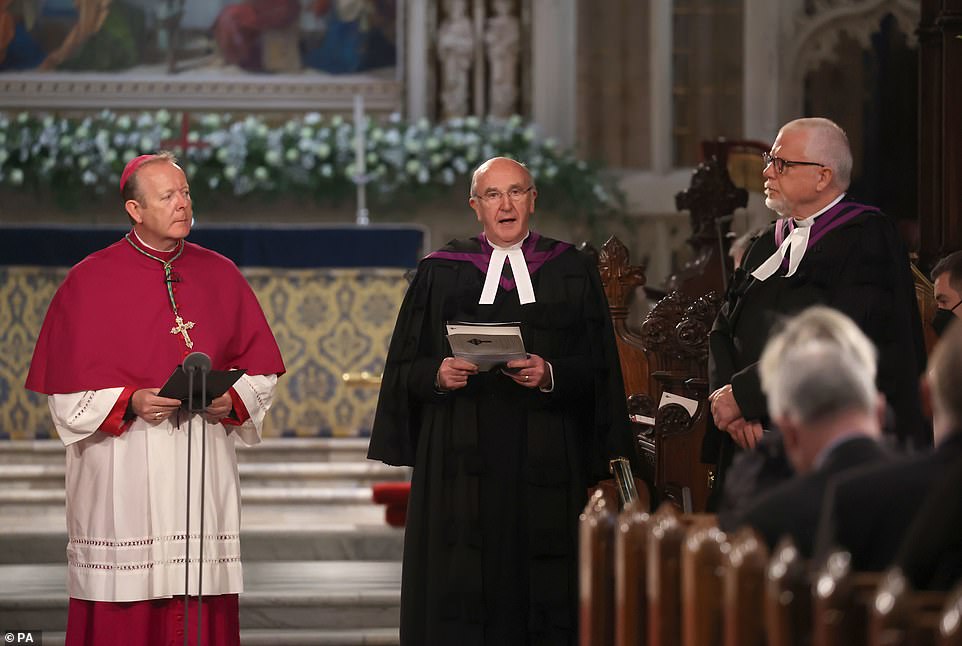 (left to right) Archbishop of Armagh and the Primate of All Ireland Archbishop Eamon Martin, President of the Irish Council of Churches Dr Ivan Patterson and General Assembly Moderator Rev David Bruce during a service to mark the centenary of Northern Ireland 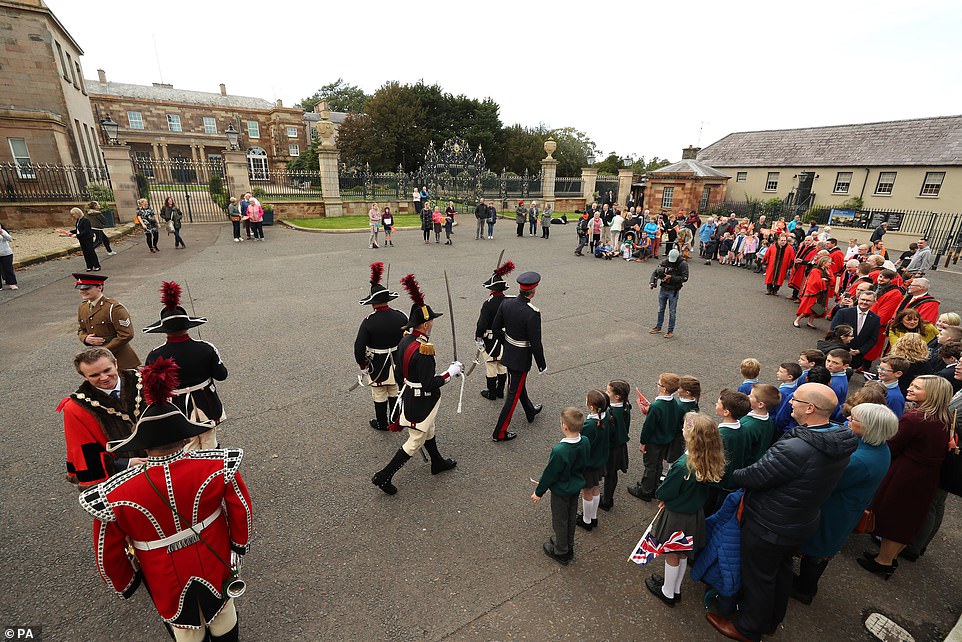 ‘Maybe she did wake up with a head cold, but given the security concerns and the political hot potato the Armagh service had become, perhaps that cold was very well timed?’

Terrorism expert Chris Phillips, ex-head of the government’s National Counter Terrorism Security Office, said it was never helpful to have the Royals’ plans broadcast in advance in Northern Ireland. ‘Of course, the situation there is not like it was 20 years ago, but when you see it reported that the Queen’s going to be at a certain place on a certain day, that’s as dangerous as it gets.

‘Normally the media would impose a news blackout on the event until the Royal in question was actually in place.

‘Now the news leaking out might not be a reason in itself to call off a visit, but it would certainly factor in. Lots of other things have to be taken into account as well, but it’s never helpful. ‘

One of the Northern Ireland dignitaries attending today’s service at St Patrick’s Church of Ireland Cathedral told MailOnline: ‘The security around the Cathedral and on the roads from Belfast today is about as tight as I’ve ever seen.’

Queen, 95, will NOT step back from royal duties but will ‘pace’ her engagements and it’s ‘patronising’ to suggest she should retire, Her Majesty’s former press secretary Dickie Arbiter claims

Royal commentator Dickie Arbiter has said the Queen will not step down, despite concerns over her health after she cancelled a trip to Northern Ireland this week following medical advice to rest for the next few days.

Speaking on GMB this morning, the former press secretary to the Queen, 95, told Richard Madeley and Susanna Reid that anyone asking the monarch to retire was ‘patronising and fighting fire’.

Instead, Mr Arbiter, 81, suggested the Queen would ask officials to ‘pace’ her engagements as she continues her duties as sovereign.

Speaking on ITV today, Mr Arbiter said: ‘The Queen made her feelings very crystal clear when she told the “Oldie awards” to naff off.

‘Remembrance Day is coming up and is sacred in her diary. To suggest she’ll step back is patronising and fighting fire – the Queen will instead ask her officials to pace her engagements more.’

Explaining why the Queen would not step down, Mr Arbiter continued: ‘During her coronation she made a vow in the eyes of god, and you can’t compare that promise to the pope retiring.

‘The Queen has had a very strenuous few days ago, which is why doctors probably advised her to cancel her upcoming trip. It’s a lot to ask of anyone any age – even when she’s not at engagements the monarch has mounds of paperwork to go through.’

He concluded: ‘The officials at Buckingham Palace will be looking very carefully to pace her engagements. There’s only so much Charles, William and Kate can do.’ 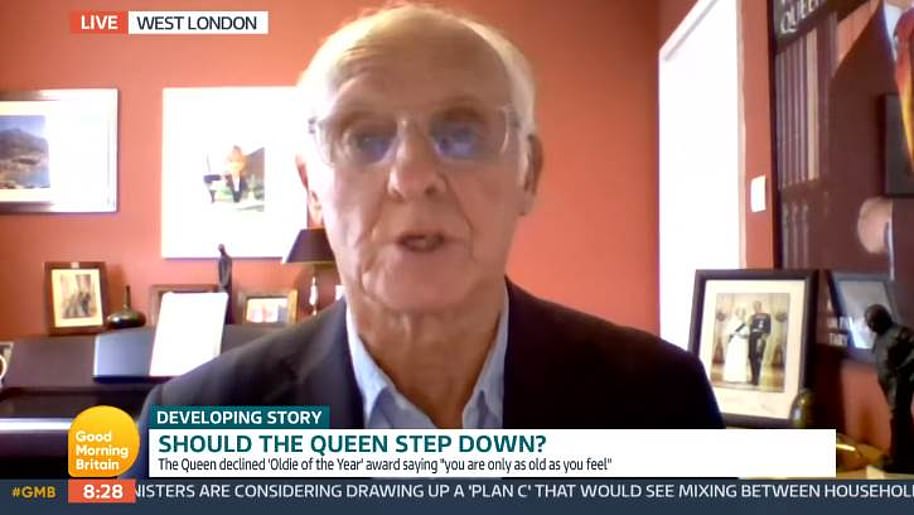 Dickie, 81, suggested the Queen would ask officials to ‘pace’ her engagements as she continues her duties as sovereign.

However, royal biographer Angela Levin argued that the Queen is battling feelings of guilt, and should be encouraged to step down.

She said: ‘The Queen feels very guilty as she made a promise at 21 that she’ll be Queen until she dies, but the Pope made the same vows and has since retired.

‘Things have changed since the royal made that promise and people live longer nowadays. 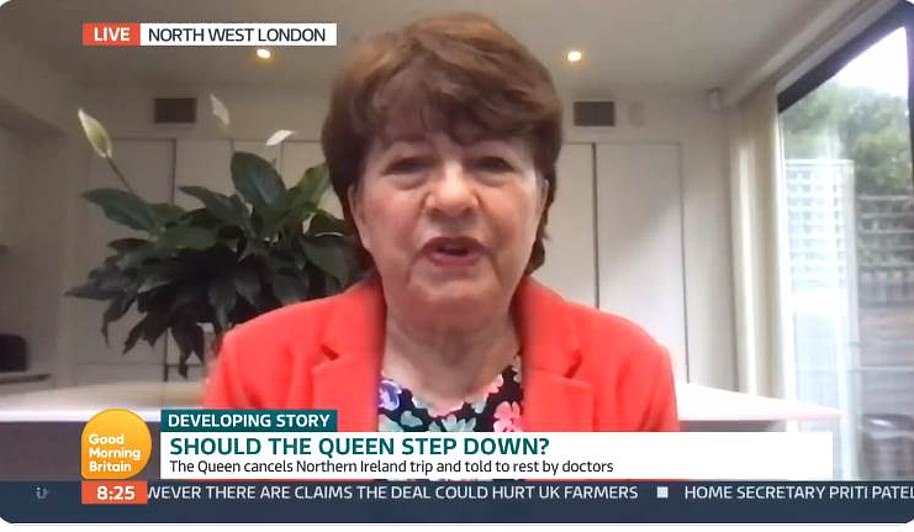 Angela Levin argued that the Queen is battling feelings of guilt, and should be encouraged to step down

‘The Queen is incredibly alert but it’s too much for her physically – at the moment it’s a fight between mind and body – she should be  encouraged to step back slowly.’

Arguing that the Queen should retire after the Platinum Jubilee in June, which marks 70 years on the throne, Ms Levin added: ‘The Queen needs to look after herself and make allowances.

‘Prince Philip said the same thing when he retired and allowed himself a break. We should all be encouraging the Queen to step back and enjoy the rest of her life.’