A mother-of-four fears she will have to tell...
News

The timing for the release of the teaser...
News

We’ve had those fictionalised versions of Charles and Diana in The Crown, now it’s Anne Boleyn’s turn to get the Netflix treatment. New three-part docudrama Blood, Sex & Royalty delivers a very racy take on the story of Henry VIII’s second wife.

It’s more Fleabag than Wolf Hall as Anne talks intimately to the camera, dons flimsy nightwear for a four-poster romp and mocks the king when he makes a fool of himself. Meanwhile, experts are on hand to provide historical context.

Explaining the thinking behind the series, executive producer Ben Goold says, ‘This is a new type of TV hybrid – drama rooted in fact interspersed with documentary interviews. And this is the first in what we hope will be a series of drama documentaries under the Blood, Sex & Royalty banner, featuring rebel royal women.’

Historical advisor Professor Tracy Borman believes Anne – the daughter of middle-ranking English nobleman the 1st Earl of Wiltshire – was the perfect example of a royal rebel.

‘She was a young, intellectual powerhouse who wasn’t afraid to express her opinions at a time when women’s lives were dictated by men,’ says Tracy. 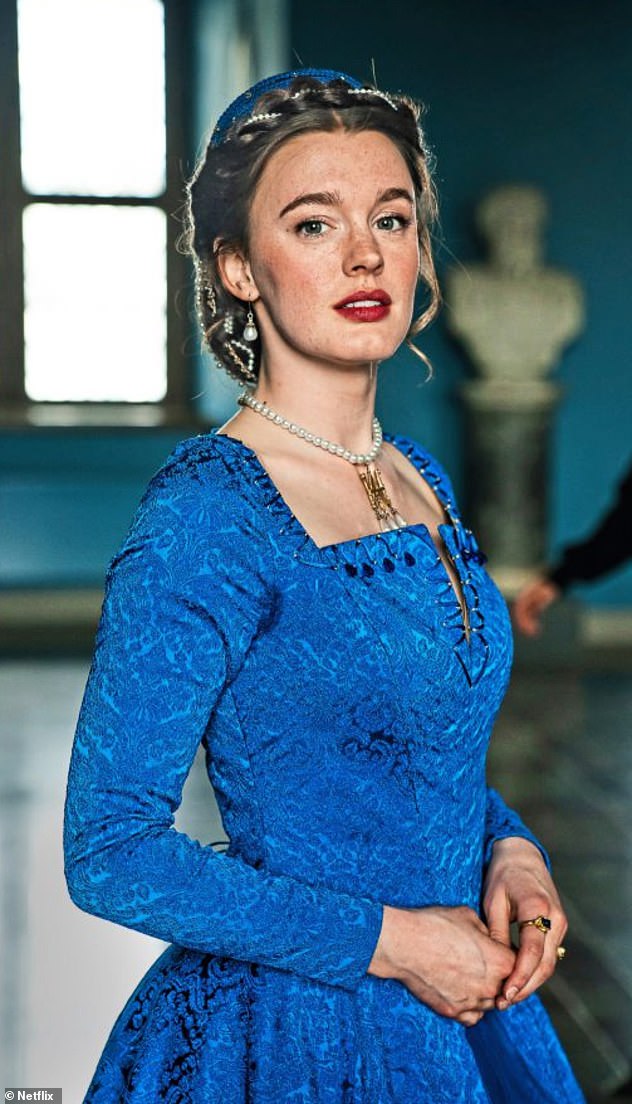 ‘She asked questions that very few dared ask, like: why should the pope be in charge of religion in England, and why shouldn’t people be able to read the Bible in English – why should they have to rely on priests to tell them what it says?’

Citing the work of biblical scholar William Tyndale, Anne suggests Henry should become the head of his country’s church rather than the pope, thus giving him the power to annul his miserable marriage to Catherine of Aragon and marry her instead.

Deeply in love, he seizes upon the suggestion, much to the alarm of his right-hand man Cardinal Wolsey, and the couple become king and queen in January 1533.

Students of history will be aware that things do not end well for Anne (she was beheaded for treason in 1536), but the stars of the series say a rather sweet love story lies at the heart of Blood, Sex & Royalty.

Max Parker, the ex-Emmerdale star who plays the monarch, says, ‘Henry was a hopeless romantic who penned hundreds of love letters to Anne.’

The king wrote about being stricken with the dart of love, and often sent gifts with his notes.

‘I send you, by the bearer of this, a buck killed late last night by my own hand, hoping that when you eat of it you may think of the hunter,’ he said in one.

The series features several scenes of intimacy in which Anne gradually falls under the king’s spell.

On one occasion he invites her to put on a flimsy black nightdress, which Anne says would be perfect for their wedding night.

‘Give me a preview,’ grins Henry, before the couple fall into each other’s arms in front of a roaring fire.

‘There’s a lot of skin in Blood, Sex & Royalty,’ says Max, ‘and because I wanted to make sure I lived up to Henry VIII’s Adonis status I was working hard at the gym!

‘Amy James-Kelly, who plays Anne, and I talked through the intimate scenes to ensure everyone was comfortable in what is an unusual situation. It’s always weird to finish a take and there’s 50 crew watching you!’ 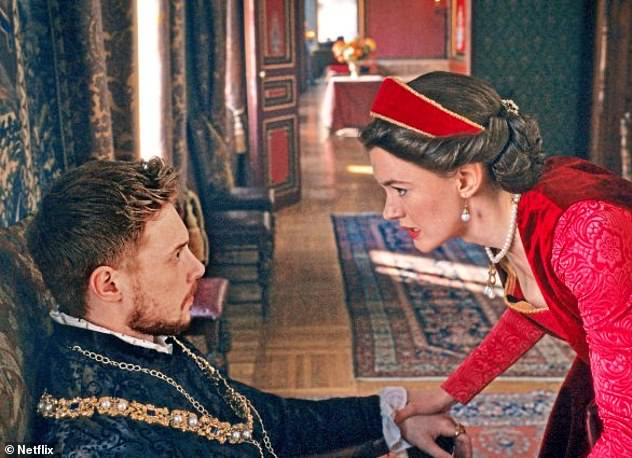 Amy James Kelly pictured with Max Parker as Henry VIII. Max Parker, the ex-Emmerdale star who plays the monarch, says, ‘Henry was a hopeless romantic who penned hundreds of love letters to Anne’

Ben Goold says it was important to emphasise the youth and energy of the main characters. We see a young Henry wrestling and jousting and a bright-eyed, sharp-witted Anne manoeuvring her way through the minefield of court politics.

‘We found locations such as the Palace of the Grand Dukes of Lithuania in Vilnius, the country’s capital, that evoke the kind of bright, grand buildings that Henry and Anne would have lived in. And Anne’s clothes are a further reflection of a world in which young people at court were having the time of their lives – rich with vivid colours.’

Authenticity even stretched to underwear, which consisted of pieces of white cloth sewn together with string. ‘It was like putting on the last layer of your character,’ says Max.

As well as asides to camera, the series uses modern language and music to engage with audiences. Rap and rock are part of the soundtrack, while Anne shouts ‘Gotcha!’ when she tricks Henry, and talks about ‘Team Catherine’ and ‘Team Anne’ when reflecting on life at court.

‘We wanted to make sure the whole thing didn’t feel dusty, and we thought it appropriate to present it in the way we do because Anne’s story feels genuinely modern,’ says Ben. ‘You can relate it to contemporary stories about the struggles women have faced joining the Royal Family.’

Blood, Sex & Royalty is available on Netflix from Wednesday.

Previous article
Now starring in the Only Fools musical, Les Dennis reveals how his career's heartbreak and tragedy
Next article
Ivanka Trump wears high-cut swimsuit as she goes wakeboarding in Miami

A mother-of-four fears she will have to tell...

A mother-of-four fears she will have to tell...