A defender of Prince Harry and Meghan Markle...
Women

A PE teacher and mum-of-two in incredible shape...
News

Prince Harry and Meghan Markle have reignited their...
Women

Kirstie Allsopp groans and throws her hands up in dismay. ‘Why would you do that? Why?’

The TV presenter is talking about Prince Harry’s decision to write a frank memoir about his life in the Royal Family. ‘I don’t think he should have done it. I think you have to be really careful before you write any book about your family, full stop. Never mind if you’re in the Royal Family. No man is an island.’

She is one of Channel 4’s biggest home-grown stars and will be shining again this season with Kirstie’s Handmade Christmas: a daily Bake Off-style contest in which members of the public compete to see who can make the best decorations, toys, stockings, jumpers and other festive delights, followed by a lush primetime celebration of all things Yule and home-made.

But The Honourable Kirstie Allsopp also happens to be the daughter of the 6th Baron Hindlip, and her late mother Lady Fiona was close to the Queen Consort.

Camilla is godmother to Kirstie’s brother Henry, so the Allsopps have an emotional investment in the House of Windsor, and she has heard the rumours that Harry will use his book Spare to attack both his stepmother and his father.

‘But why? I’m a parent. I know I’m not a perfect parent,’ says Kirstie, who is stepmother herself to Hal and Orion, the grown-up sons of her long-time partner, the property developer Ben Andersen. 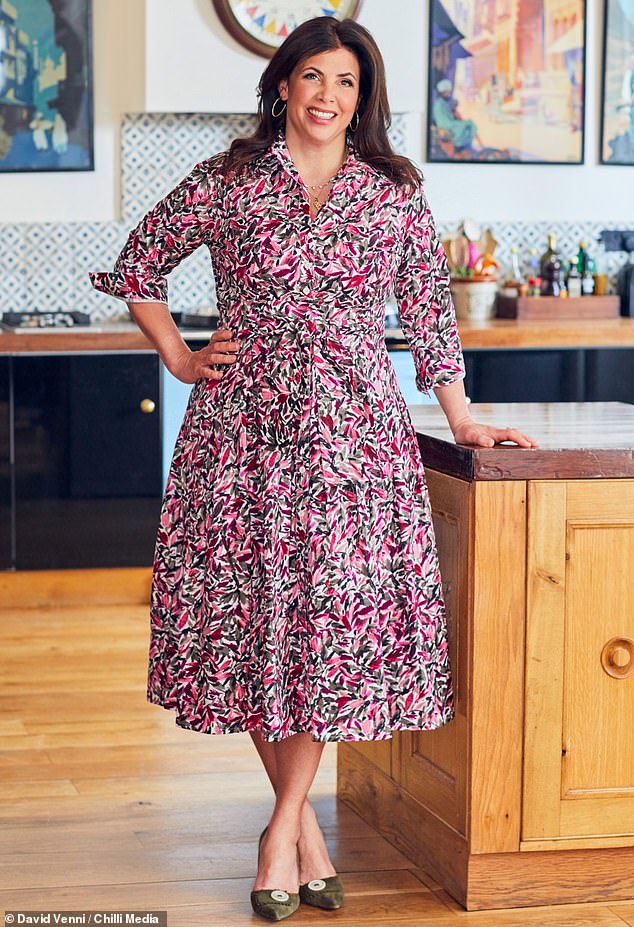 ‘Actually, I don’t know if you’d want a perfect parent, as a child. You need something to rebel against,’ says Kirstie, with real feeling.

The prince has been badly advised, she says. ‘Who was Harry not listening to? Either his advisers are gutless or he doesn’t have any decent advisers.’

Does she think, as others do, that the prince is being pushed into this confrontation by his wife Meghan, Duchess of Sussex? 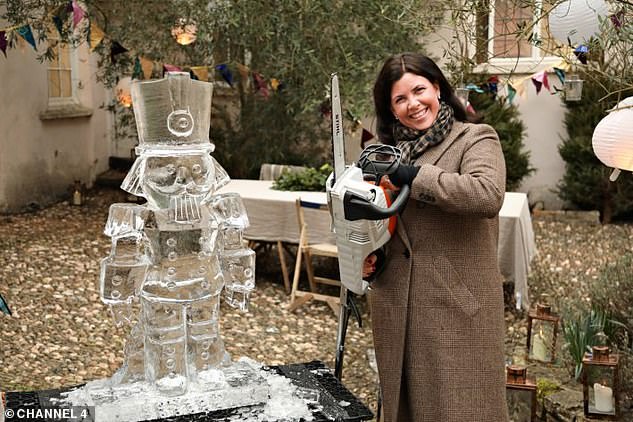 Kirstie pictured with an ice sculpture for her new show. The primetime special also involves the presenter making a choux pastry wreath and brewing up a boozy hot chocolate

‘No, I’m fed up with people blaming her. He’s a grown man. He’s making his own decisions, 100 per cent. His mistake was to marry someone who had a tendency towards the dramatic, but that’s not her fault,’ she says. ‘The opposite of William, who married someone grounded, someone to do the job.’

‘It’s the greatest privilege of my life. I know where Eccles is. I know where Lincoln is. You say somewhere to me and I can see it in my mind,’ says Kirstie, who’s witnessed the way people live, from family homes to tiny bedsits, and visited the kinds of places that royals have to go in the course of their duties, which she thinks the duchess may have perceived as unglamorous.

‘So yes, I’m sure Meghan might have been frustrated that they were couple B, not couple A. I’m sure she might have thought that opening a health centre in Banchory [in Aberdeenshire] might not be the most interesting thing to do, but that’s the job,’ says Kirstie firmly.

‘Do it or don’t do it, but don’t try and be famous in a more glamorous way and knock those royals who are opening the health centre.’ 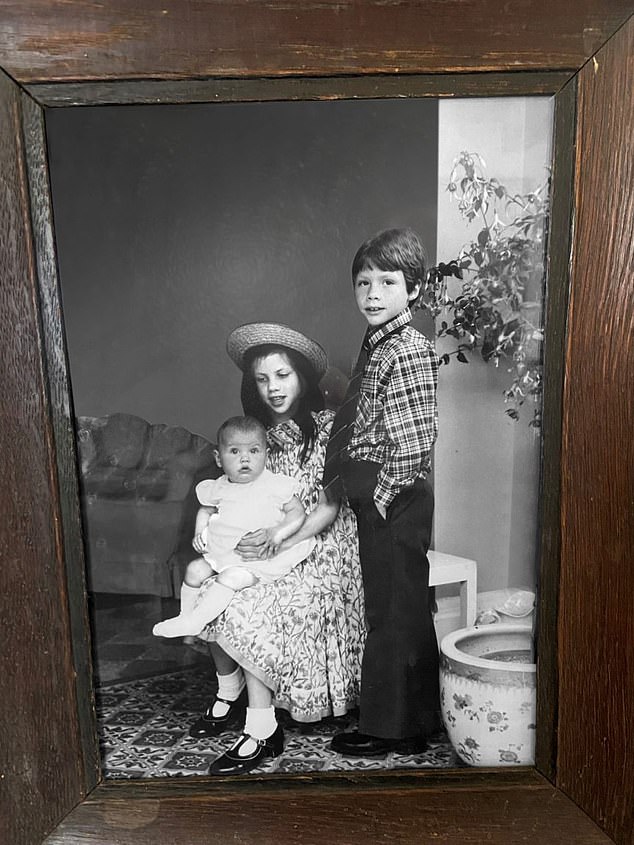 Kirstie and as a child with her siblings, with whom she’s still close. She expects 15 of her extended family for Christmas, which will start the night before

She catches herself and reasserts that Harry is choosing his own way.

We’re in Kirstie’s home in Holland Park, which is not like any of the big, white wedding cake-style houses in the road. The 1950s building was two flats but they’ve been knocked together to make a light and airy home.

There’s no doubt she’s a raging royalist, because coffee is served in vintage coronation mugs (mine is from that of King George VI in 1937).

The new series of The Crown is sympathetic to the late Princess Diana and comes down more heavily against Charles, but Kirstie is aghast: ‘When did we start being so thick that we think anything is that black and white?’

We have to stop being so tribal, she says, then adds, ‘I’m a full-on fan of his.’

One thing Kirstie has in common with the King is a passion for making do and mending. She’s cornered the market in crafting with TV shows and live events like The Handmade Fair.

It’s good for you too, she insists.

‘I don’t have the stats, but anecdotally and from what I’ve seen there’s been a big rise in the number of people making things for themselves over the last couple of years, since the pandemic.’

This is demonstrated by the contestants in Kirstie’s Handmade Christmas. ‘So many times they say, ‘I started doing this in lockdown as a way of coping.’ Or, ‘I’m a carer and this is my release from all that.’ Or else, ‘I suffer from anxiety and this calms me.’ People are extraordinary, they’re learning to do things with their hands that are good for their mental health.’

The primetime special involves Kirstie herself making a choux pastry wreath, brewing up a boozy hot chocolate and even whipping out power tools to help an expert create an ice sculpture in the snow.

That’s not exactly something everyone can do, is it? And isn’t it all a bit extravagant when there’s a cost of living squeeze?

‘I get stressed about the fact that Christmas puts enormous financial pressure on families. It’s a time when people can feel that more than ever. They feel the pressure from the ads on telly, not being able to get their kids stuff. And I’m very aware that crafting doesn’t save you money,’ she says.

‘So I’m constantly saying to the team, ‘What does it cost?”

On the other hand, she’s aware of making feelgood television.

‘Telly is in a bit of a panic about reflecting the cost of living crisis. We’ve got to be very careful about that, because we’re supposed to make people feel better,’ she says.

‘There has to be an element of escapism, we have to respect that and not be too holier than thou.’

Some people will surely ask, how do I do Christmas when I’ve got no money?

Kirstie has used her fame to campaign for many things including greater hospital visiting rights for relatives during and after Covid, and she had a powerful lesson in how important that is this summer.

Her father Charles Allsopp, now in his 80s, suffered delirium after heart surgery.

‘It’s very scary. One of the things you need is familiar voices and faces to ground you, to bring you back to Earth. Luckily, one of the nurses mentioned this to me and we put together a rota where I or one of my siblings was in the hospital all day.’

He was in a private hospital. ‘There are a lot of NHS hospitals that do allow you to sit with your family members during the day, but there are hospitals that are still restricting visiting to one hour a day, which is wrong.’

How is her father now? ‘He’s on the mend. I’m glad we could flex our lives around this, but it reminds you how hard it is for people. I make a very good living and have great people who work for me – and even then it was a real struggle. So imagine what it’s like if you don’t have that support.’

‘Try to do it with as many people as you can. The best way to do something cheaper is to do it bigger and split the costs,’ she says.

‘Really talk about it with your family: ‘OK, we’re all feeling the pinch. Let’s heat one person’s house to the max. Let’s put what we’ve each got in the pot.’ We all know families have rows over Christmas, so it’s not as easy as all that, but it is the answer to your question.’

She sighs. ‘God willing, this crisis will not last forever.’

Kirstie is tight with her extended family and the Allsopps are quite a brood.

‘My father had four children and we’re very close. We have a WhatsApp group. We all live close to each other, so it’s quite thick.’

Kirstie expects 15 of her extended family for Christmas, which will start the night before with a carol service at a neighbour’s house and a supper of ham, mash and peas.

Get to bed as early as you can, that’s Kirstie’s top festive tip. ‘The reason Christmas results in so many meltdowns is because people stay up too late. They only have five hours sleep, then they have quite an emotionally charged day.’

Has that happened to her? ‘Of course, we’ve had scarring Christmas days, we’ve had the Christmas when Ben and I have had a row and we’ve been through all the tears. Don’t be a martyr and do all the work yourself, and don’t try to live up to someone else’s ideal,’ she says.

So when it comes to food, eat what you like. ‘If you want dirty martinis and oysters, have that. One year we had takeaway pizza. The children were thrilled.’

Now they have a new tradition.

‘Christmas lunch is, shockingly, steak and chips. I don’t think I’ve admitted this before. It’s what the children like. We have a deep-fat fryer, which stays outside. Ben barbecues the steak, which is always from the same Devon butcher.’

And there’s one last tip. ‘If you know your husband is going to balls up your Christmas present and there’s going to be a row, head it off at the pass. Get on the phone to your sister-in-law and ask her to offer help.’

Is Ben any good at presents? ‘He buys me jewellery,’ she says, spinning a pair of golden bangles on one wrist.

‘These were made by a friend of mine in America called Alicia Fox and then engraved. This one says, ‘I love you.’ And this one says, ‘Every day.”

I ask about what she’s wearing and Kirstie says, ‘It’s the silliest dress ever, from an American designer called Ulla Johnson. It’s almost exactly the same dress Laura wears running down the hill on [70s TV series] Little House On The Prairie. It’s a daft dress, but I love it and I’m wearing it into the ground.’

And that’s the thing about Kirstie Allsopp: she can laugh at herself, she knows who she is and how absurd that can look sometimes to those of us with less, but she is genuine.

‘There is no way I could have gone into this and lied about where I come from, the level of privilege that I have. The most patronising thing is to pretend. I hope people see the person I am and realise I really am trying my best.’

Previous article
From mince pies with a twist to an indulgent chocolate log, why not get ahead for the season
Next article
The Addams Family's creepy teenage daughter is the star of this kooky new comedy

A defender of Prince Harry and Meghan Markle...

A defender of Prince Harry and Meghan Markle...