The quirky brilliance of Netflix’s fresh take on the Addams Family stories can be summed up in the first words uttered by its demented yet loveable heroine.

‘I’m not sure whose twisted idea it was to put hundreds of adolescents in underfunded schools run by people whose dreams were crushed years ago,’ says Wednesday, as she walks down the corridor of a traditional American high school. ‘But I admire the sadism.’

The action starts with Wednesday, now a teenager, being thrown out of school (she dropped piranhas into the water polo pool), so her parents decide to send her to their old school Nevermore Academy, which is just the place for outcasts.

There she navigates adolescence and the school social scene (the main cliques are werewolves, vampires, gorgons and sirens), experiences first love – reluctantly – and tries to thwart a killing spree in the local town, Jericho. 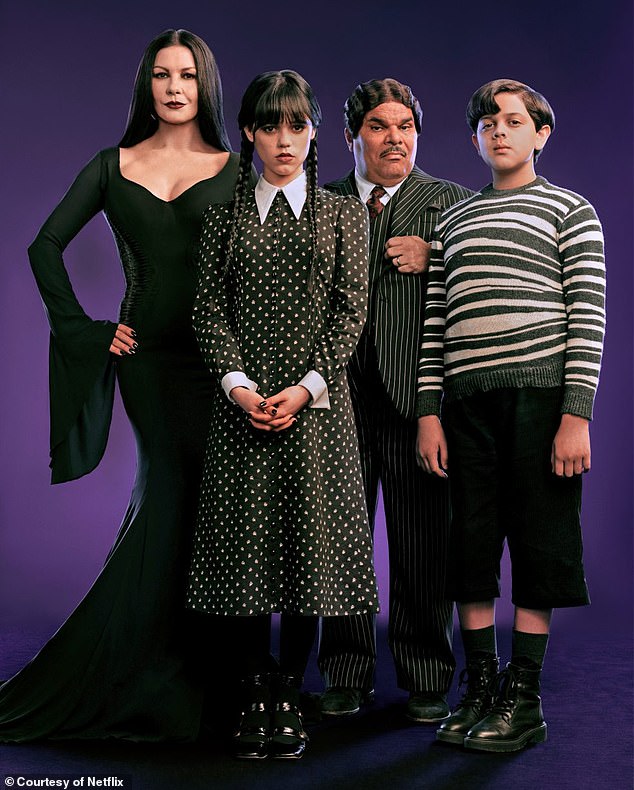 The action starts with Wednesday, now a teenager, being thrown out of school. Pictured left to right: Catherine Zeta-Jones as Morticia Adams, Jenna Ortega as Wednesday Addams, Luis Guzmán as Gomez Addams and Issac Ordonez as Pugsley Addams

The Addams Family was created by cartoonist Charles Addams in the New Yorker magazine in 1938, and in 1964 the first live-action TV series premiered. Since then there have been films, cartoons, more TV series and an award-winning musical in 2010 that has become a favourite for high schools to put on – one of the reasons Netflix immediately gave this new version the green light.

‘There is no other show, on an international level, that generations know,’ says Catherine Zeta-Jones.

‘From young to old, from Wales to Washington, we know what The Addams Family is. I remember thinking it would be so cool to be one of them – they seem so happy being as crazy as they are. Now we’re bringing the story into the 21st century.’

This latest adaptation is special not only because of the strength of its cast and its snappy writing, but also because it comes with the stamp of Oscar-winning director Burton in his first-ever TV series. He helped create the aesthetic of the show and also directed the first four episodes. 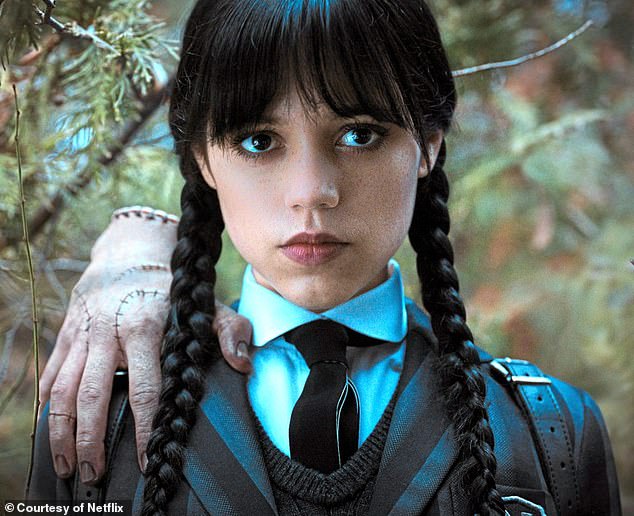 Wednesday’s aesthetic is purely black and white, and there was a rule on set that no one on screen, other than the Addams family, could wear either colour. Pictured: Jenny Ortega

‘My first love was Addams Family cartoons and drawings,’ says Tim, who has often re-created their Gothic look in his work. ‘I think all families are strange and The Addams Family is symbolic of how I feel about that. When I was a child I used to play in a cemetery near my house and I felt like Wednesday in a certain way. The script brought up those feelings you have in school, like you don’t fit into society and life.’

The producers scoured the globe to find their Wednesday, who had to have the right mix of confidence and mystery with a hint of heart. They landed on Jenna Ortega, 20, who found fame in Netflix thriller You.

The show brings up those feelings that you have in school, like you don’t fit into society and into life

‘No matter how good the writing was, without the right Wednesday the show wouldn’t exist and we were very aware of that,’ says Tim. ‘Jenna is like a silent movie actress in that she’s able to convey things without words.’

Key to getting Wednesday just right was her look – and producers went to astonishing lengths to pin it down.

Wednesday’s aesthetic is purely black and white, and there was a rule on set that no one on screen, other than the Addams family, could wear either colour.

The costume department looked at vintage clothes as well as the outfits of singer Billie Eilish to give Wednesday a look that’s both contemporary but slightly out of kilter. And working out her plaited hairstyle took days.

‘Two braids are a lot more difficult than you might think,’ Jenna recalls. 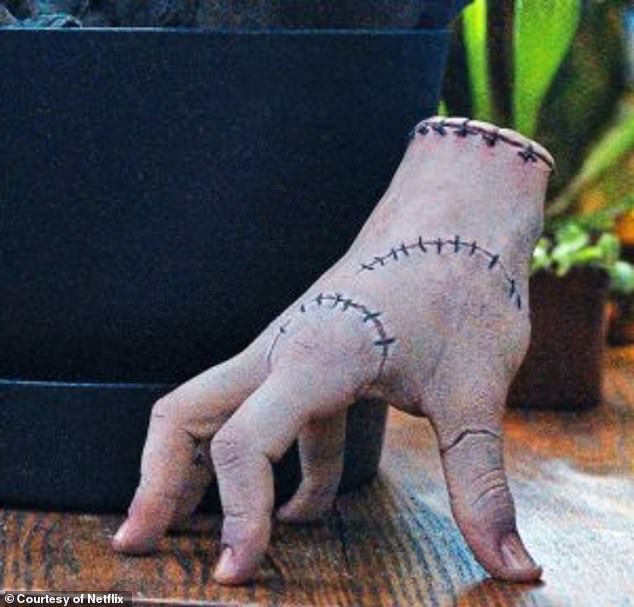 Tim Burton helped create the aesthetic of the show and also directed the first four episodes (pictured, Thing in Wednesday)

‘They spent three hours trying different sets of extensions, just over and over. Tim would say, “Oh, that’s too thick,” or “That’s too thin,” or “It’s not frayed out.” He actually got the hairdresser’s comb and put my fringe in the exact place he wanted it and then had them spray it. For the rest of the week my hair was in that exact position.’

Jenna also learned fencing, archery, German and how to play the cello for the role, and went on long walks to get Wednesday’s gait exactly right.

The series was filmed in Romania with Cantacuzino Castle in the Carpathian Mountains the location for the Nevermore Academy.

Seventy other locations were used in the country, as well as six huge soundstages where the local town of Jericho was built from scratch.

Christina Ricci, who played Wednesday in two films, appears as one of her teachers while elements from the 1960s series are signposted throughout the series – for example a stuffed bear in the office of Wednesday’s headmistress Principal Weems (Gwendoline Christie) is a nod to the one in the original Addams house.

‘This version has contemporised an iconic family,’ says Catherine Zeta-Jones. ‘There’s an honesty and a truth about the characters. It’s everything you would wish it to be and I can’t wait to watch it myself.’

Wednesday starts on 23 November on Netflix.

Previous article
The queen of make-do-and-mend reveals her tips to prevent those 'scarring' festive squabbles
Next article
Now starring in the Only Fools musical, Les Dennis reveals how his career's heartbreak and tragedy