The 51 coolest neighbourhoods in the world for 2022 named by Time Out, from Mexico to Margate

Colonia Americana in Guadalajara, Mexico, has been named the Coolest Neighbourhood in the World to visit right now by Time Out.

It’s ‘an edgy blend of Art Deco and neoclassical mansions… contains some of the city’s best music venues’ and tops a 51-strong ranking designed to ‘help travellers and residents get under the skin of the world’s most distinctive city neighbourhoods’.

Dave Calhoun, Chief Content Officer North America & UK at Time Out, adds: ‘Each year we ask our international Time Out audience and our global team of local Time Out experts to nominate the areas of cities right now which have the best mix of cutting-edge culture, affordable food and drink, street life, nightlife and community. They are not homogenised, corporate destinations but areas that have an independent and welcoming vibe.’ The runner-up spot goes to Cais do Sodre in Lisbon, the top-ranked spot in America is Ridgewood in New York, which comes fourth overall, and the UK’s Cliftonville in Margate storms into the top ten. Scroll down for the full list… 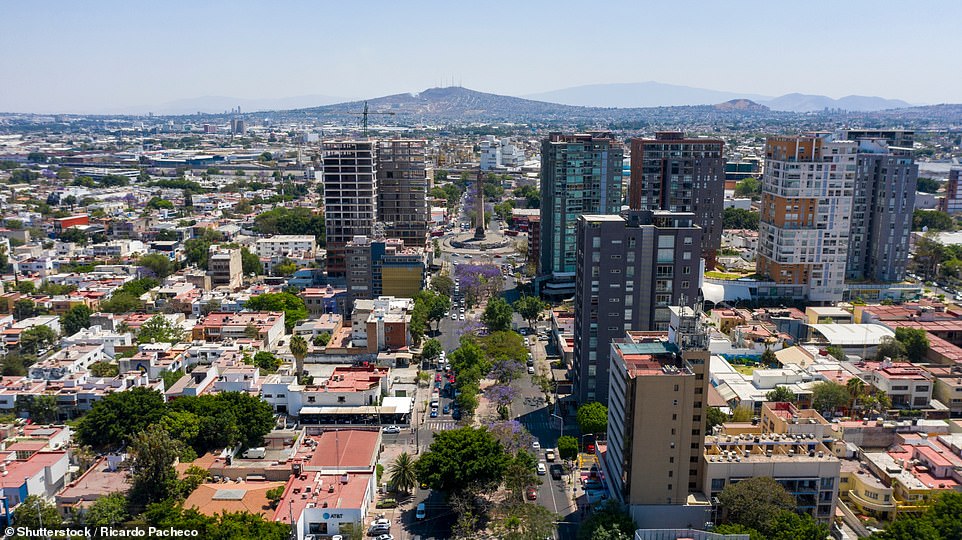 Coolest-neighbourhood-in-the-world Colonia Americana in Guadalajara (above), is ‘an edgy blend of Art Deco and neoclassical mansions with artists’ squats and warehouses containing some of the city’s best music venues’ 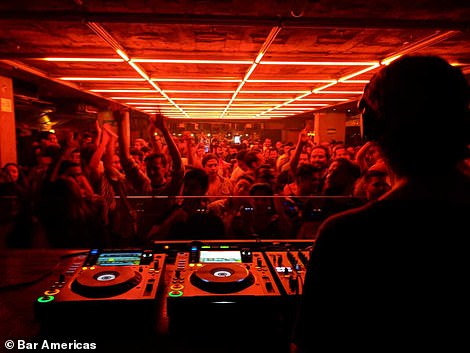 According to Time Out, Colonia Americana is the ‘epicentre’ of the underground scene in Guadalajara, ‘known by many Mexicans as the country’s cultural capital, but little explored by foreigners’.

The guide continues: ‘[Colonia Americana] is an edgy blend of Art Deco and neoclassical mansions with artists’ squats and warehouses containing some of the city’s best music venues – shout out to Segundo Piso Music and Bar Americas (pictured): Latin America’s answer to [Berlin club] Berghain.’

It adds: ‘Creative locals sit with their laptops in any number of sleek cafes (try Cafe Correcto or Lluvia) and sip local tequila in dive bars on Chapultepec Avenue long into the night.’

The perfect day, according to the guide, would include browsing contemporary art in gallery Tiro Al Blanco before tucking into chilaquiles and coffee in its courtyard cafe, Modo. 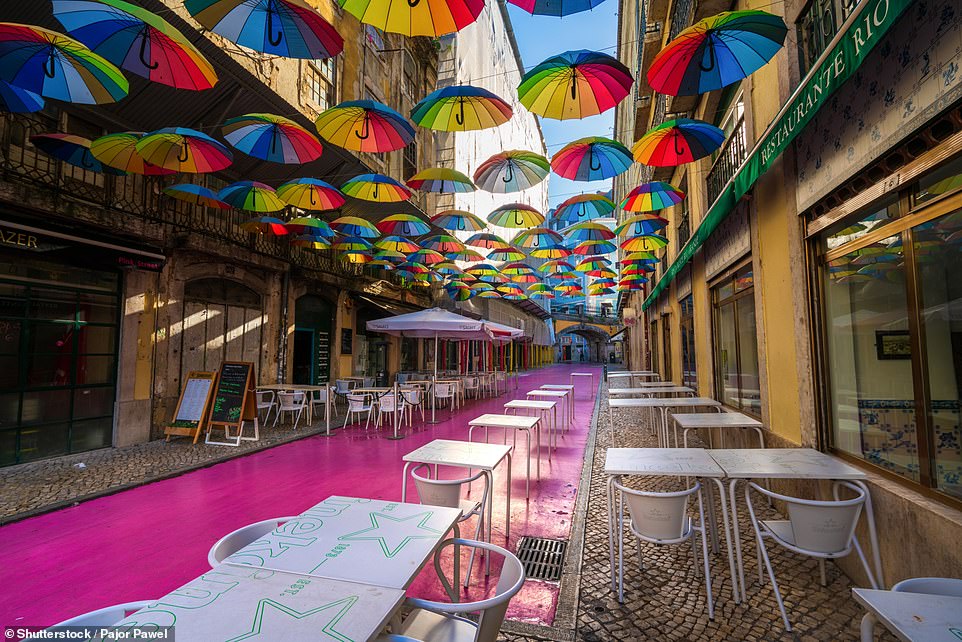 Cais do Sodre, the runner-up in Time Out’s neighbourhood ranking, is anchored by ‘Pink Street’ (above)

‘Cais do Sodre has been the heart of Lisbon’s nightlife for a good few years now,’ says Time Out, ‘but in 2022 it’s more popping than ever.’

It continues: ‘Anchored by “Pink Street” (the dazzlingly painted Rua Nova do Carvalho) and its colourful umbrellas, this is the neighbourhood where Lisbon’s most promising young chefs are opening new restaurants, where small businesses are springing to life, where much-loved bars and nightclubs are finally rising from the ashes of the past few years.’

The perfect day? That would include a visit to ‘Dear Breakfast’, ‘an all-day-brekkie spot on the Santos fringes’, says Time Out, plus further pitstops in Market Lisbon (‘there’s always something new being served up here’) and ‘Quiosque de Sao Paulo’, which is ‘a cool spot for a beer and some typical Portuguese snacks’. 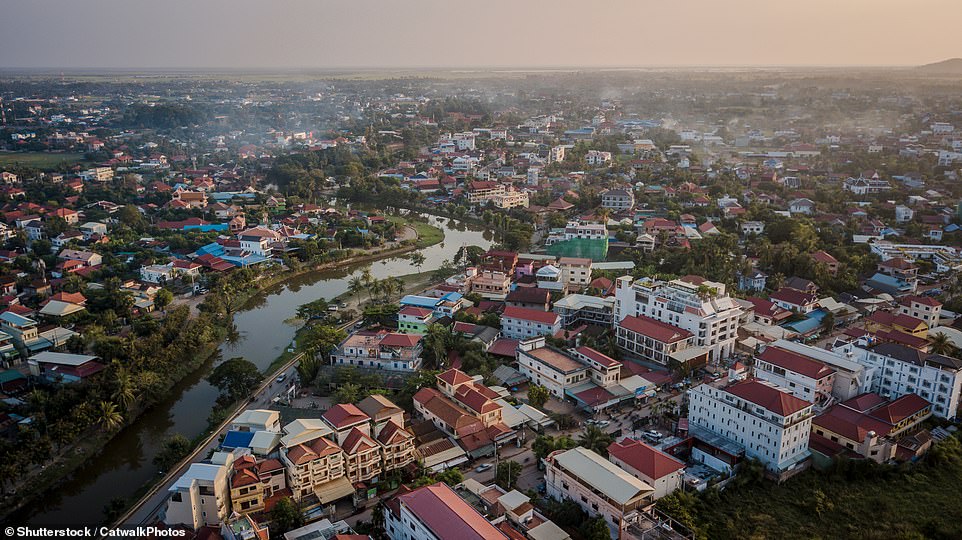 Wat Bo Village, which finishes third in the ranking, is now ‘an incredibly chic quarter’ in Siem Reap (above) 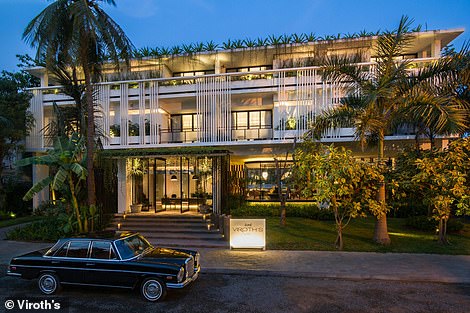 Siem Reap’s Wat Bo Village – or ‘Temple Town’ – was first developed as tourism descended in the 1990s, reveals Time Out, but a 2021 city-wide makeover ‘kickstarted a serious glow-up’. 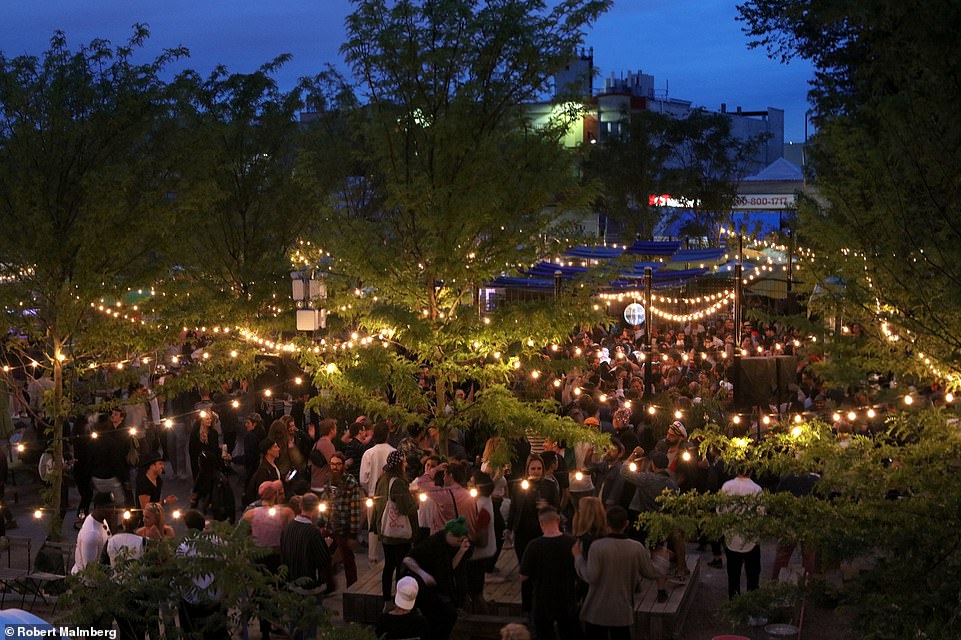 Ridgewood, which ranks fourth, is ‘old-school-meets-trendy’, says Time Out. Above is the neighbourhood’s Nowadays bar 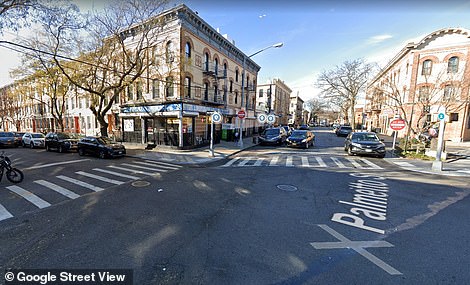 ‘Ridgewood, Queens,’ says Time Out, ‘sits close by the Brooklyn border, pulling in the best of each borough – the diversity and local vibes of Queens and the hip offerings of Brooklyn, specifically neighbouring Bushwick.

‘Ridgewood’s identity, though, is old-school-meets-trendy with a mix of landmark staples, like Rudy’s Bakery and Gottscheer Hall, and buzzy new bars and restaurants such as The Acre, Evil Twin and Cafe Plein Air.

‘While (like all NYC neighbourhoods) it’s constantly evolving, it keeps its past intact with an impressive ten historic districts, including the rows of two-storey brick houses that define the neighbourhood. In fact, Ridgewood harbours the oldest surviving stone-built Dutch colonial house in NYC: the Vander Ende-Onderdonk House, originally built in 1709.’

The ‘perfect day’ itinerary should include a stroll along the Central Ridgewood Historic District (Madison Street down to 71st Ave and from Fresh Pond Road over to Onderdonk Avenue) and dinner at Porcelain and drinks at Julia’s, says Time Out.

The guide is also a huge fan of the neighbourhood’s Nowadays bar (above) – ‘a 16,000-square-foot space that acts as both a charming backyard with hammocks and picnic tables and a nightlife hotspot with dancing and a solid selection of beer’. 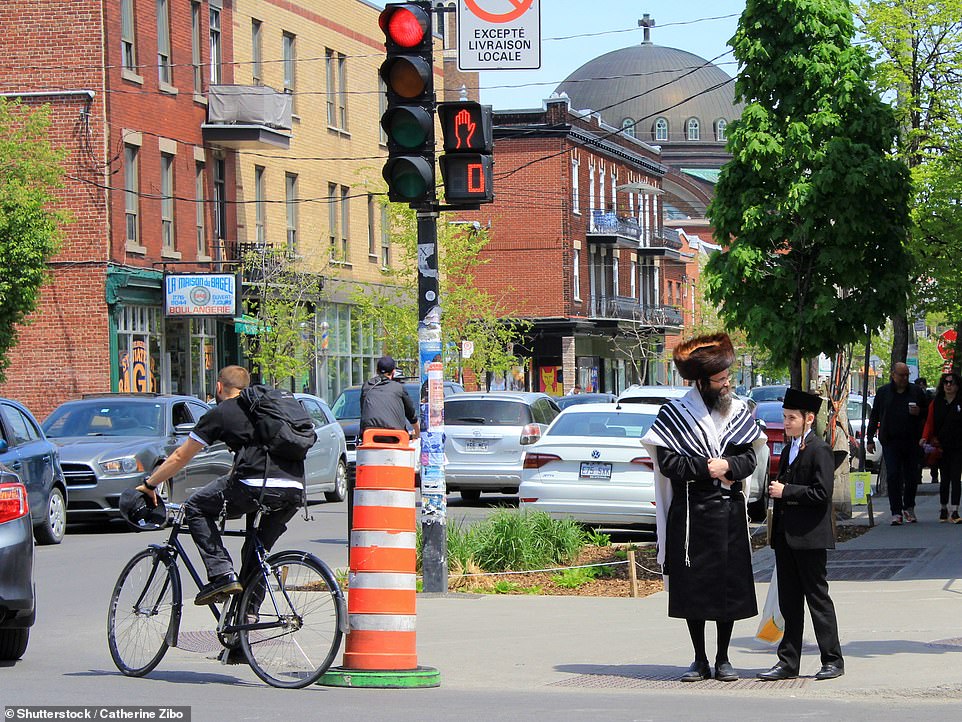 Time Out describes Mile End in Montreal (above), which ranks fifth, as ‘one heck of a neighbourhood’

‘Mile End is an enclave for some of Montreal’s best restaurants, independent bookstores, flower shops, butchers, bakers and candlestick makers,’ says Time Out, adding that it’s ‘a walkable nook that’s home to rival bagel shops, a tea room that transforms into a Champagne salon after dark, a skate park that transforms for “digital block parties” (complete with dazzling projection art) and a watering hole that’s transitioned to crudo [raw fish or beef], croques monsieurs and caviar service.’

It continues: ‘Add a couple of the best brunches in town and a heavy pour of expertly crafted cocktails, and you’ve got one heck of a neighbourhood.’

Cocktails at Le Sparrow and a casual bite at Lucki Delite are vital inclusions for a ‘perfect day’ there, says Time Out. 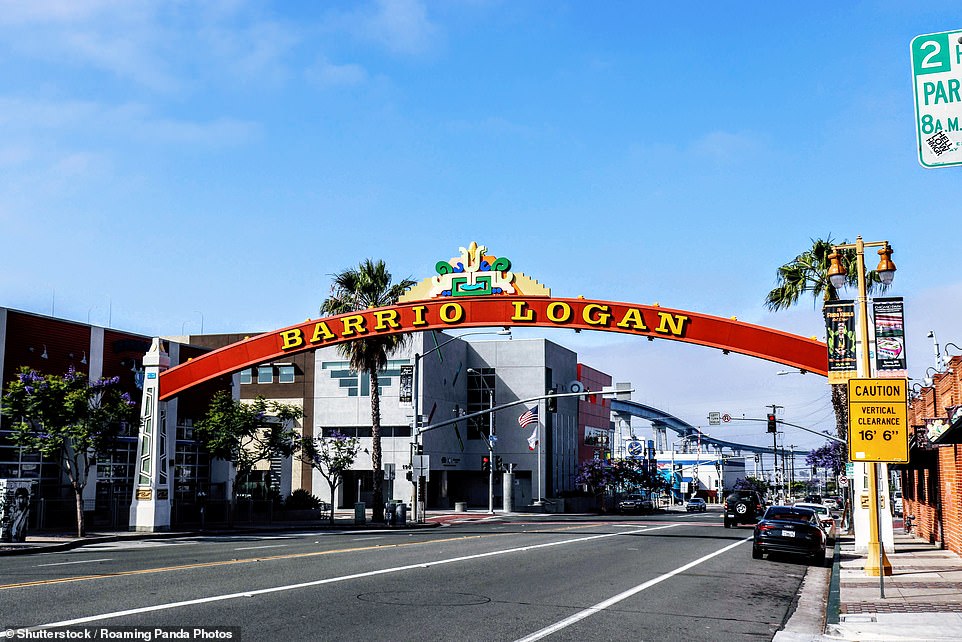 ‘Located just 16 miles north of the border, the tight-knit San Diego community of Barrio Logan is a vibrant and historic hub of Mexican-American culture,’ says Time Out.

‘Along the main thoroughfare, Logan Avenue, lowriders in Chevys, Cadillacs and Buicks (with flamboyant paint jobs and gravity-defying hydraulics) line up to blast Earth, Wind & Fire from souped-up stereo systems.

‘Sustenance comes by way of small family-owned businesses who have been serving the community plates of taquitos for decades – gracias, Las Cuatro Milpas.’

The guide adds that the neighbourhood is ‘home to the largest concentration of Chicano [Mexican-American] murals in the world, with more than 80 world-class paintings depicting scenes from the Mexican Revolution, ferocious Aztec warriors, and larger-than-life portraits of heroes like Frida, Diego and Cesar’. 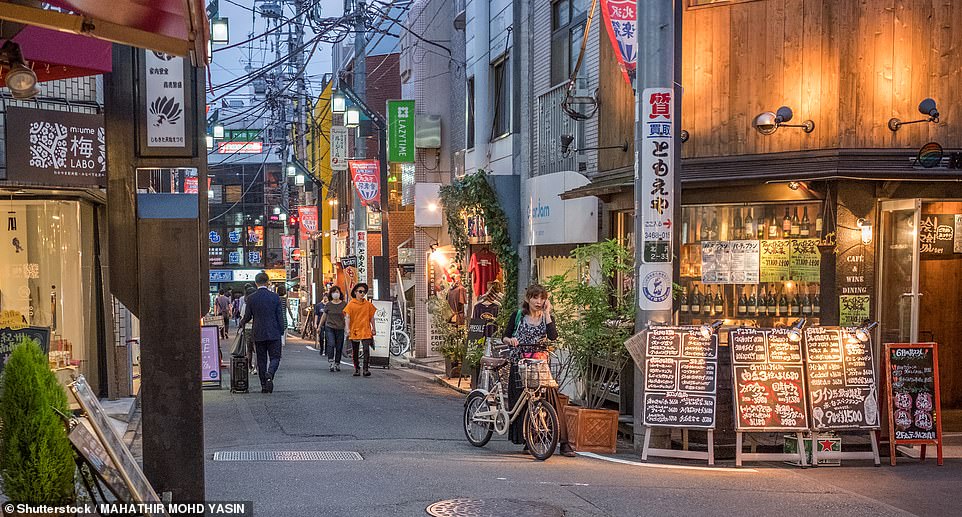 Shimokitazawa, in at No.7, ‘has evolved into a hotspot for indie film enthusiasts, cafe-goers and serious foodies’, says Time Out

‘Just one stop from Shibuya on the express train, Shimokitazawa – or Shimokita, as the locals call it – has reclaimed its title as Tokyo’s coolest neighbourhood,’ says Time Out.

‘Having gone through a massive revamp since 2019 (when it last featured on this ranking), Shimokita will be almost unrecognisable to those who haven’t visited in a few years.

‘Previously known for its vintage stores, Shimokita has evolved into a hotspot for indie film enthusiasts, cafe-goers and serious foodies. This hip hub has also seen countless new shopping and dining facilities pop up.’ 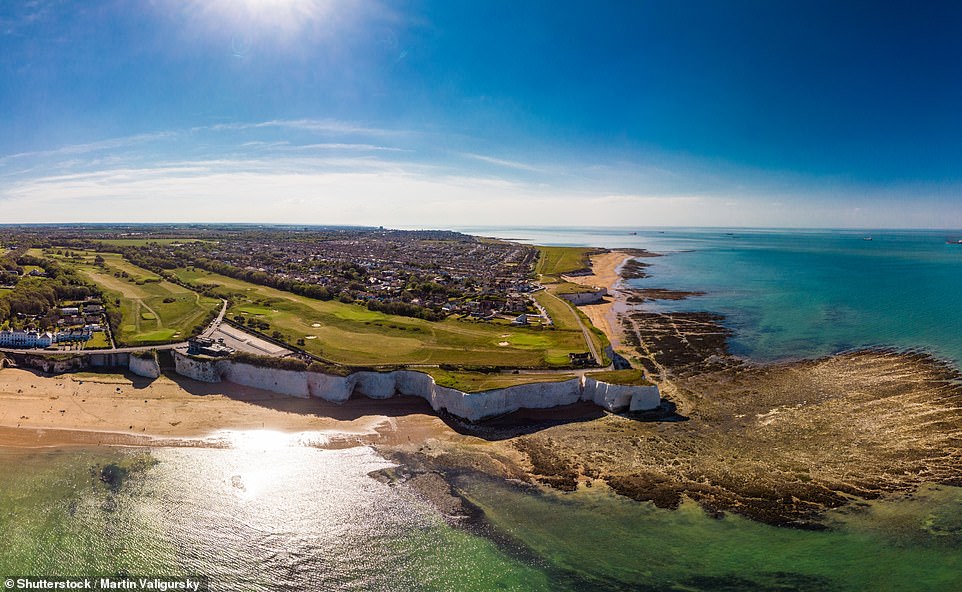 The coolest neighbourhood in Britain is Cliftonville in Margate (above), according to Time Out. This ‘thriving’ area comes eighth in the global ranking

Visit Margate’s Old Town for a ‘good old-fashioned British seaside day out’, says Time Out, but go to Cliftonville for ‘a different kind of energy’.

The guide continues: ‘It’s home to one of the UK’s most thriving artistic communities, largely due to an influx of creative ex-Londoners who’ve flocked to the area’s affordable housing and studio spaces, plus a massive tidal ocean pool at Walpole Bay.

‘The neighbourhood’s spine is Northdown Road, which is a block back from the coast and stretches from the Old Town to Palm Bay.

‘Until recently a parade of charity shops and bookies, Northdown is now home to record shops, cafes and conscious groceries, as well as game-changing community-funded venues such as queer bar Camp and gallery Quench.’ 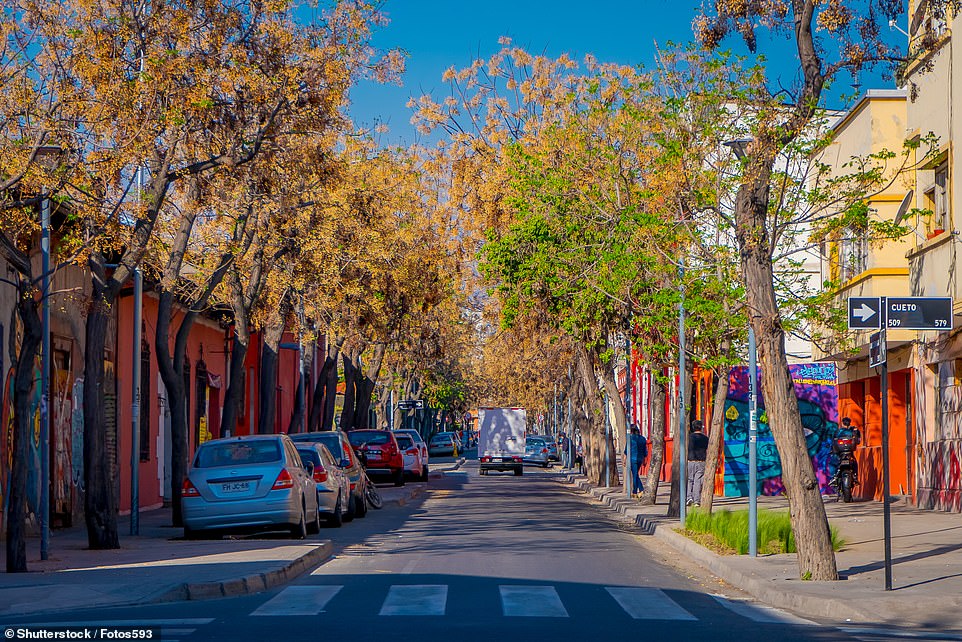 Above is the ninth-coolest neighbourhood – Barrio Yungay in Santiago. Here ‘working-class locals stroll alongside bohemian creative types on attractive boulevards’

‘The colourful Barrio Yungay, located a short walk from heaving Avenida Alameda and Barrio Brasil, is on the up,’ declares Time Out.

‘Boasting national heritage status as the Chilean capital’s first planned barrio [a Spanish-speaking quarter], it’s had an edgy reputation in recent years. But Yungay has now become a magnet for the young and cool: even Chile’s millennial president, Gabriel Boric, chose to move here in March 2022.

‘Illustrious new residents aside, working-class locals stroll alongside bohemian creative types on attractive boulevards such as Lavaud, lined with a diverse array of baroque, Bauhaus and Art Deco facades.’ 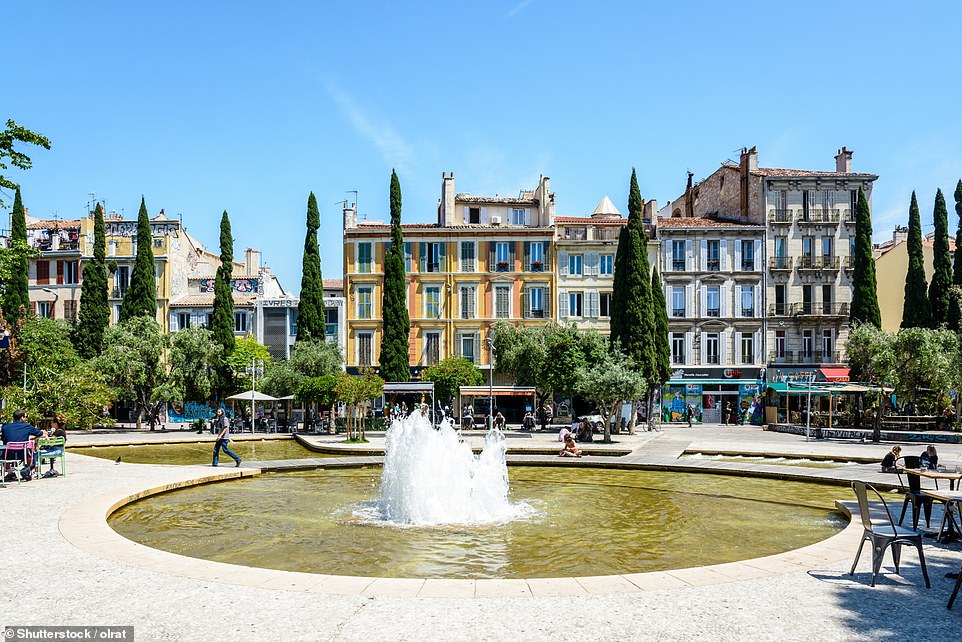 Cours Julien is a ‘gritty, buzzing quarter’ that lies east of Marseille’s swanky marina and is known to locals as ‘Cours Ju’ (a play on the word ‘court-jus’, meaning ‘short-circuit’), Time Out explains.

‘And that’s not the only place you’ll find paintings: seek out the best of the graffiti-tattooed district’s street art on a guided tour of its cobbled alleys.’

For more on the coolest neighbourhood ranking visit www.timeout.com/travel/coolest-neighbourhoods-in-the-world.

THE COOLEST NEIGHBOURHOODS IN THE WORLD 2022, FROM MEXICO TO MELBOURNE VIA MARGATE

Previous article
Virgin Orbit space plane to arrive in Cornwall this week ahead of maiden UK launch
Next article
Pub review: Inside the 17th-century Horse & Farrier, a paradise for walkers in the Lake District