Elegant in emerald! Princess Beatrice cuts a stylish figure at the Variety Club Showbusiness Awards as she presents Katherine Jenkins with the Duke of Edinburgh Gold Heart Award

By Abi Turner For Mailonline

Princess Beatrice looked dazzling in an emerald green dress as she attended The Variety Club Awards this evening. 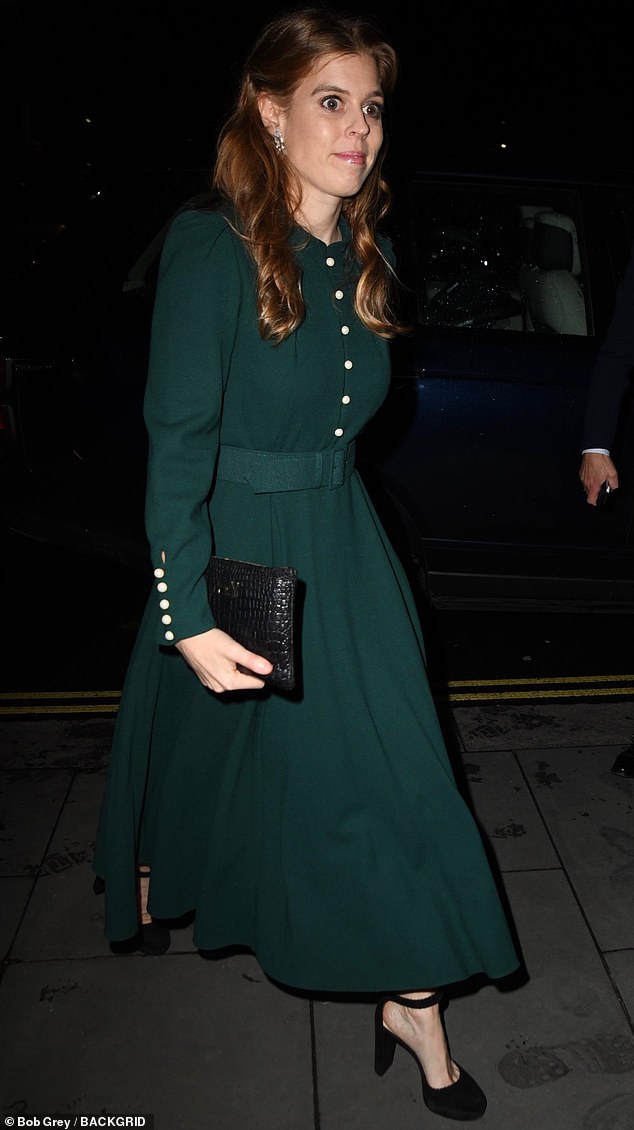 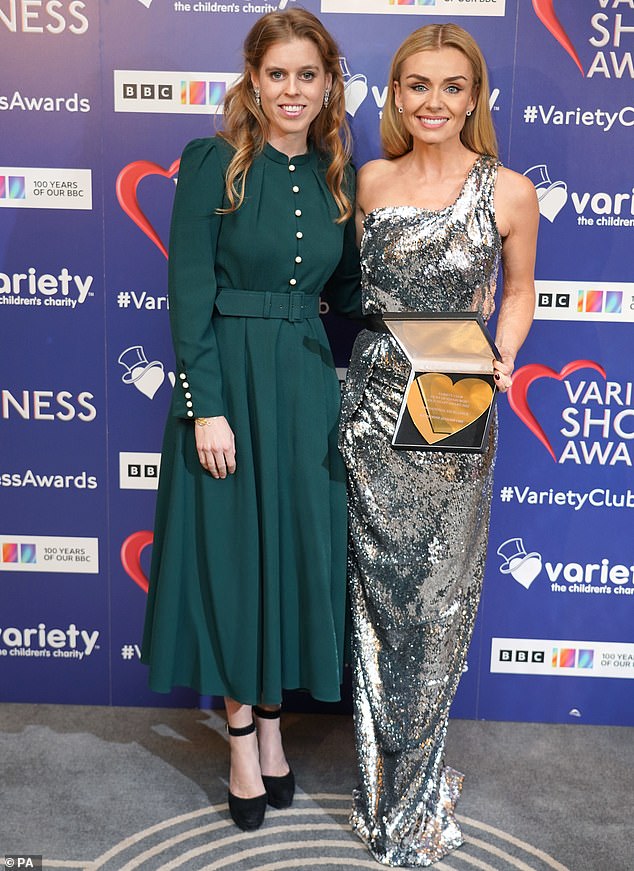 The daughter of Prince Andrew and Sarah Ferguson accessorised her elegant outfit with platform black sandals and a clutch bag.

She tucked her auburn tresses behind her ears in loose curls, showing off a stunning pair of diamond earrings.

Coinciding with the BBC’s 100th year, Variety is celebrating the broadcaster’s place within UK culture, as well as its long association with the charity. 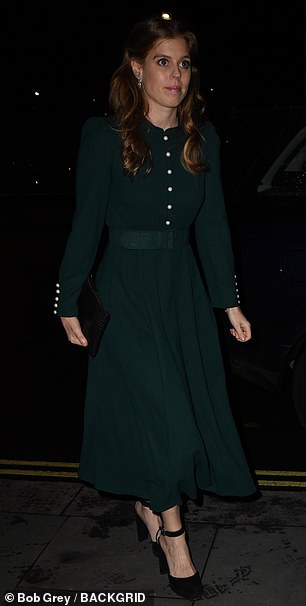 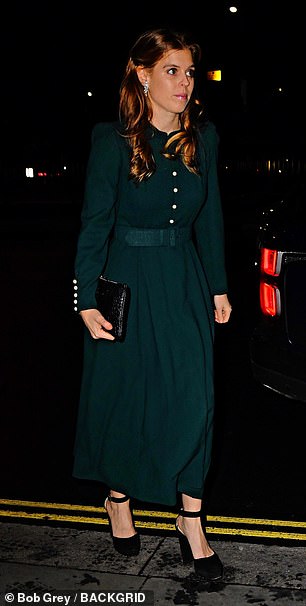 The mother-of-one wore a bottle green shirt dress with full maxi skirt and pearl button detail. The elegant dress was pulled in at the waist with a matching buckle belt 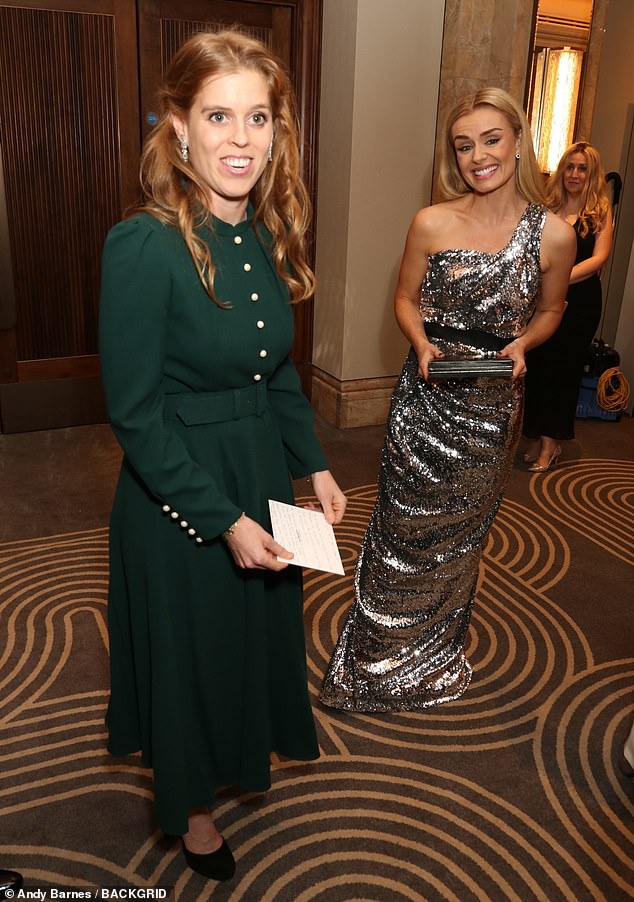 Princess Beatrice and Katherine Jenkins, pictured. The first Variety Silver Heart Showbusiness awards were presented in 1952 and they were first broadcast on BBC television in 1960. 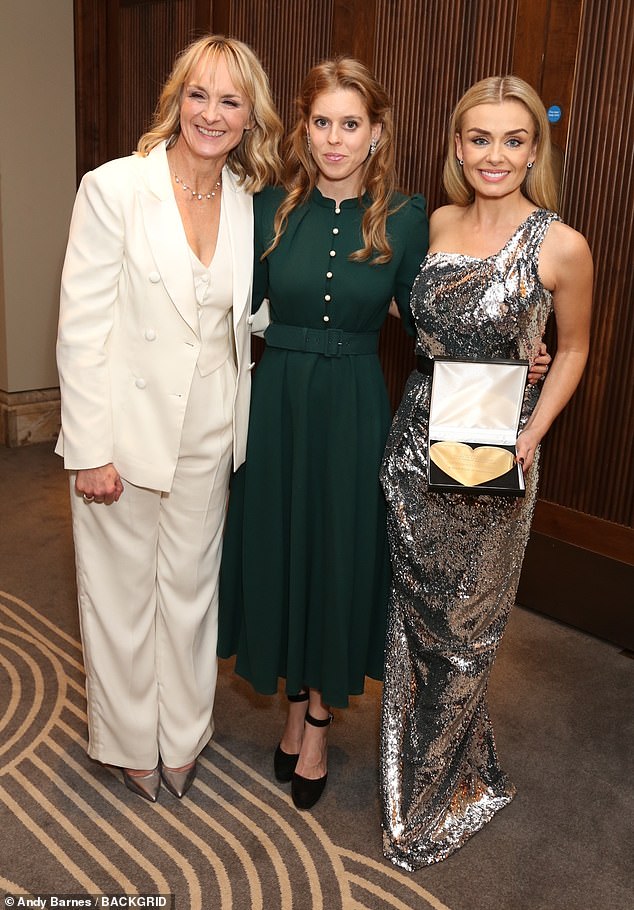 The first Variety Silver Heart Showbusiness awards were presented in 1952 and they were first broadcast on BBC television in 1960.

Tonight’s event was hosted by actress and Britain’s Got Talent judge, Amanda Holden.

It will help support sick, disabled, and disadvantaged children and young people throughout the UK.

Princess Beatrice is no stranger to charitable events, and last week attended a fundraiser for Street Child UK in London. 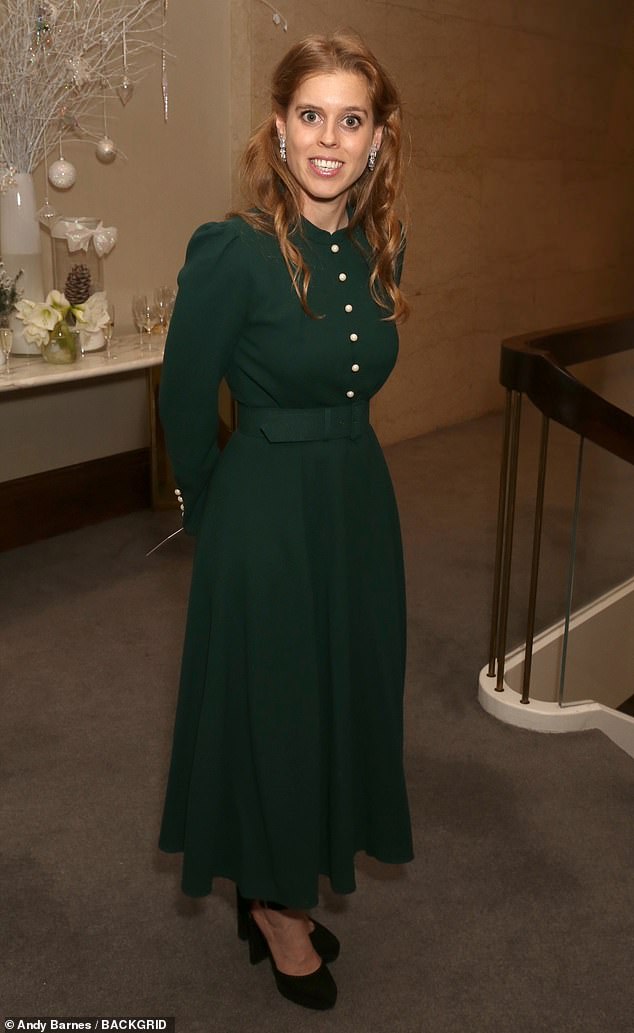 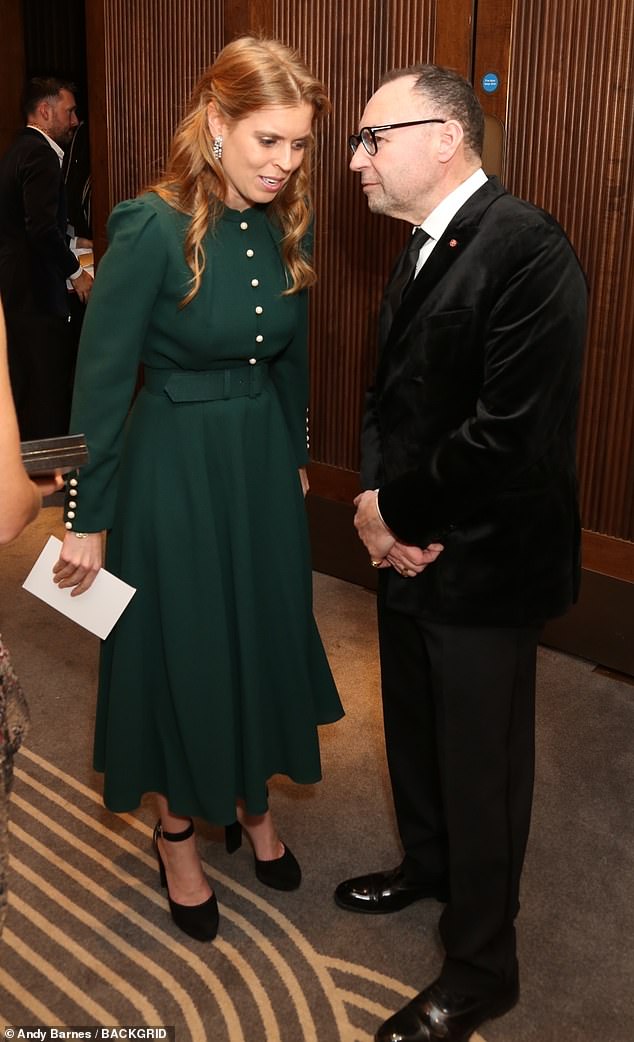 The royal tucked her auburn tresses behind her ears in loose curls, showing off a stunning pair of diamond earrings

Beatrice opted for a Self Portrait blazer dress she had previously worn to attend a vigil in memory of her late grandmother Queen Elizabeth II.

The £420 Self-Portrait dress was also worn by the Princess of Wales the week before as she attended the Festival of Remembrance at the Royal Albert Hall and has been spotted on Zara Tindall and Lady Louise Windsor.

The fundraiser, which brings in hundreds of thousands of pounds for the charity every year, heard from 13-year-old Marsha, who is from the de-occupied territory of Kyiv Oblast in Ukraine and was forced to flee to Germany earlier this year after Russia’s invasion.

Princess Beatrice became an ambassador of Street Child UK in 2018 when the charity merged with Children in Crisis, an organisation founded by Beatrice’s mother Fergie.

Before this, the princess was an ambassador of Children in Crisis and she spent three years working for the organisation after graduating from University.

Katherine Jenkins has been given the first – and only – charity award approved by Queen Elizabeth II just before she died in memory of Her Majesty’s late husband Prince Philip.

Following Prince Philip’s death in 2021, Variety, the Children’s Charity, decided to make a special one-off Gold Heart award as a tribute to the royal, who had supported the organisation for more than 70 years.

‘Charity chairman Professor Jonathan Shalit wrote to the Queen on August 1 – and received a reply on August 31 saying Her Majesty was pleased the award was to be given in her husband’s memory. She died eight days later,’ wrote the Daily Mail’s Alison Boshoff.

Variety aims to change the lives of disabled and disadvantaged children in the UK. Professor Shalit said: ‘We are delighted and proud to be able to present this award.’