An expert has sought to reassure the public...
Women

A woman was left stunned when she took...
News

After playing the forthright sister of Colin Farrell's...
Finance

A woman has sparked debate online after complaining about her mother-in-law constantly ordering food for her since she announced her pregnancy.

Posting on Mumsnet, the anonymous mother-to-be, from the UK, explained how she has tried to reject the bags of shopping in the past.

However, the mother-in-law would simply sneak them into the back seat of her partner’s car instead.

The woman explained: ‘MIL [Mother-in-Law] has always bought [my husband] and his brother food since they both moved out. 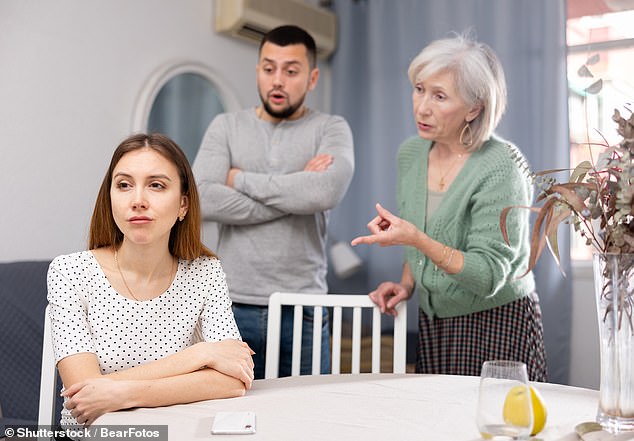 ‘My brother-in-law stopped my mother-in-law years ago (apart from when she offers him steak/high end meat) but my husband still accepts the occasional bag when she’s insistent.

‘[My husband] does try to reject these bags but sometimes she’ll sneak them into his back seat.’

Over the years, the couple have joked that his mother is playing a game of Ready Steady Cook due to the weird and wonderful items she gives them.

She explained: ‘Usually it’s a bag of biscuits/cakes/bread/microwavable rice/crisps with the occasional newly released burgers/seasoned meat.’ 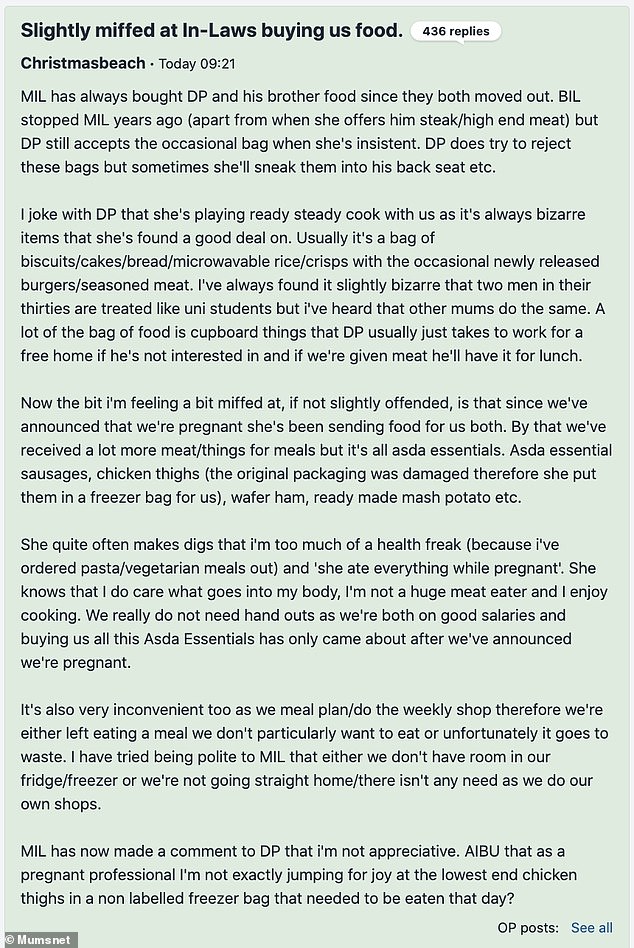 However, her mother-in-law’s behaviour has started to get on her nerves since the woman announced her pregnancy.

She continued: ‘Now the bit I’m feeling a bit miffed at, if not slightly offended, is that since we’ve announced that we’re pregnant she’s been sending food for us both.’

Hinting that she wants her to start eating more protein, the mother-in-law has been sending bags of items from Asda’s  Essential range – including sausages, chicken thighs, wafer ham and mashed potato.

The woman added: ‘She quite often makes digs that I’m too much of a health freak (because I’ve ordered pasta/vegetarian meals out) and “she ate everything while pregnant”. 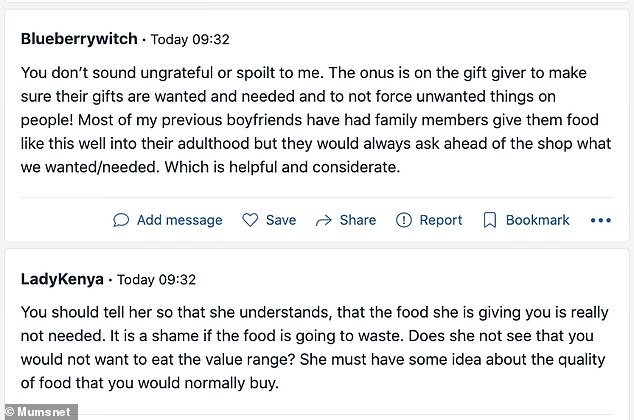 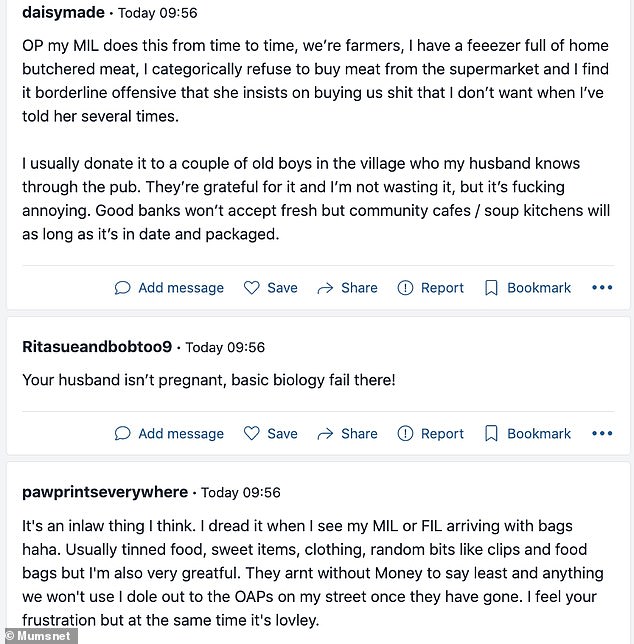 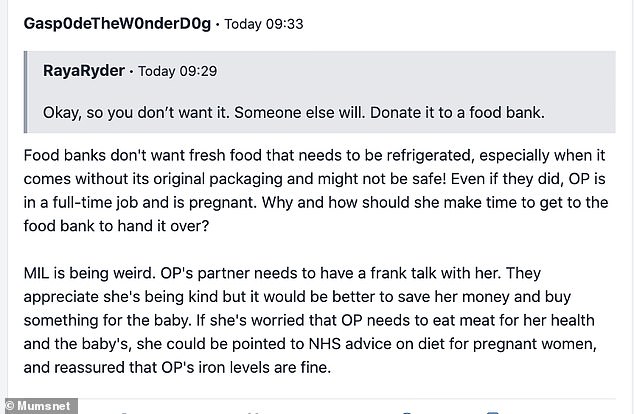 ‘She knows that I do care what goes into my body, I’m not a huge meat eater and I enjoy cooking.’

As such, the mother-to-be says she does not need to rely on ‘handouts’ as her and her husband are on ‘good salaries’.

She wrote: ‘Buying us all this Asda Essentials has only came about after we’ve announced we’re pregnant.

‘It’s also very inconvenient too as we meal plan/do the weekly shop therefore we’re either left eating a meal we don’t particularly want to eat or unfortunately it goes to waste.

‘I have tried being polite to MIL that either we don’t have room in our fridge/freezer or we’re not going straight home/there isn’t any need as we do our own shops.’

However, this didn’t go down well with the mother-in-law – who said the mother-to-be ‘didn’t appreciate’ her efforts.

Posing the dilemma to other members of the forum, the woman concluded: ‘Am I being unreasonable that as a pregnant professional, I’m not exactly jumping for joy at the lowest end chicken thighs in a non labelled freezer bag that needed to be eaten that day?’ 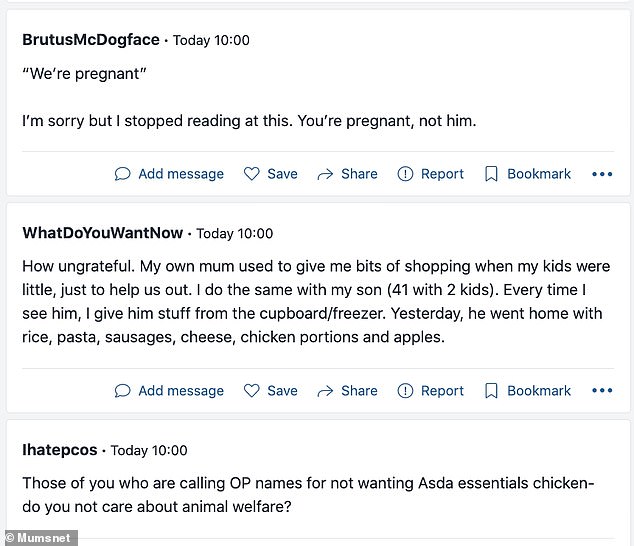 Many agreed with the poster saying the food is going to waste and her mother in law needs to stop.

One person wrote: ‘You should tell her so that she understands, that the food she is giving you is really not needed. It is a shame if the food is going to waste.

Another said: ‘Food banks don’t want fresh food that needs to be refrigerated, especially when it comes without its original packaging and might not be safe! Even if they did, OP is in a full-time job and is pregnant. Why and how should she make time to get to the food bank to hand it over?

‘MIL is being weird. OP’s partner needs to have a frank talk with her. They appreciate she’s being kind but it would be better to save her money and buy something for the baby.

‘If she’s worried that OP needs to eat meat for her health and the baby’s, she could be pointed to NHS advice on diet for pregnant women, and reassured that OP’s iron levels are fine.’

While someone else said: ‘Tell her to stop – you’re having to bin a lot of the food as you meal plan and have your own tastes in food. It won’t stop otherwise and she’ll be giving you more when you have the baby.

‘If she says you’re unappreciative then agree with her and say it’s because you’re an adult who likes to choose their own food but thanks for thinking of us!’

Meanwhile others thought the original poster was being ‘ungrateful’ and ‘rude’ by not wanting to accept the food.

One person wrote: ‘Talk about making a mountain out a molehill OP. I do also agree that it comes over as spoilt, snobbish and ungrateful.

While another said: ‘How ungrateful. My own mum used to give me bits of shopping when my kids were little, just to help us out.

‘I do the same with my son (41 with 2 kids). Every time I see him, I give him stuff from the cupboard/freezer. Yesterday, he went home with rice, pasta, sausages, cheese, chicken portions and apples.’ 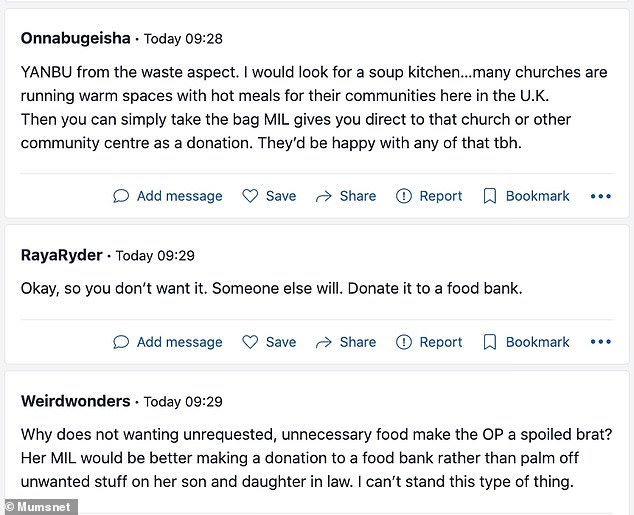 While a third wrote: ‘It sounds like she’s trying to be kind and you’ve been a bit awful about it tbh. Stop fighting with her and just leave it to her and her son. He can decide what to do with the chicken thighs.’

Others suggested the poster should just take the items to a food bank if she doesn’t want them.

One person wrote: ‘Suggest you ensure your DH is onside, he may secretly like it!

‘Then join Olio and give it away there, or to a local food bank. Her love language is not one you appreciate but she’s not going to stop so use it in a way others can benefit.’

Another said: ‘YANBU from the waste aspect. I would look for a soup kitchen…many churches are running warm spaces with hot meals for their communities here in the U.K.

‘Then you can simply take the bag MIL gives you direct to that church or other community centre as a donation. They’d be happy with any of that tbh.’

While someone else wrote: ‘Okay, so you don’t want it. Someone else will. Donate it to a food bank.’

An expert has sought to reassure the public...

A woman was left stunned when she took...

An expert has sought to reassure the public...

A woman was left stunned when she took...