In the first part of their much-anticipated Netflix...
Women

While a six-year-old girl said she wanted: "Something...

An Aussie mum-of-two has shocked parents on Facebook after revealing the massive haul of presents for her two kids.

Larissa bought and wrapped more than 40 gifts for her children, one aged three and another 17 months old.

Sharing an image of the wrapped gifts stacked in a cupboard, Larissa said she’s ‘super excited’ for the festive season this year. 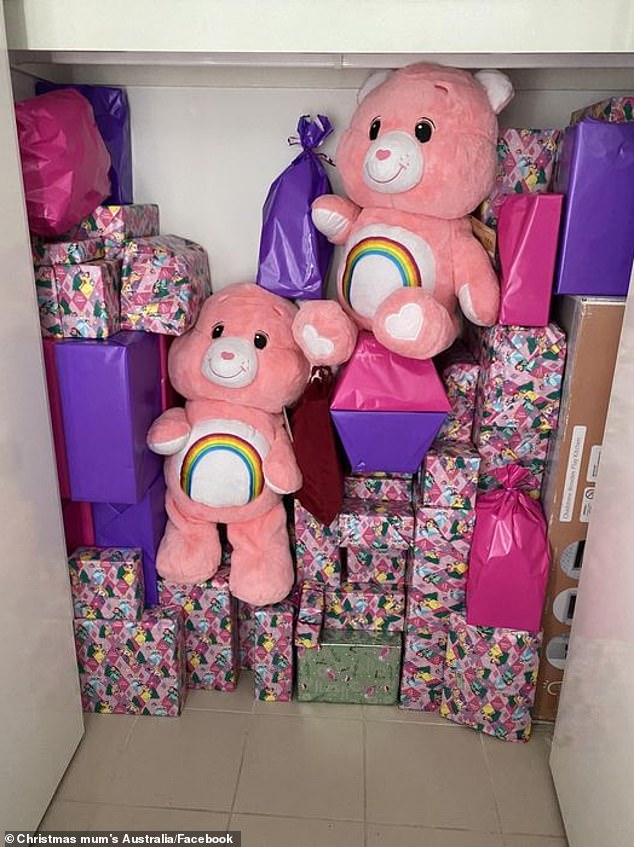 Australian mum Larissa bought and wrapped more than 40 gifts for her children, one aged three and another 17-months-old (pictured: the gifts). Some of the presents included a kitchen play set, bowling set, plush Care Bear toys, Lego,  bubble machine, Nintendo Switch and more

Is this too many gifts for two children under three?

‘After clearing out their toy room earlier this year from all the more ‘baby toys’ they were left with books, mega blocks, couple puzzles and soft toys from family,’ Larissa wrote, and so she decided to restock their toys.

The huge haul likely cost thousands of dollars, as the Nintendo Switch and five games alone would’ve cost around $700.

‘This is my third year as a mum for Christmas. First year was books, second year was books and some learning cards/puzzles. I’ve always done something small,’ Larissa wrote in the comments.

She added how some gifts were bought mid-year and hidden from the children.

‘I don’t [lock the cupboard], I’m lucky the only cupboards they open are the ones in the kitchen. All their presents are stashed in their toy room cupboard,’ she said.

Some mums were in disbelief over the amount of gifts bought for the two little children, but others praised Larissa for being a ‘good mum’.

Some wished they had as much space to hide their own Christmas gifts from their family.

‘I think it’s insensitive to brag about your present hiding space!!!’ one person wrote.

‘How do you manage to keep the kids from finding your stash???’ another asked, but Larissa said: ‘I don’t haha. They just don’t open cupboards and they’re all in their toy room cupboard too.’

What did the mum buy?

It followers after a single mum was slammed by parents on social media after stuffing three shopping trolleys with Christmas presents for her four-year-old daughter.

Sharing photos of the buys to a popular Facebook group, Casey, from Queensland, picked up the toys from Big W on Tuesday.

‘Got little miss four’s lay-by out, so excited to put them with the rest of the presents I have already got her,’ Casey wrote.

But she was quickly criticised by some who claimed she’s ‘spoiling’ her daughter far too much. 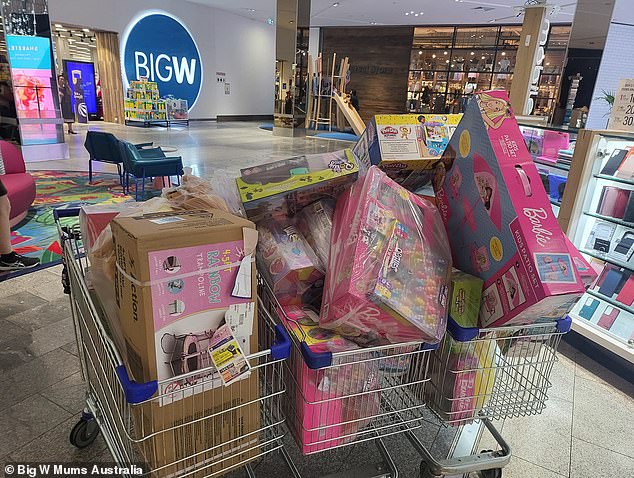 It followers after mum Casey, from Queensland, purchased three trolleys-worth of Christmas presents for her four-year-old daughter (pictured: the trolleys). Between now and Christmas the gifts will be kept out of sight in a spare bathroom that’s locked and unused 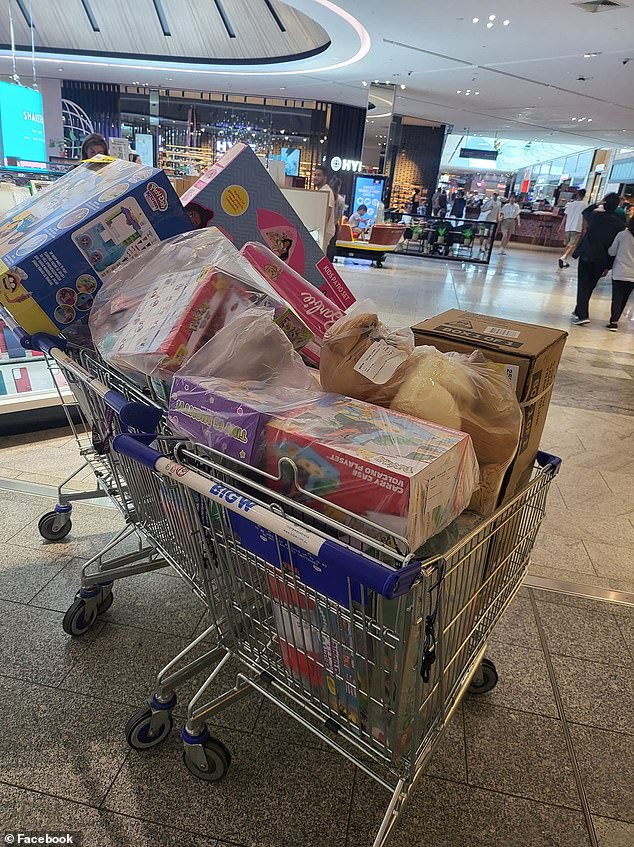 Some of her purchases included a Pokémon plush toy, Action Spots trampoline, Polly Pocket Pajama Party Sleepover Adventure House Playset and a Barbie Patio Set. While she didn’t reveal how everything cost on this occasion, last year Casey spent a whopping $1500

In the comments Casey revealed she doesn’t own a car and ordered an Uber home to transport the huge number of toys from the store.

Between now and Christmas the gifts will be kept out of sight in a spare bathroom that’s locked and unused.

And while she didn’t reveal how everything cost on this occasion, last year Casey spent a whopping $1500.

What did the mum buy from Big W?

Some of the gifts include:

More than 230 people commented on the post, many left to question why so many toys were bought.

‘No child needs this let alone more than this it’s a lil overwhelming for a child life experiences or a holiday or get ahead on some bills a child has all it needs already,’ one woman wrote.

‘If she was my niece or granddaughter she would be getting squat from me if I knew this is what they were getting,’ another said.

A third mum added: ‘As someone who has raised four kids and spent lots of money over the years buying gifts I can tell you it is a regret having done so.

‘None of the kids barely even remember a quarter of the presents they received nor do they care about the toys they got as kids.

‘That money would have been much better off being invested so they could buy their first car or go on their first plane ride etc. especially as a single parent.’

Someone else claimed Casey was ‘bragging’ about what she bought. 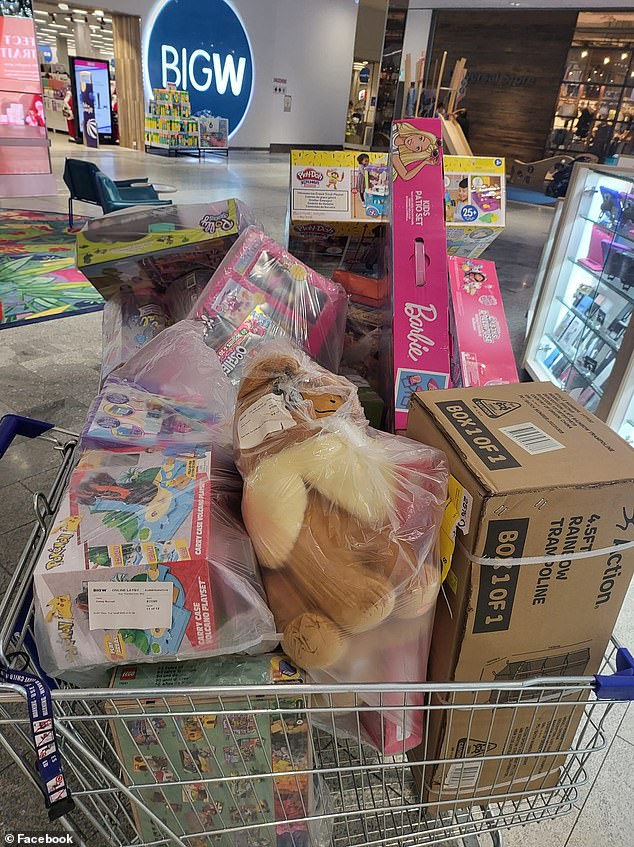 Despite the backlash Casey revealed what she does as her daughter outgrows the toys bought over the years.

‘I was just wondering if you do pay It forwards of older toys from last year? I’m only asking as it would be great to set up a pay it forward for those who are in need this Christmas,’ one person asked.

Casey said she gives the toys away if her daughter doesn’t express any interest in the old toys.

‘I also make her pick some toys out of the store before Christmas and give them to others who have nothing,’ she said.