A mother-in-law has been slammed for wearing a ‘tacky’ black mini dress to her son’s wedding – and unimpressed social media says she looked better suited to attend a ‘sexy funeral’.

Earlier this week, a recent bride – believed to be from the US – posted photos of her big day on social media.

However, it wasn’t long before an anonymous Reddit user then proceeded to share the images from the woman’s big day on its Wedding Shaming forum after spotting her ‘mother-in-law”s unusual choice of attire.

The picture shows a woman – who the user claims is the mother-of-the-groom – standing next to the happy couple in a plunging black mini dress.

Complete with a deep V-neck cut, the dress also has a dramatic overskirt which allowed the wearer to show off her legs. 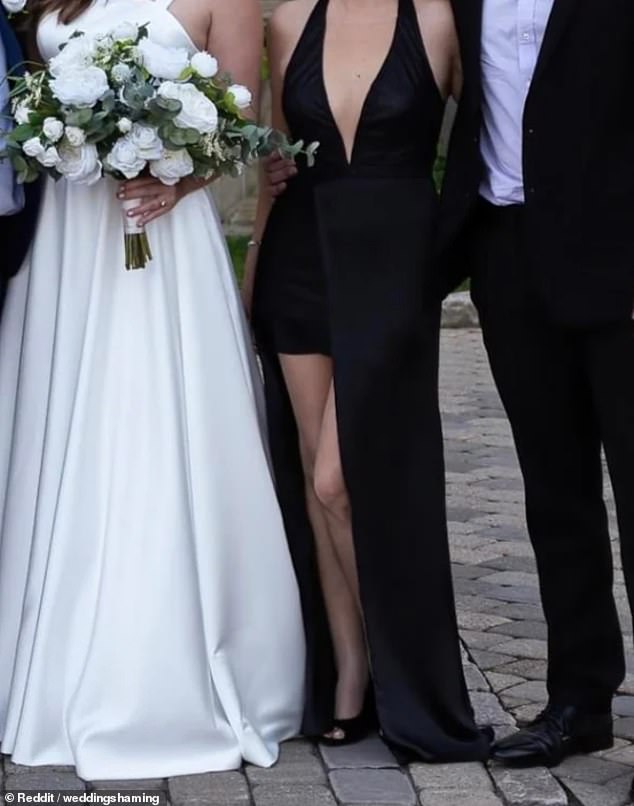 The picture shows a woman – who the user claims is the mother-of-the-groom – standing next to the happy couple in a plunging black mini dress. As well as a deep V-neck cut, the dress had a dramatic overskirt that showed off her legs

Since the image was posted two days ago, the post sparked fierce debate and racked up over 400 comments.

Trying to defend the woman, one person commented: ‘At least it’s not white.’

Not letting the wearer off that easily, another responded: ‘It’s black though, like she’s going to a sexy funeral.’

‘It’s the low low cut, high leg “look at me” style of the dress,’ a third mused. ‘It just feels super cringe.’

In response, a fourth joked: ‘We love a goth Queen!’

Labelling the woman ‘tacky’, a fifth said: ‘She’s screaming for the attention to be on her.’

Trying to take a balanced approach, another argued: ‘In some cultures, [wearing black] is considered rude as it can represent mourning. But it’s considered okay in others.

‘In most cultures though, turning up in a micro skirt in church would be considered inappropriate.’

However, others said they had ‘no problem’ with the dress and wouldn’t be bothered if their relative wore it too

However, others said they’d be perfectly happy if their relations turned up to their wedding in a similar outfit.

Jumping to the woman’s defence, one said: ‘If my mom looked that good, I would be like “you know what? Good for her, she can have this one!”‘

‘I have absolutely no problem with this outfit,’ another added. ‘If my body was great like hers, I would wear it myself. Plus she’s not wearing white.’

Meanwhile, others said wearing black to weddings is no longer seen as a fashion faux pas – with many claiming to have chosen the colour for their bridesmaids dresses.

‘While I believe this dress is beautiful and appropriate for the reception, the churches I have attended usually request modest dress,’ a third replied. ‘The deep cleavage would not be appropriate in church. Totally fine for a party though.’