Liz Jones's Diary: In which I face an uncertain future

Sunday afternoon. I get an email. It’s from him. White Pepper Guy. My heart sank.

You know, the man who last time I saw him meant I was stuck with a £150 dinner bill and told me that my hearing aids are annoying when they whistle. I don’t know how he can still get through, given my IT department* blocked him. There is a little ‘no entry’ sign on his email. Should I open it?

It’s a link to something on YouTube. I open it. It’s a George Harrison tribute concert from 2004. Prince is playing, and I’m reminded of how much I love him. Prince, that is, not White Pepper Guy. So small and mischievous.

I’m tempted to reply, say, ‘Oh, isn’t Dhani Harrison just like his dad?’ But what’s the point in opening a dialogue? 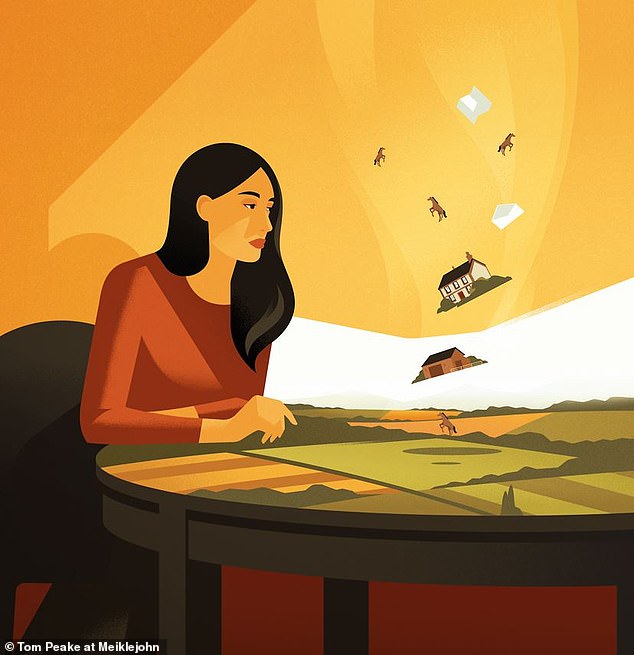 Liz Jones shares her experiences in receiving an email from an old flame, featuring a link to a George Harrison tribute concert from 2004

I’m relieved that he didn’t send a link to the Rock Star, who is a bit high-profile at the moment. White Pepper is obsessed with him. If I texted to say, oh, the RS is on TV (usually The One Show), he’d reply, frantic, ‘Tell me, please, which channel?’

I’m in a period of uncertainty this week (what’s new? I hear you ask as you soak in a bath). I should hear later this week, after ten months of unpredictability, whether or not I’m allowed to offer on the cottage I’m currently renting, given it hasn’t been sold.

As Meryl Streep would say, it’s complicated. I rent the paddocks and stables for the horses from the person next door, and she has first dibs. Unfortunately, my mortgage offer has a) now expired after more than six months, so would have to be sourced all over again with bank statements, accounts, etc. And b) the interest rate, which was four per cent fixed for five years back in the summer, will now be around eight per cent, variable (because I was made bankrupt, rates for me are much higher than, you know, someone who didn’t buy their sister a cottage then never heard from her again).

The film star who offered to lend me money emailed last week to ask how it was all going. ‘FFS!’ she said when I told her. I wonder what it says about me that a movie actress wants to know that I’m all right, but no one in my family bothers to enquire.

You might say, well, just cut your losses from having renovated the cottage and buy elsewhere. But with Nic who works for me off sick for a year, unable to get here until the afternoon, I would never be able to cope with my horses (and her two) if I didn’t live on site. I’m back and forth six times a day, up at dawn, last check at 11pm.

While I work at my day job, I keep an eye on them from my office window. And it’s just as well. On Saturday, as I was picking up acorns – again – a strange man climbed over the locked gate and walked towards me. I grabbed four collies.

‘Is this the way to Richmond?’ he said.

‘No, it’s over the bridge. This is private land.’

‘I’m a human being,’ he said, continuing past me.

‘You are going the wrong way. I told you.’

‘You didn’t tell me, you told my twin. If your dogs come anywhere near me, I will kill them.’

He was hanging around later in the churchyard. Nic called the police, but they never turned up.

Yesterday I was sitting writing a piece about a book called Women Who Love Too Much (that’s me, apparently: we choose unreliable losers and try to change them with our bossy superiority), when Gracie started to gag. She then collapsed on her side, eyes flickering, bladder emptying in an undignified pool.

She has not been herself. Every evening, she goes to the top of the stairs to stand and bark. She will only come down for a biscuit, then she promptly returns to the top again. I don’t know whether she’s training me, or just confused.

Previous article
Sharpen your elbows, says Liz Hoggard, and get ready to barter at the place to be – a car-boot sale
Next article
Stocking thrillers: Fill them with these special little somethings, all for £10 or under