The Met Office has issued a yellow weather...
Women

Labour's Samantha Dixon has increased her majority in...

Being a film and TV star and model is all glamour, right? Well, not if your children have anything to do with it. So discovered Laura Haddock ‒ who’s appeared in everything from Transformers and Guardians of the Galaxy blockbusters to the latest Downton Abbey movie ‒ when her daughter Margot, four, recently walked in on her having a home haircut.

‘God, it was awful!’ Haddock, 37, exclaims, rolling her eyes at the memory. ‘A friend had come over to give me a trim and had divided my hair into three sections at the back. Margot picked up the hairdressing scissors and, while I was chatting to my pal, she snipped the middle section off completely. Margot said, ‘Can we glue it back on?’ I tried to stay calm because she was obviously in shock but then she said, ‘Can I have a snack?’ I was like…’ Haddock’s voice goes up an octave. ‘No, you cannot have a snack!’

There have been plenty of moments like these in the past three years with Haddock bringing up Margot and her brother Pip, six, as a single mother, following the split from their father, her husband of six years, Sam Claflin, who starred in The Hunger Games. Haddock won’t talk about the divorce or about her current partner. It’s clear that she and Claflin are on good terms, judging by his Instagram post on Mother’s Day last year when he wrote, ‘A happy Mummy’s day to the mother of my two radicals,’ across a photograph of Haddock and the children. ‘They’re so lucky to have you. Mother. Friend. Teacher. Warrior. Superhero. Inspiration. We got this @laurajhaddock.’

That said, Haddock is frank about the challenges of combining her acting career, which involves large amounts of time away, with family life in her Buckinghamshire home. ‘Naively, becoming a mother, I thought, “Oh, yeah, you can do it all, you just need a great team around you,”‘ she says, rolling her eyes. ‘But it’s really difficult.’ 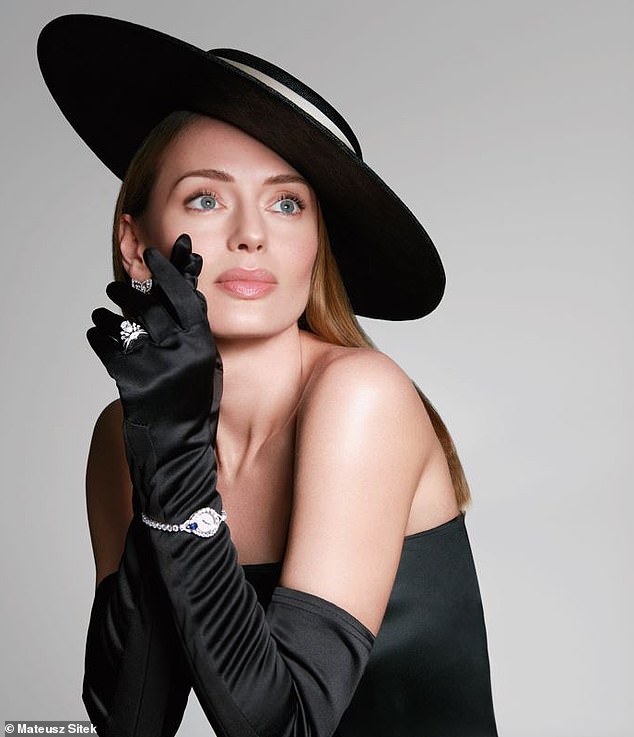 Dress, Armani. Hat, EmilyLondon. Gloves, Miscreants. Jewellery, Chaumet. Haddock is frank about the challenges of combining her acting career, which involves large amounts of time away

Haddock is upfront with potential employers about needing time with her children. ‘I ask to make my schedules work around the kids,’ she says. ‘I make clear what my boundaries are – and they’re not vast, they’re not ridiculous – but it’s tricky and scary going into those conversations. You worry there will be some studios and producers who won’t fly with it, who are going to book the woman without children. I have to have faith. For so long women tried to juggle it all in private – it’s unhealthy to live that way. You feel very isolated. There has to be a space for us to say, ‘We are bringing in exactly the same money as the father but we also have pregnancies and we are at home looking after the children’ ‒ of course, men are often doing that last bit too, but it is something else women have to consider.’

Earlier this year Haddock filmed her latest role, for Netflix’s upcoming spy series The Recruit, in Montreal in temperatures of -10C. ‘I was filming a scene in an airfield wearing jeans and heels – I got frostbite in my foot; my face was bright red; my eyes were streaming,’ she says. It was the Easter holidays so Pip and Margot were with her: ‘The snow was magical for them!’ But, with Pip settled in school in England, Haddock has had to turn down many other plum roles. ‘There have been tough decisions about opportunities that would have been very exciting for me before having children, but if they involve shooting for several months in New Mexico, that’s a real battle. Children rely on you for a routine, a plan; so I have to follow my gut, my heart and my instinct.’ 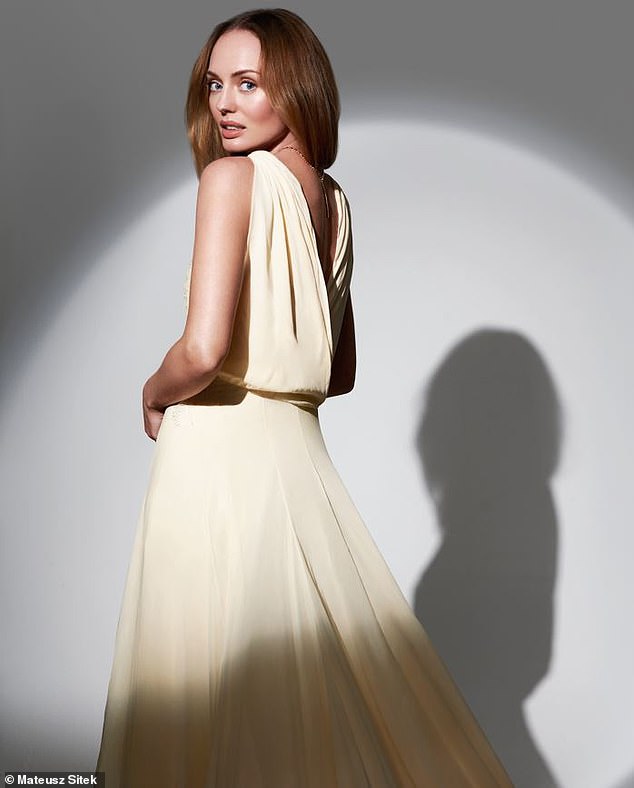 Dress, Lanvin. Necklace, Chaumet. Haddock was 30 when Pip was born. ‘But we’d been trying for a while because I had a few miscarriages,’ she says softly

Haddock always yearned for babies. ‘It was what I wanted from a very young age,’ she says. ‘I’m very maternal, so it’s been incredibly satisfying; there was a real biological pull. But to other women, I say, ‘It’s OK if you don’t feel that pull.’ Laughing, she adds: ‘And remember, being pregnant is just one per cent of what you’re entering into.’

Haddock was 30 when Pip was born. ‘But we’d been trying for a while because I had a few miscarriages,’ she says softly. ‘I don’t know if I’d been through anything as traumatic up until that point. They all happened at different times [in the pregnancy]: one was at 13 weeks, so you’ve gone through sickness, exhaustion, scans; you’ve dreamed of [your baby] and planned. It’s really difficult.’ Her whole family grieved with her. ‘They knew as soon as I tested positive, so this was loss on quite a big scale; a lot of people are invested in a pregnancy.’

She continues: ‘That was the first time I understood life wasn’t relentlessly joyful. It was incredibly painful, but important for me to go through. It was a sad time but it made me more sure I wanted to be a mum.’ She shakes her head, startled she’s said so much. ‘I’m not the only person to have experienced it. There’s a relief in saying something and it not feeling loaded ‒ and this didn’t.’

Haddock’s glad the subject is becoming less taboo, with the likes of Michelle Obama, Chrissy Teigen and Meghan, Duchess of Sussex, speaking out about their losses. ‘I hadn’t had conversations about miscarriage before I had mine; it didn’t seem a real possibility until it happened. I protected myself moving through the pregnancies, taking each day as it came, not getting too excited.’ Only when her four-month scan with Pip had passed did she allow herself to celebrate. ‘I was on a job being corseted, and I said to the costume designer, ‘Can you not do it too tight?’ She had a twinkle in her eye and said, ‘Oh? Me too!’ We started bouncing around together.’

She nicknamed her growing baby Pip after learning that was his size at an early scan. ‘When he was born we gave him a different name, it didn’t suit him,’ she laughs. ‘All our friends were texting us: ‘Has Pip arrived? How much does Pip weigh?’ So a few days later we said, ‘Shall we just give up? He’s Pip, isn’t he?’

Sitting in a side room at the YOU photo shoot, Haddock radiates star quality despite wearing no make-up, a sweatshirt and joggers. Her beauty’s so striking it’s hardly surprising she has a flourishing sideline as a fashionista, attending the designer shows and acting as an ambassador to brands. 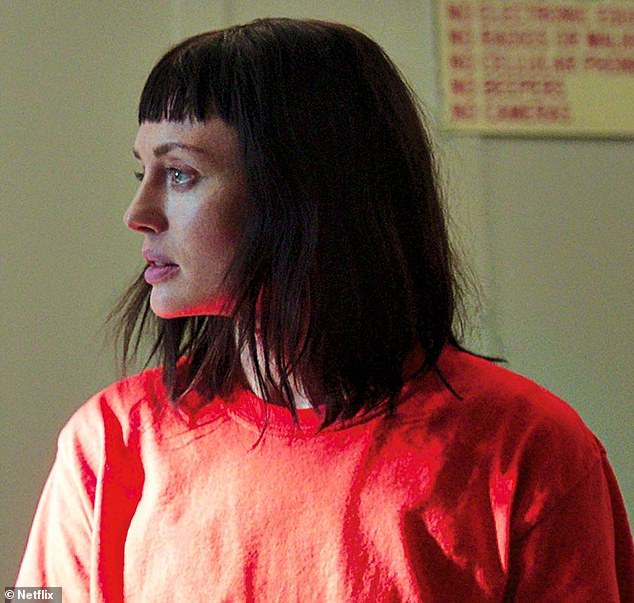 Earlier this year Haddock filmed her latest role, for Netflix’s upcoming spy series The Recruit, in Montreal in temperatures of -10C. Laura in her role as Max in The Recruit 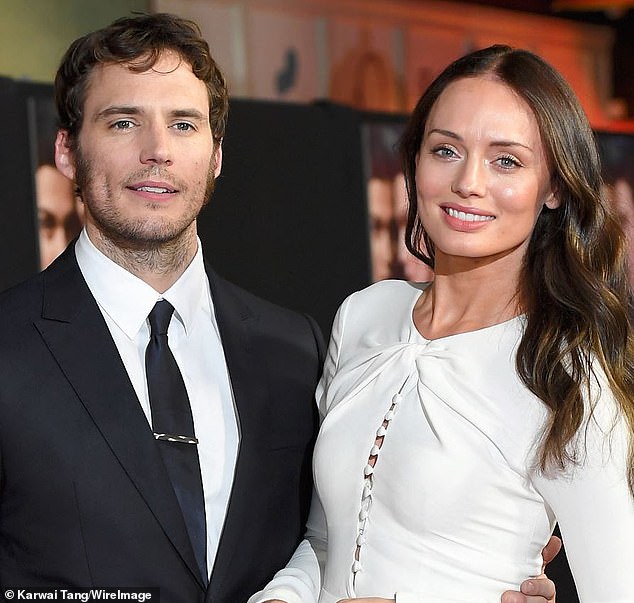 The star with ex-husband Sam Claflin in 2017. It’s clear that she and Claflin are on good terms, judging by his Instagram post on Mother’s Day last year

Haddock had a solid Home Counties upbringing in Harpenden, Hertfordshire, where she attended the local comprehensive. Her father works in finance and her mother is a reflexologist. She has a younger sister Beth, a photographer – ‘she’s very smart and funny’ – and a younger brother Jack, who works in recruitment and whose Instagram profile bills him as a ‘deaf rugby athlete’ with England caps to his name.

‘He has partial hearing,’ Haddock says. ‘He’s had it since he was born and it’s degenerative. But he’s amazing; he attacks life with so much joy. He makes me howl with laughter and is such a positive energy.’

For sixth form Haddock attended the ArtsEd performing arts school in West London, with a dream of ‘going about the UK doing plays’. Instead, early in her career she was cast in the 2011 film The Inbetweeners Movie, based on the popular Channel 4 comedy series, which – despite its small budget – made the most money of any British comedy film in its opening weekend.

Preparing for this interview, I re-watched its infamous dance scene where the geeky boys try to impress Haddock’s character Alison ‒ the ‘cool girl’ (‘I loved playing that because in school I was so uncool’) ‒ by busting moves to ‘We No Speak Americano’ by Yolanda Be Cool and Dcup, and was doubled-up with laughter. ‘I don’t know how we got through that, we had to cut it together because in every take there was somebody wetting themselves with laughter,’ she recalls. ‘People still sing that song to me and do the moves on the street.’

She went on to find roles in big-budget Hollywood franchises, as well as TV staples such as the detective drama Luther, only to scale back when children came. Now, she’s starting to spread her acting wings again with The Recruit. She plays Max, a Russian former informer to the CIA, threatening to reveal her role in top-secret US government shenanigans unless exonerated of a terrible crime. Max is sexy, ice-cold and extremely damaged and ‒ portraying her with no make-up and an unflattering blunt fringe – clearly Haddock enjoyed breaking away from previous more glamorous roles.

‘I was craving a part like that,’ she says. ‘Initially, it was about proving to the industry I was capable of doing something different to anything I’d done before. Then I realised it was more about proving to myself that I could really do this. Sometimes, you can lose your confidence and forget why you love acting, but this has reignited my passion.’

The Recruit will screen on Netflix from 16 December. Laura is an ambassador for French jeweller Maison Chaumet

The Met Office has issued a yellow weather...

The Met Office has issued a yellow weather...