Apple accused of censoring Quran app at request of Chinese government
All-5G iPhone 14 rumored to have 'complete redesign' that will lose notch, add MagSafe main charger
Boy, 13, is killed as he plays on iPad in his bedroom after shooter outside fires over a dozen shots

By Erica Tempesta For Dailymail.com


Jenna Bush Hager has recounted how her twin Barbara Bush pierced her ear with a safety pin and an apple behind their parents’ backs, saying her daring sister also tried to pierce her own belly button.

The former first daughter, 39, opened up about her five ear piercings on Monday’s episode of the Today show, saying she has three on one side and two on the other. However, she admitted her parents — George W. and Laura Bush — never gave her her permission for a few of them.

‘My sister pierced one of these with a safety pin and an apple when my parents weren’t watching,’ Jenna told her fourth-hour co-host Hoda Kotb. ‘She iced it to numb it and then [had] an apple behind it and was like [yanking it through].’ 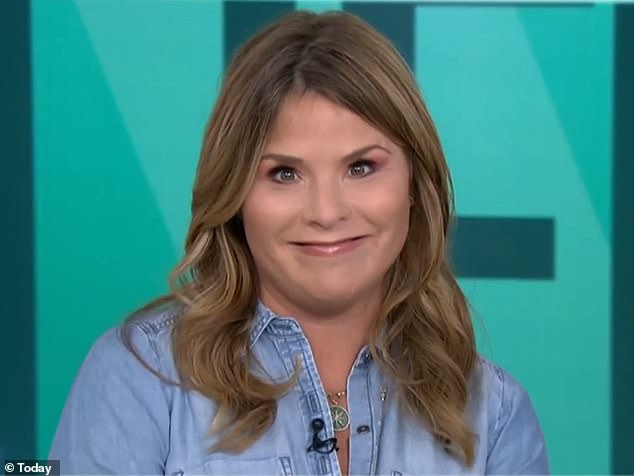 Rebels: Jenna Bush Hager, 39, revealed her twin sister Barbara pierced her right ear behind their parents’ backs when they were younger 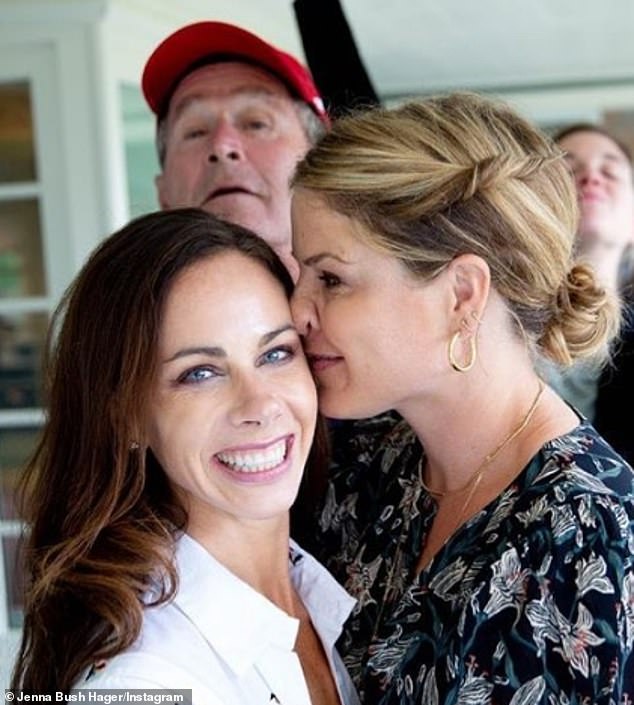 Bling ring: Jenna (pictured with Barbara) has a total of five ear piercings, three on her left ear and two on the right

And that wasn’t the only questionable piercing she got in her youth.

The mother of three explained that she was at sleep away camp when she got her left ear pierced, saying: ‘I got one pierced at Camp Longhorn, which I think was illegal.’

While Jenna has her fair share of piercings, it seems that her twin sister was the one who was really into the look at the time.

‘Once she tried to pierce her own belly button,’ the Today star said. ‘Sorry, Barbara. She was just stabbing [at it]. I remember she was listening to a Led Zeppelin album and my dad was like, “What are you doing?”‘ 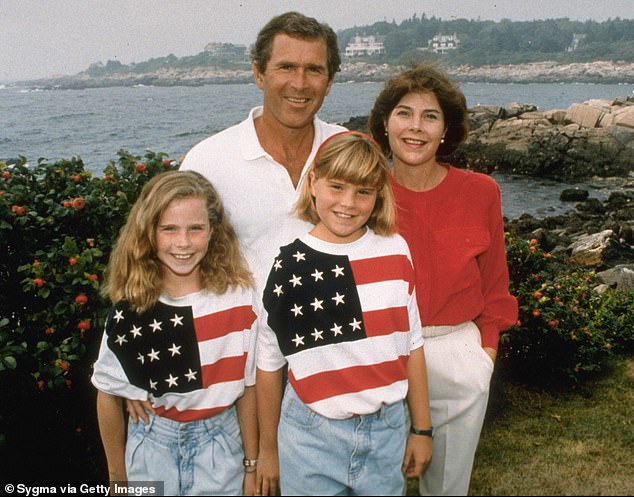 Memories: ‘My sister pierced one of these with a safety pin and an apple when my parents weren’t watching,’ Jenna (pictured with her family in 1991) said on the Today show on Monday 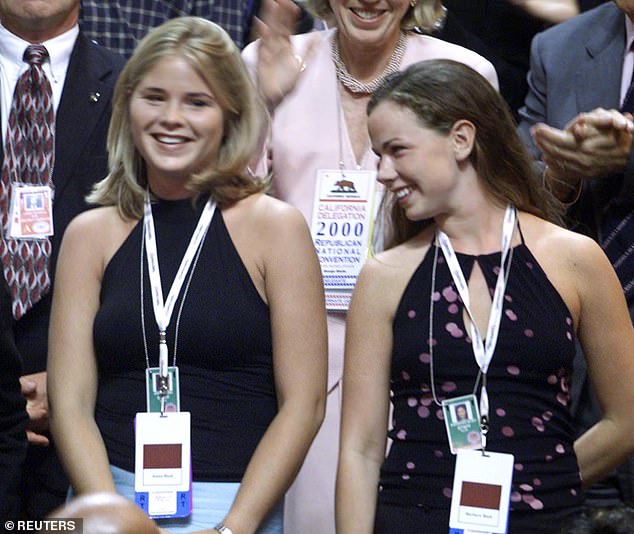 Rebel: Jenna added that Barbara (pictured in 2000) also tried to pierce her belly button while listening to a Led Zeppelin album, saying their father was like, ‘What are you doing?’

Jenna added that a few of her piercings were done when she was an adult, saying she got her ear pierced with Today co-anchor Savannah Guthrie after a work Christmas party.

Jenna said she also got one while out with NBC journalist Natalie Morales, which Hoda joked must have been a ‘drunky monkey’ situation.

‘Just because I was with Natalie does not mean it was drunky,’ she replied, adding: ‘We were in Key West — that means it was drunky.’ 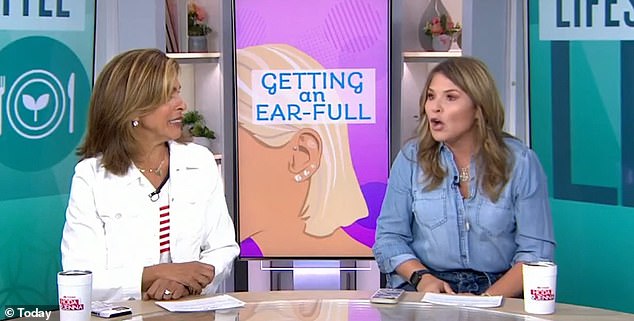 Opening up: As for Jenna’s other piercings, she said she got one at sleepaway camp and another two with her Today co-stars Savannah Guthrie and Natalie Morales 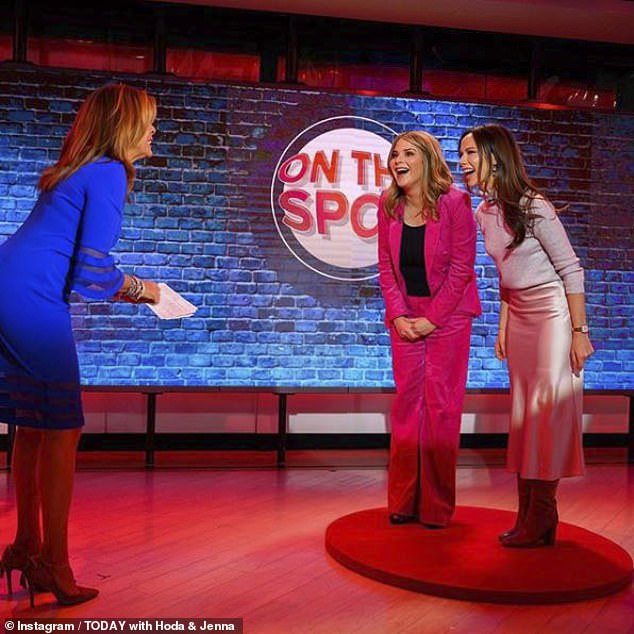 Daring twin: Jenna first shared that Barbara pierced her own belly button in the seventh grade while answering questions during a game of ‘On the Spot’ on the Today show in 2019 (pictured)

Hoda, 57, recalled how people used to go to the mall to get their ears pierced, saying stores like Claire’s and Spencer Gifts would do it.

‘It was like a gun, and it was like they go, “Pop!” and it would just go right through,’ she explained.

Jenna first called out her sister Barbara for trying to pierce her stomach while playing a game of ‘On the Spot’ on the Today show in November 2019.

When asked which one of them was the ‘rule breaker,’ Barbara said they both were, but Jenna couldn’t resist citing an example of her twin’s rebellious nature.

‘In the seventh grade, she pierced her own belly button,’ she said, shocking Hoda.

Vitamin E deficiency symptoms: The warning sign of 'oxidative stress' that you can feel 0

Australian Survivor moves to North Queensland for the next season 0

Former Nazi camp secretary in German trial, 96, on the run 0