I named my children after my favourite TV shows

A Manchester dad says he has received a...
Women

You’re for ever turning down the thermostat —...
Women

Are booze-free tipples really as healthy as you think?

A mother who named her five boys after TV and film characters – including the Joker – and says rude strangers have even said her choice of monikers ‘sound like criminals’.

Rachael Cresswell, 42, and her husband Daniel, 39, a fisheries enforcement officer from Torbay, South Devon, took inspiration from their favourite films and TV shows when naming their sons.

The couple have a one-year-old named Leif, after discovering that Leaf was the birth name of The Joker actor Joaquin Phoenix, who the couple are a fan of.

They also have Jaxon, eight, named after Sons of Anarchy character Jax; Noah, seven, from his namesake in The Notebook; Cole, six, from The Affair, and Bodhi, three, from Point Break. 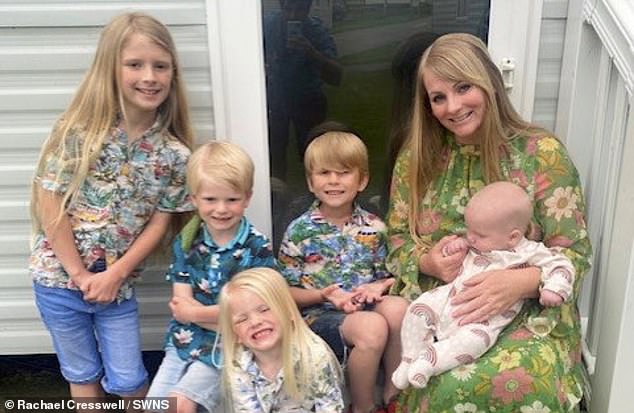 Rachael Cresswell, 42, and her husband, Daniel, 39, a fisheries enforcement officer from Torbay, South Devon, have named their five children after TV shows, movies and actors they like. Their youngest, one, is named Leif, the Scandinavian spelling of Joachim Phoenix’ birth name, because they liked him in The Joker. They also have Jaxon, eight, named after Sons of Anarchy character Jax, Noah, seven, from his namesake in The Notebook, Cole, six, from The Affair, and Bodhi, three, from Point Break

The choice to name their sons after TV characters and films came after Racheal and Daniel were looking for inspiration.

‘It was hard having to think of things,’ Rachael said.

‘They are all films or shows we’ve watched together and liked when I was pregnant.

‘It’s nice to have that connection to the pregnancy too.’ 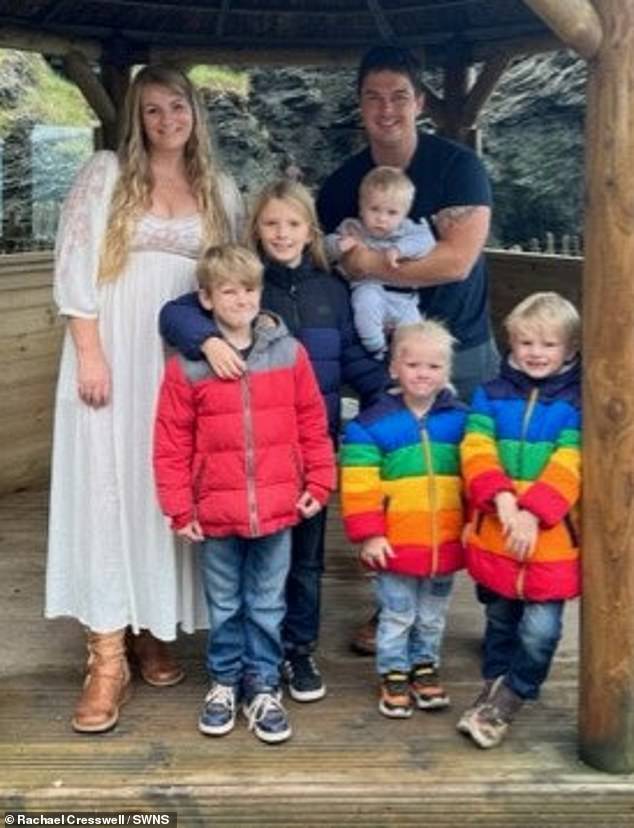 Rachael explained it was easier for her and her husband Dan to take inspiration from their favourite TV shows and movies, because they struggled with inspiration

Rachael says some people can be opinionated about her choices for her children’s names.

‘Someone told me that they though Jaxon sounded like a criminal,’ she said.

‘Some people were not so sure about the name Leif online, but family and friends love it. 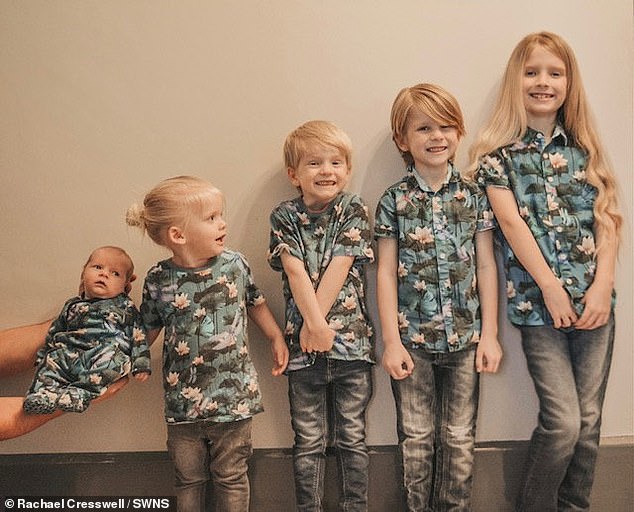 From left to right: Leif, one, Bodhi, three, Cole, six, Noah, seven and Jaxon, eight, who were all named after shows the couple loved 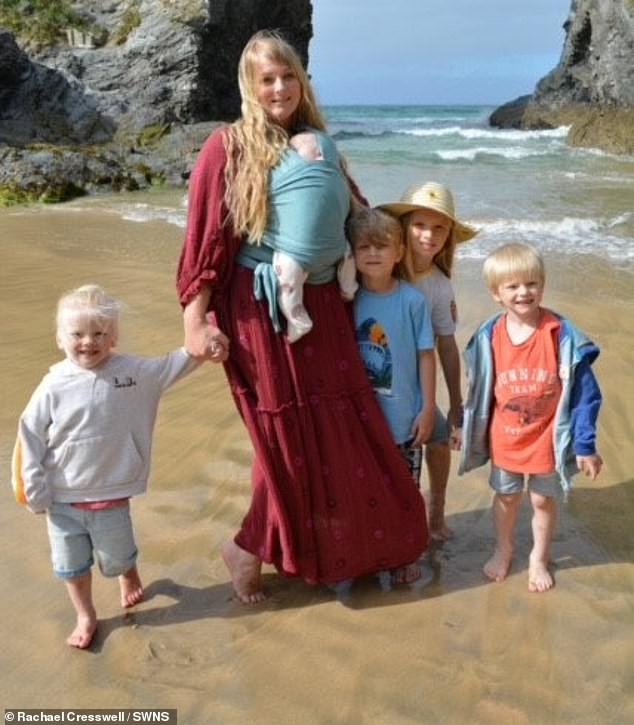 The mother-of-five, who said she loves that she has five boys, during an outing at the beach with her brood, following the birth of her youngest son in 2022

Rachael says parenting five boys can be hectic but they are usually well-behaved.

‘We go out to eat and people watch us,’ she said.

Rachael has never been bothered about having a daughter and even worried her one-year-old Lief would be a little girl – saying she ‘didn’t know how they would mix’ with her boys.

The mum-of-five says the family are constantly watched when they go out and are told by strangers how ‘well-behaved’ the children are. 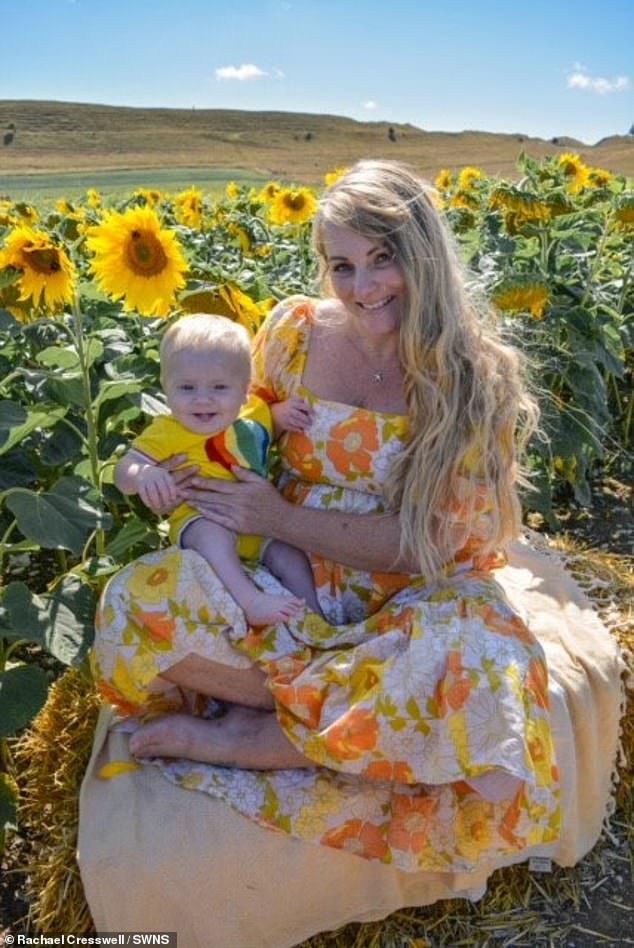 Rachael pictured with her youngest son this summer. She said that people often compliment her on how well-behaved her children are 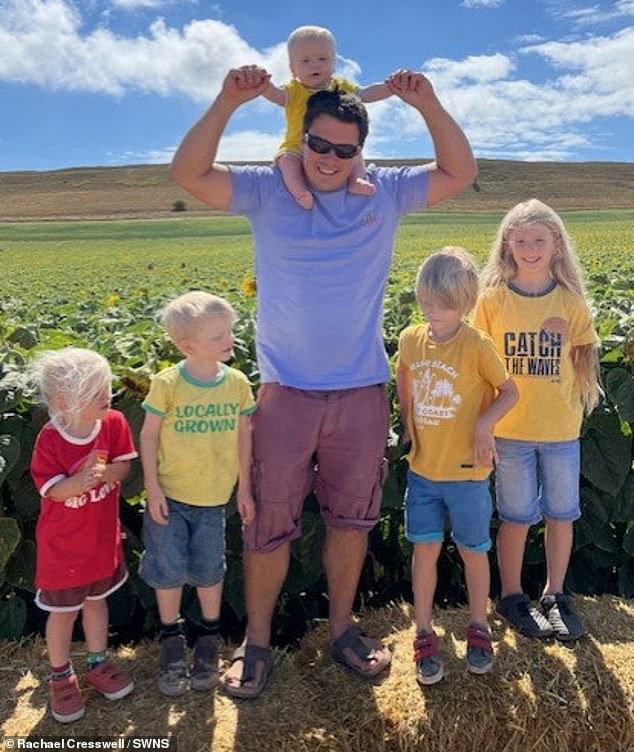 Dan with his five children. Rachael said her husband’s appreciation for Joachim Phoenix is the reason why their last child is named Leif

Rachael, a stay-at-home mum, , said: ‘They are all named after TV shows we were watching together while I was pregnant.

‘It was really great to give us inspiration. We were struggling with a name for Leif.

‘We were watching the film “Signs” and were commenting on how good Joaquin Phoenix is in it and then found out his birth name is Leaf.

‘Dan really liked him in the Joker too. The Scandinavian spell it Leif which is more common.

‘Ocean is Leif’s middle name because we live by the sea and I spent a lot of time at the beach. 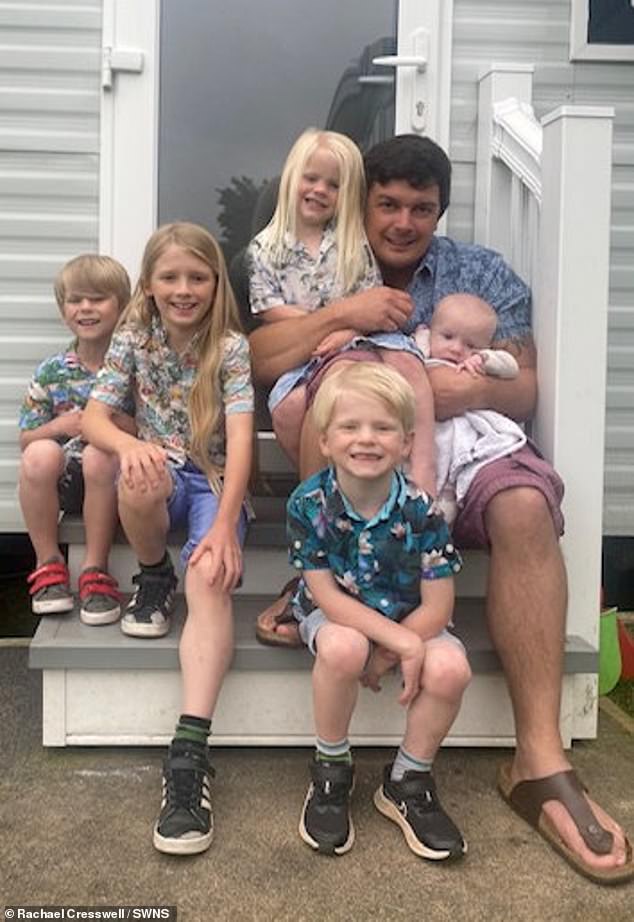 Dan with Jaxon, Noah, Cole, Bodhi and Leif. Rachel said that all her boys have grown into their names and that they suit them 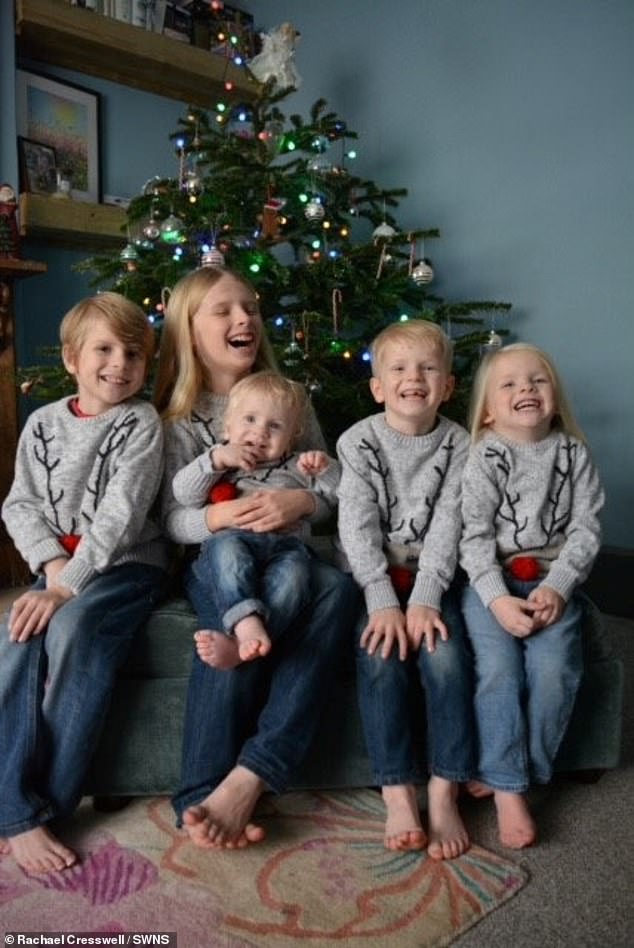 The five brothers during a festive family photoshoot last December. Rachael said she fell in love with motherhood after the birth of Jason

‘All of our sons have really grown into their names. Most babies suit their names I think.

‘People always ask if I want a girl, but with Leif I was actually worried he might be a girl.

‘Because it would be different and I didn’t know how a girl would feel about being around four boys.’

Racheal was unsure if she wanted children until she reached her 30s and decided she wanted to start a family.

After giving birth to Jaxon, now eight, via emergency c-section in February 2014, she found herself loving motherhood and fell pregnant with Noah six months later.

‘I didn’t now I would enjoy motherhood so much,’ Rachael said.

‘We ended up with three under three.’

‘People will come up and say: ‘We’ve been watching you and I’m surprised at how good they are.’

‘I think it’s because we don’t have screens when we’re out either.

‘I always have Playdoh and colouring pens on me which keeps them occupied and happy.’

Rachael says her boys all get on well but have different personalities.

‘Jaxon is sensible and has the purest of hearts,’ she said. He likes to mother his siblings.

‘Noah has autism and he’s quite quirky and really funny. Cole and Bodhi are both a whirlwind and Leif is very calm – for now.’

Previous article
Brothers of pregnant woman, 32, who was murdered say they are 'running on adrenaline'
Next article
Argos shoppers rave about an electric fan heater that heats whole room