King Charles was photographed smiling as he greeted...
Women

An Arkansas man has become a professional Black...
News

How do you crack retail in America? Just ask Rebecca Farrar-Hockley. The 51-year-old creative director of Kurt Geiger has catapulted the brand from beloved British shoe shop to one of the top-selling accessory brands in the US, where sales are set to top $100 million (£89 million) in 2023.

Not bad for a vicar’s daughter who was a self-confessed ‘naughty girl at school’ with ‘no plan of what I was going to do at all’. After reading English at Essex University and keen to earn money, she applied for a job at Selfridges, but her entry into the world of accessories was pretty much accidental. While waiting for said job interview, she was picked out as likely sales-girl material and offered a position in the Calvin Klein concession.

Fast-forward a decade and Farrar-Hockley had worked her way up to buying manager for women’s accessories, jewellery and shoes at Selfridges before joining Kurt Geiger –named after its Austrian founder – in 2002. Straight away, she realised that there was a gap in the market – what she likes to think of as ‘the sweet spot’ between high street and high end. There were customers out there, she figured, who wanted something special, something luxurious but who had a couple of hundred rather than a couple of thousand pounds to spend. Turns out she was absolutely right. 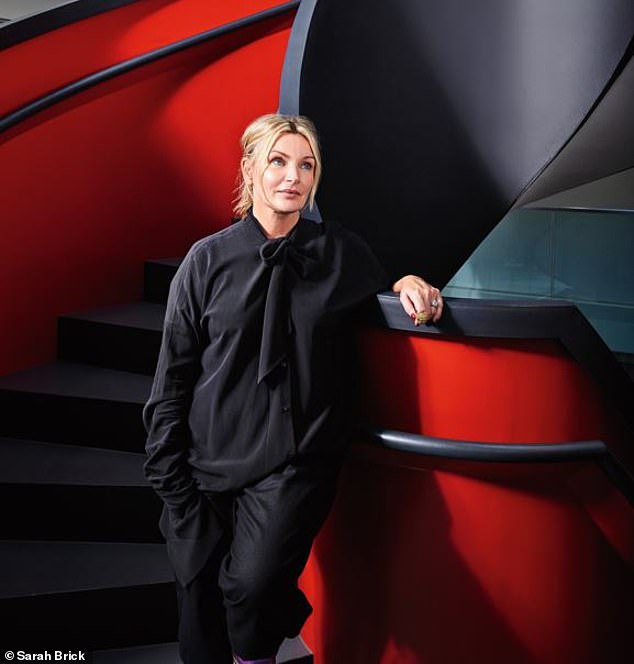 Farrar-Hockley had worked her way up to buying manager for women’s accessories, jewellery and shoes at Selfridges before joining Kurt Geiger –named after its Austrian founder – in 2002

Under her direction, Kurt Geiger has become one of the largest luxury accessory retailers in Europe, selling over four million pairs of shoes a year. And since its 2018 launch into the US market, the brand can now be found in 400 US department stores, with queues forming for the launch of each collection. But rather than shoes, it’s the distinctive Kurt Geiger handbags that have won over American women, making up 80 per cent of sales.

So what has been the secret to her success?

Farrar-Hockley considers the point carefully. For starters, she says, she hasn’t been shy about colour. In fact she’d go as far as to say that the rainbow is now considered a ‘neutral’ at Kurt Geiger ‘because it goes with absolutely everything’.She does admit, however, that this wasn’t an obvious design move in the US market which is traditionally more conservative than the UK. 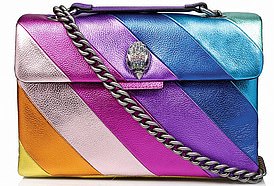 On shoes or bags… picking up on the return of silver jewellery.

Micro bags that hold a credit card and lipstick act almost like a necklace.

Clutches you could use to smuggle a flatscreen TV are big news. Espadrilles – for evening Embellished flats such as crystal espadrilles were hot last year and they’ll continue to reign supreme.

Every style age is reimagined – from 20s-inspired velvet to goth/grunge.

Neon is a thing but if that’s too scary, wear with pared-back tailoring.

Metallic, neon, elasticated… even with a spiked sole.

Not just for cold weather but for the hell of it, in mesh or satin.

‘You go to American department stores and everything looks the same: tasteful totes in taupe, burgundy and black,’ she explains. ‘Kurt Geiger is like a firework going off.’ That, however, turned out to be the point of difference that hooked Stateside fashion lovers. It’s what Farrar-Hockley describes as a ‘very British’, maximalist aesthetic and it was a gamble that paid off.

Another factor in the Kurt Geiger success story, she says, is that the brand has tried extremely hard to be responsive to women’s changing needs. ‘Our bestselling mini Kensington bag is nine square centimetres larger than it was when we first launched it because the average size of mobile phones has increased,’ she offers up as an example. Meanwhile, summer bags have more leather on the straps to stop them digging into exposed collarbones, while winter bags have longer straps to fit bulky coat sleeves through.

Which isn’t to say that Farrar-Hockley is easily swayed by the vagaries of fashion trends, although she has fallen for the whole Y2K (things we loved in the 90s and noughties) aesthetic.

‘When we were launching our recycled nylon bags in 2021, I wanted the finish to have shine. In the 90s, I had an amazing pair of cargo pants made from nylon which looked like satin, so I rooted them out.’

Neither does she allow herself to be unduly influenced by what her competitors are doing. ‘I don’t spend a lot of time looking into other brands. You’ve got to live in your customer’s head.’

Having said that, Farrar-Hockley does make sure she takes note of feedback, including from wholesalers. ‘They are the first to place their orders, so you can see what they like and what they don’t. Sometimes I don’t agree, but you get a feel for what’s working.’

So what’s next for the Hertfordshire-raised US style setter? Whatever else she does, Farrar-Hockley says she won’t be resting on her laurels – particularly as far as brand expansion is concerned. ‘People don’t shop in single categories any more – we buy televisions in supermarkets.’ Similarly, she says, ‘If you build a brand through a handbag, you tend to be able to launch other categories.’ With more accessories than ever being added to the Kurt Geiger range (think dog carriers, micro-bags and water bottles embellished with crystals), they are set to make up over 50 per cent of the brand’s global sales next year.

She won’t, however, forget her core customer: the woman who feels transformed by the right accessories. Not least because she knows exactly how that woman feels. ‘I love putting on a tiara or a massive velvet headband.’ She looks pleased at the thought of being perfectly in tune with her fanbase. ‘I like the immediacy of the effect of accessories. So does the customer.’

The UK has agreed with her for quite some time – and now, it seems, America does too.