The Government has today published plans to continue...

By Erica Nardozzi For Dailymail.Com

A furious bride-to-be revealed that her fiancé returned her dream wedding dress without her consent because he thought she was ‘wasting money’ on the ‘ridiculously expensive’ gown.

Reddit user u/Sealine5033 shared her story in the ‘AmItheA**hole’ forum, asking if she was in the wrong for flipping out on her future spouse for going behind their back ahead of their wedding.

The 29-year-old explained that she and her 33-year-old partner have been arguing about the cost of her dress, even though she paid for it herself.

‘This might sound cliché, but ever since I was young, I dreamed of having my own beautiful wedding dress,’ she said. ‘I can afford it, but my [soon-to-be-husband] thinks it’s not okay to waste a couple of thousands on a dress I’m only going to wear once.’ 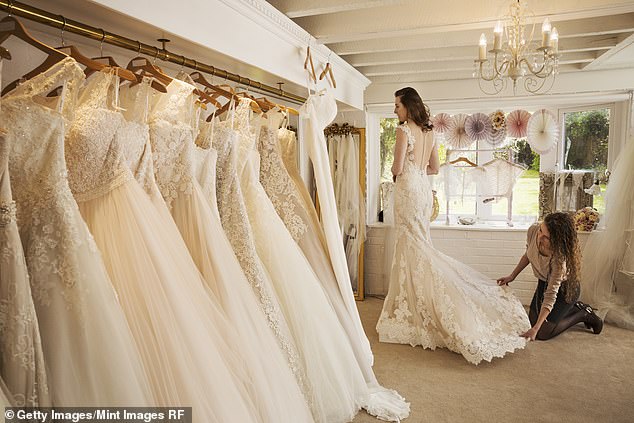 She agreed that he ‘might have a point there,’ but she noted that ‘this is the typical price for wedding dresses’ and this is a ‘once in a lifetime’ event that she wants to make special.

However, her rationale wasn’t enough to convince her fiancé, who suggested that she rent a dress instead of buying one.

‘He started saying that I’m being irresponsible with money and brought up how much money I’ve already put aside to “rent a face” (he means makeup) and wear “fake” hair (he means extensions),’ she recalled.

She admitted that she has a vision of what she wants to look like on her wedding day and believes that is her ‘right as a bride.’

‘I went ahead and purchased the dress, but a day later I found out that it was missing from my closet. I freaked out, but he told me he returned it and got the money back,’ she explained.

‘I was shocked. I asked him why he did that, and he said he thought the dress was ridiculously expensive and that [I] was wasting money and AGAIN suggested I go rent one.’

Thousands of people commented on the post, and many warned her to rethink marrying her ‘controlling’ and ‘denigrating’ fiancé

The bride said she ‘blew up’ on her fiancé and told him that ‘he had no right’ to return the gown when she was the one who paid for it.

‘He got upset and said that there’s no “I’m paying for it myself” in marriage and that my attitude is setting the tone for what type of dynamic we’ll have,’ she recalled.

He also accused her of expecting to pay for everything while she spends irresponsibly, but she insisted that she never tells him what to do with his money.

‘I responded that he gets zero say in how I spend my money whatsoever,’ she explained. ‘He told me that I should grow the [f**k] up and stop with the “dream wedding dress” cliché.’

The Reddit user added that he then stormed off and called his mother, who later ‘chewed [her] out’ and told her she wouldn’t let her ‘ruin her son’s financial stability.’

Her soon-to-be mother-in-law also urged her to rent a dress or buy a cheaper one and move on, but she refused.

The bride later updated the post to add that her fiancé is holding onto the money from her gown and will give it back to her when they ‘agree to a solution.’

Thousands of users commented on the post, and many of them warned her to rethink her upcoming wedding to her ‘controlling’ fiancé.

‘Maybe the theme of the wedding is Red Flags. The bridesmaids will wear red. The groom will have a red suit. And the aisle will be lined with increasingly big red flags until she reaches the altar which is actually just a tent made of one giant red flag,’ one person wrote. ‘Personally, I think she should call the cops on the man who stole several thousand dollars from her instead of marrying him, but that’s just me.’

‘Do you not hear how denigrating he is being? Calling makeup “renting a face?” He is belittling you and putting you down in the lead up to something that should be joyful and where he celebrates you as a person,’ someone else wrote. ‘This type of behavior escalates. If he is doing this BEFORE you get married, imagine it 10-fold in the years afterwards.’