A mum has divided opinion after sharing a...

Hilaria Baldwin has come under fire after she was filmed using a fake Spanish accent while speaking to reporters in New York City.

The 39-year-old wife of Alec Baldwin, who is currently facing an involuntary manslaughter charge over the fatal shooting of Halyna Hutchins on the set of movie Rust – a charge he describes as a ‘miscarriage of justice’ – chastised snappers for taking pictures of her children.

Hilaria – who was born Hillary Lynn Hayward-Thomas – apologised two years ago for faking a Spanish accent and claimed she had been raised with two cultures. Despite being born and bred in Boston, the yoga instructor can be heard slipping back into the fake accent as she tells the press pack to leave her and her family alone.

But she is not the only celebrity who has garnered attention over an apparently fake accent. Others, including Austin Butler, Donna Air and Joey Barton, who all left celebrity-watchers baffled after adopting inexplicable accents. 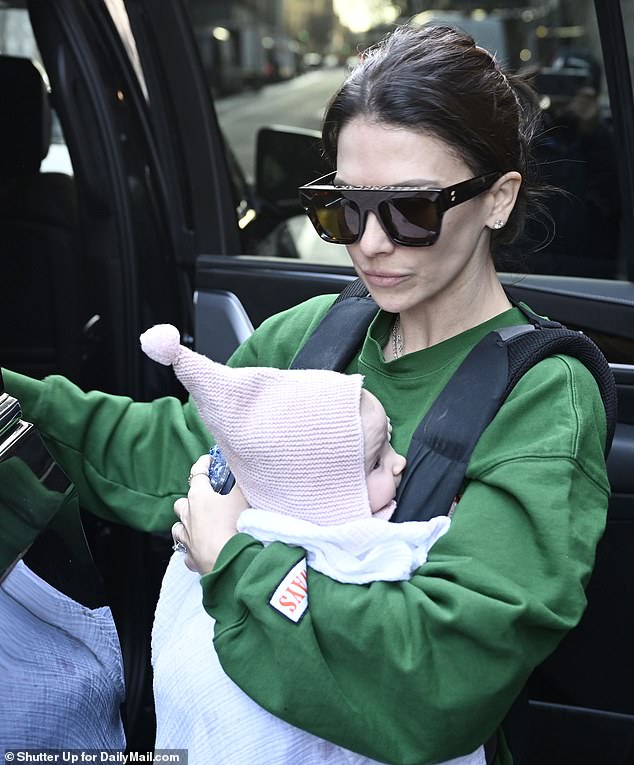 Other celebrities who surprised their fans when they changed their tone include Harry Styles, who appeared to adopt an Australian twang during a 2022 interview with Zane Lowe.

And his former One Direction bandmate Liam Payne also faced the wrath of accent watchers, when he slipped into a hybrid Irish-American-Scandinavian voice during an interview at a 2022 Oscars party.

One of the stars who faced the most criticism over their changing sound was Joss Stone, whose transatlantic drawl during the 2007 BRIT Awards provoked a furious response from fans.

Other celebrities who’ve made headlines with their bizarre accents include Steve McClaren who was widely derided after adopting fake Dutch enunciation, Madonna, whose 2000 marriage to Guy Ritchie inspired a British twang, and Lindsay Lohan who surprised fans with a ‘vague European’ accent in 2016.

Actor Austin Butler (pictured at the Golden Globe Awards in California this month) may retain his Elvis accent indefinitely, according to accent coach

Austin Butler surprised fans at the recent Golden Globes when he picked up his Best Actor award for his portrayal of Elvis – and still appeared to be speaking in the King’s Memphis drawl during his speech. He also showcased the voice during an episode of Saturday Night Live.

Despite filming for Elvis wrapping in March 2021, with the movie being released in June 24, 2022, the talented actor still appears to be holding onto the voice.

And according to his accent coach Irene Bartlett, who trained the 31-year-old star for the role, his new accent may stick around forever.

She said: ‘What you saw in that Golden Globes speech, that’s him. It’s genuine, it’s not put on,’ while speaking on ABC’s Gold Coast.

‘I feel sorry people are saying that, you know, it’s still acting [but] he’s actually taken [the voice of Presley] on board,’ she said, adding that the change might be permanent: ‘I don’t know how long that will last, or if it’s going to be there forever.’

She added: ‘Because of COVID shutdowns, he was working on it all the time and it’s difficult to switch off something you’ve spent so much focus [and] time on.’

Madonna has blamed ex-husband Guy Ritchie for the now-infamous English accent she adopted during their marriage.

The pair, who tied the knot in 2000, shared homes in London and Wiltshire – prompting the Queen of Pop to embrace British life until she filed for divorce from the film director in 2008.

Speaking in 2020 during a performance at the London Palladium, Madonna addressed the strange accent that she adopted during that time.

She said: ‘I didn’t know what anyone was talking about until I heard old interviews of myself and then I was horrified and flabbergasted. Why did you let me do that to myself?

Liam Payne made headlines after he adopted a strangely unplaceable accent during an interview at an Oscars 2022 party.

The former One Direction star appeared to combine an Irish-American sound combined with notes of Scandinavian as he spoke to a Good Morning Britain interview about Will Smith’s now-infamous slapping of Chris Rock.

Taking to Instagram stories to discuss the interview, Liam admitted he had ‘a lot to drink’ on the night, which could have contributed to his unusual sound.

He described himself as a ‘social chameleon’ and said his accent is ‘ever-changing’ depending on who he is around, before insisting he is normally ‘good at accents’.

Liam joked: ‘I’m good at accents, I pride myself on them! I just wish sometimes I could do my own.

‘No I mean, what can I say about that really? It was quite funny.’

Yes, this is how Lindsay Lohan speaks now! http://PerezHilton.com/LindsayLohan

Lindsay Lohan, who has recently hit the screen again with a role in Netflix movie Falling For Christmas, once baffled her fans when she debuted an unusual accent.

The talented actor showed off what was described by some media outlets as  ‘vaguely European’ tones while speaking to reporters at the launch of her Grecian nightclub in 2016.

She adopted what was described as ‘broken English’ as she chatted about the joy she had found in the European country where she admits she has ‘found good family’.

In the clip, Lindsay speaks with her apparent adopted dialogue as she says: ‘I said maybe there is something for me to do more here so I have a reason to come back.

‘My first time coming to Athens with Dennis, my friend, and that’s all he is my friend and business partner! But his mother became a very close person to me and his sister as well… When I went through hardships with my ex I really found ‘good family’ in these people from Greece.’

Speaking exclusively to MailOnline not long after the clip was shared, Lindsay confirmed she was sounding different, but suggested it was no big deal, and put it down to a thirst for leaning languages.

One of the most notable forays into fake accents came courtesy of footballer Joey Barton, who adopted a strange Franglais tone during a 2012 press conference.

The former midfielder showed off the unlikely twang following his loan league debut for Olympique de Marseille against Lille.

Speaking about the game in his new accent, Joey said: ‘For me it’s important that people speak about the qualities I bring as a footballer.’

The combination of his accent and strange wording led to comparisons with ‘Allo ‘Allo!’s Officer Crabtree.

Joey took to Twitter after the interview to address his strange manner of speaking, which had gone viral.

He wrote: ‘In my defence, it is very difficult to do a press conference in Scouse for a room full of French journalists. The alternative is to speak…like a ‘Allo Allo!’ character which is choose [sic]. Its simply a case of you had to be there. #youstupidwomen!’

Another viral sensation was born when Steve McClaren’s accent adopted a distinctly Dutch flavour during a 2008 television interview.

The football boss, who had recently been appointed head coach of FC Twente in Holland following a less than stellar performance as England Manager, spoke ahead of his new club’s clash with Arsenal.

Steve told the female interviewer: ‘Championsh League, Liverpool or Arshenal, I thought one of them we would draw and it is Arshenal I think.

‘To experiensh big gamesh, Championsh League… Arshenal… The Emiratesh… will be fantashtic for the playersh, not just for now but for the future ash well.

‘I shay I think we are not just… what you call?… underdogsh but mashive underdogsh.’

Donna Air, who hails from Newcastle, has surprised fans in the past with her ‘posh’ accent.

The TV presenter and actor initially face questions about her plummy tone after a 2013 interview at a yacht regatta on Isle of Wight.

At the time, Donna was dating James Middleton – the brother of the Princess of Wales – and it was suggested that his upper crust accents may have influenced her own speech.

But writing for the Mail On Sunday several years later, having once again made headlines for her ‘posh’ accent while appearing on Celebrity Masterchef, Donna set the record straight.

She wrote: ‘I’m an actress and a TV presenter: it’s my job to speak clearly, to communicate effectively on and off camera. My home has been in London for 20 years now, longer than I lived in my native North East.

‘I think it would be far weirder if I sounded the same as the ten year-old Donna who starred in TV series Byker Grove asking PJ (Anthony McPartlin, now half of Ant and Dec) if he’d like to share a banana milk.’

Back in 2007, at the peak of her career, Joss Stone confused fans when she appeared to have developed an American twang.

The singer, who grew up in a sprawling rural converted farmhouse in Devon, later moved to the US.

She credited spending her early 20s in the States with changing her tone, after facing ridicule following her appearance at the 2007 BRIT Awards.

Speaking several years’ later about the reaction to her drawl, she said she could not understand why it had caused such a backlash.

Joss said: ‘It’s not really that big a deal is it? I didn’t kill anyone – I wasn’t snorting cocaine and punching paparazzi and showing my vagina to the world – I just had a little bit of a twang – Jesus calm down!’

She added: ‘What’s so funny is the label cancelled all of my press for that record because of that day.

‘They just cancelled every little piece of press and then they wondered why everyone was saying “Oh she’s moved to LA, what’s going on? She’s not spending any time here”. I did not move to LA I live in Devon.’

HARRY STYLES LEAVES FANS BEMUSED AS HE SLIPS INTO AUSSIE

Harry Styles left fans baffled over his changing accent following a May 2022 interview with Zane Lowe.

The Redditch-born singer joined the Apple Music presenter for a sit down interview ahead of the release of his highly-anticipated third studio album Harry’s House.

He appeared to debut a new sound, disappointing some fans who lamented the loss of Harry’s northern accent – which followed his former bandmate Liam Payne debuting a strange transatlantic accent earlier in the year.

Reacting to his new tone, one fan tweeted: ‘Harry Styles becomes another One Direction band member with a completely bizarre accent.’

One upset follower posted: ‘Why am I so affected by harry styles losing his lil soft northern accent.’