An ominous test that claims to reveal which...
News

Russia is expected to soon unleash a new...
Women

Upgrade to a self-propelled, motorized spin mop – and save $40 on this cordless tool now

Stacey Dooley shared an emotional snap on social media after she this week gave birth to her first baby with Kevin Clifton – who she met on the hit BBC show Strictly Come Dancing.

However, the loved up couple aren’t the only ones to have fallen for the infamous romantic ‘curse’ plaguing the ballroom competition.

Here, FEMAIL takes a look at other past contestants who met their significant other on the show, and went on to have kids with them.

The adorable couples include Gemma Atkinson and Gorka Marquez, Rachel Riley and Pasha Kovalev and Ben Cohen and Kristina Rihanoff. 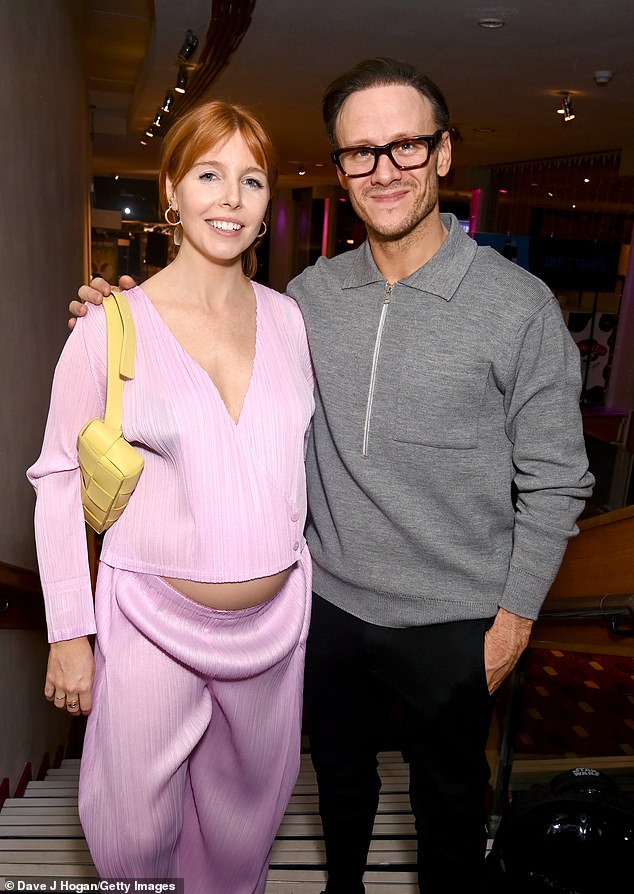 Stacey Dooley shared an emotional snap on social media after she this week gave birth to her first baby with Kevin Clifton. The couple pictured in October

Stacey Dooley has this week given birth to her first child with former Strictly Come Dancing star Kevin Clifton.

The presenter, 35, revealed she’d welcomed a baby girl to the world with a sweet Instagram post on Monday, gushing that she was ‘obsessed’ with her ‘little masterpiece’.

Stacey – who won the 2018 series of the BBC ballroom competition with Kevin – also revealed they named their daughter Minnie.

Alongside a picture of an envelope addressed to ‘Minnie’s parents’ she penned:  ‘Our daughter is here. 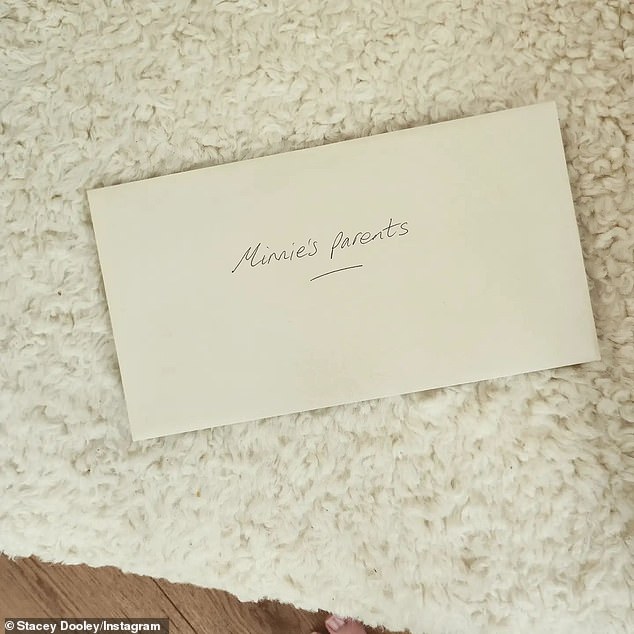 Alongside a picture of an envelope addressed to ‘Minnie’s parents’ she penned: ‘Our daughter is here’

Kevin, 40, shared the same image and penned: ‘Our daughter is here❤️❤️❤️❤️ The most beautiful thing I’ve ever seen. So proud of u. Love u Minnie , Love u Stace x’

Stacey and Kevin announced their pregnancy news in August, sharing a snap of her cradling her bump to Instagram.

The broadcast journalist wrote at the time: ‘Gaaaaaaang… We are having a baby! So bloody delighted. Kev, you’re magic, I love youuuu. 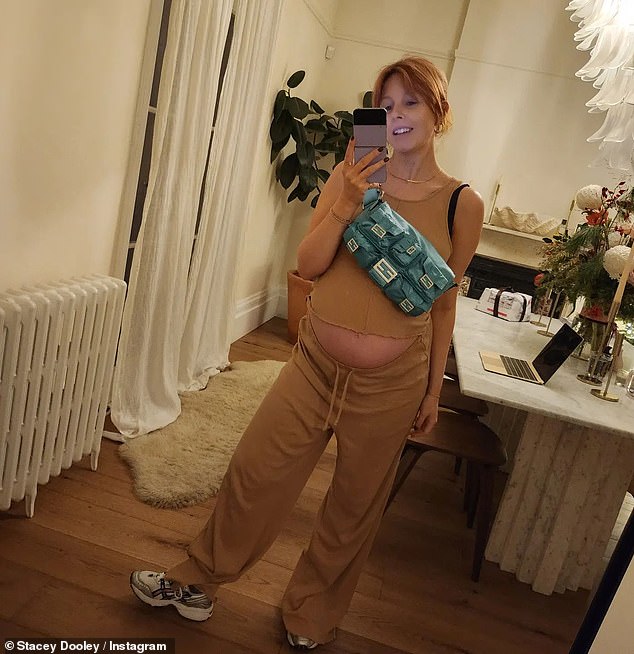 ‘(Was becoming impossible to hide and if one more person asks me if I’ve had my tits done in LA I’m gonna scream). Here goessssssss.’

Kevin also shared the same picture and wrote: ‘We’re having a baby! ❤️❤️❤️ And I think my girl @staceydooley looks beautiful pregnant.’

And explaining her excitement, Stacey appeared on The One Show just days later to gush over the good news.

‘I’m delighted, I can’t quite believe it,’ she excitedly told host Ronan Kemp after he congratulated her.

Ronan said to the journalist: ‘We have to start by saying congratulations, big news today from yourself and Kevin.’

‘Thanks mate, I can’t quite believe it. I’m delighted actually, I feel really lucky. Because I’m 35 so you never take it for granted,’ explained Stacey.

Stacey and Kevin were crowned Strictly champions in 2018 after winning viewers’ hearts with their incredible partnership. 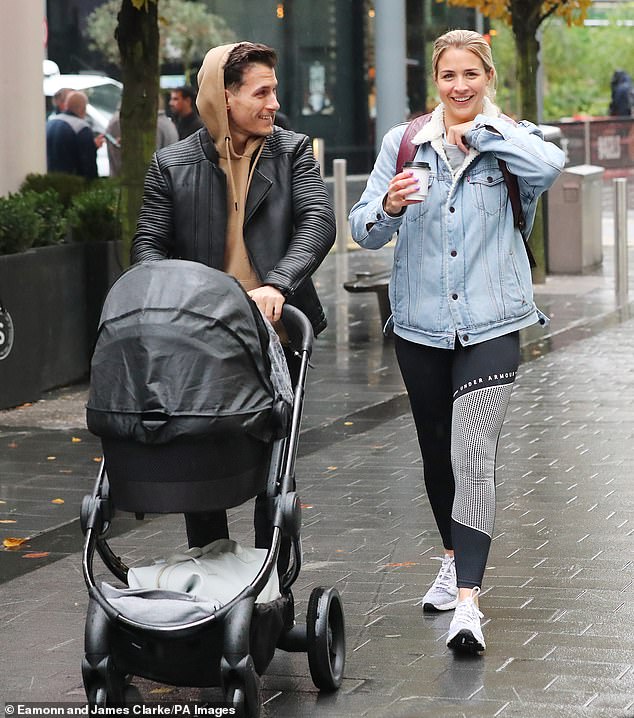 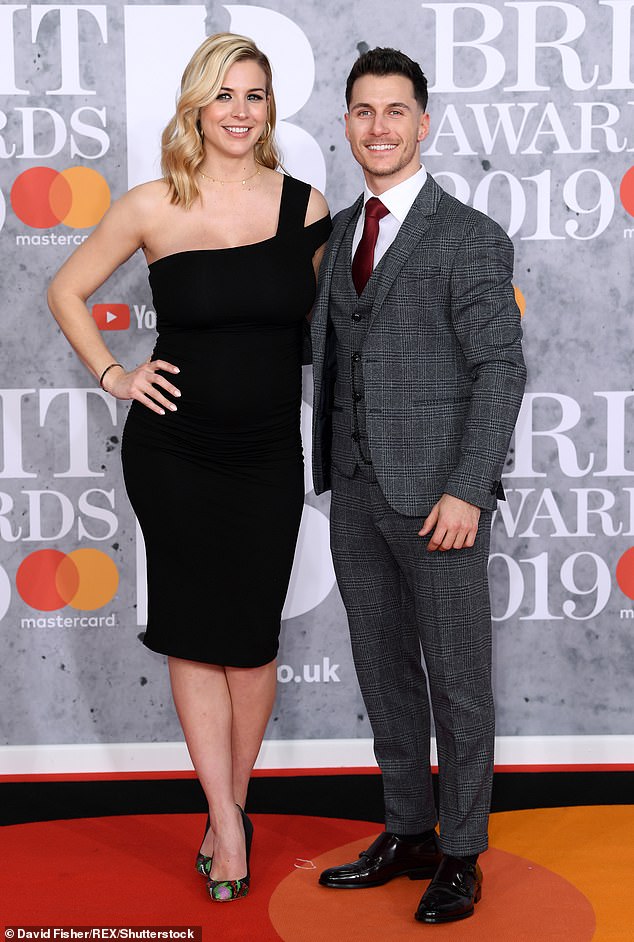 Earlier last year the soap star admitted she ‘resented’ her fiancé because he was forced to go back to work just three days after she gave birth to their daughter. The couple pictured in 2019

Hollyoaks star Gemma Atkinson, 38, met pro Gorka Marquez, 32, during the 2017 series of Strictly Come Dancing – and flirtations brewed even though the pair wasn’t coupled up.

Gorka was partnered up with Alexandra Burke that year, while his fiancé danced with Aljaz Skorjanec.

Both made it through to 2017’s Strictly finals with their respective partners – with romance rumours flying between them throughout – and the couple then announced their engagement on Valentine’s Day, 2021.

Gemma wrote on Instagram at the time: ‘Valentine’s forever… Of course I said yes’, while Gorka penned: ‘The best day with my forever Valentine’s. I asked and she said YES!!!!!! Happy Valentine’s Day everyone.’

They confirmed their romance as they celebrated their first Valentine’s Day together in 2018.

Gemma and her Strictly partner welcomed their baby girl into the world in July 2019 – and earlier last year the soap star admitted she ‘resented’ her fiancé because he was forced to go back to work just three days after she gave birth to their daughter Mia.

Talking on Lorraine, the actress admitted that while it wasn’t Gorka’s fault that he had work commitments – and that he wanted to be at home with her and their newborn – she realised ‘this was her life now and nothing had changed for him’.

Speaking to presenter Christine Lampard, Gemma said: ‘Gorka had so much grief for going back to work three days after we had the baby.

‘But, he had a contract. It wasn’t just his show. He had a production that he couldn’t look down.  He had to post stuff on social media to promote the show and sell tickets.’

‘I was seeing all the stuff online looking down at the stitches with nurses coming round and Mia crying. I was like “This is my life now, nothing’s changed for him.”‘

Gemma went on to reveal how the Spanish dancer, who joined the hit BBC show in 2016, was so down he confided in one of his close friends on the tour.

She said: ‘Giovanni texted me and said Gorka hasn’t been himself. He got really upset saying “I don’t wanna be here, I wanna be at home with you and our baby.”

‘It’s just as hard for the person going back to work. You resent each other’s situation a bit.’

Detailing how she’s found being a new parent she noted: ‘I take my hat off to anyone who parents because it’s tough.

‘It’s so rewarding but it’s tough – you look at this little human that you’ve got to keep alive.’

The radio host was at the time releasing her second fitness and recipe book, titled The Ultimate Body Plan for New Mums.

Speaking in the candid morning interview, the mother-of-one also reflected on her experiences of childbirth after having to undergo an unplanned caesarean. 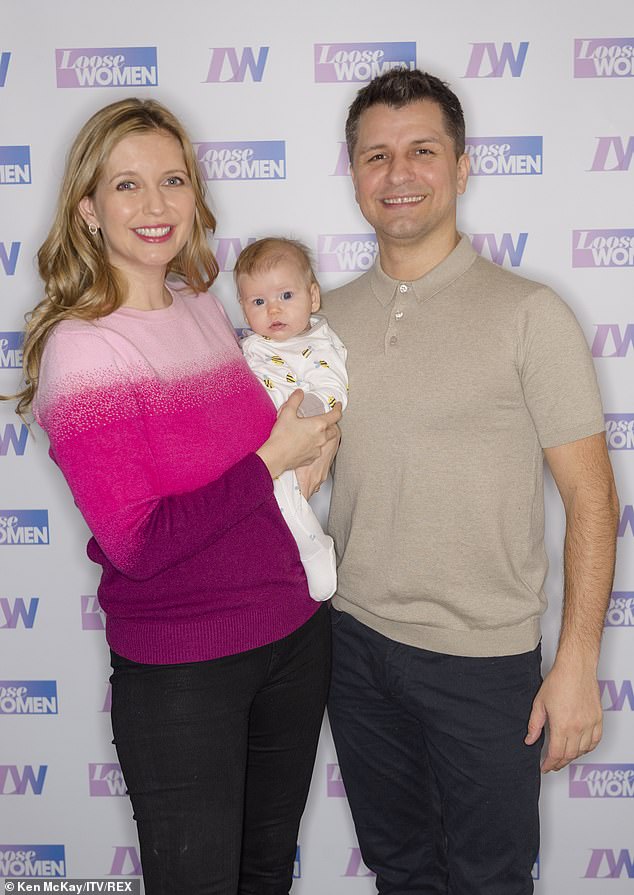 Rachel Riley first met Pasha Kovalev when they were partnered on Strictly Come Dancing in 2013, going official with their romance the following year. The couple pictured with their youngest daughter Noa last year 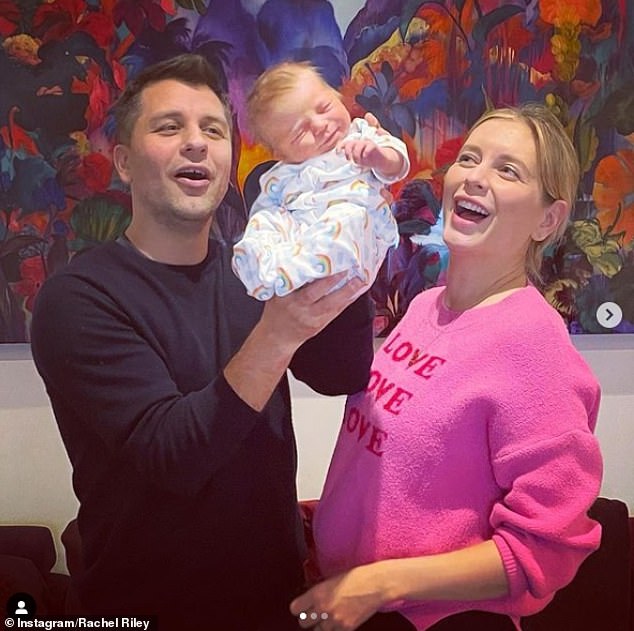 Rachel Riley first met Pasha Kovalev when they were partnered on Strictly Come Dancing in 2013, going official with their romance the following year.

The maths whizz, 37, ended her 16-month marriage to ex-husband James Gilbert weeks after she was eliminated from series, with the split cited as another example of the ‘Strictly curse’.

The former couple had been together since they met when they were both studying at the University of Oxford.

Rachel and Pasha announced they were set to become parents for the first time in May 2019 and went on to marry one month later in Las Vegas that June.

They kept the ceremony ‘so secret’ that the majority of their friends and family were said to have been completely unaware of the nuptials.

Maven, now three years old, was born in December of 2019 and in November 2021, Rachel became a mother for the second time when she welcomed baby daughter Noa into the world.

Rachel gave birth to her now one-year-old at the family home in London on November 5, more than a fortnight after her due date.

The TV star announced the arrival on social media, writing: ‘We have some news…! Introducing Pasha’s newest dance partner – baby Noa was finally born, 15 days after her due date, late on Friday night to the sound of fireworks! 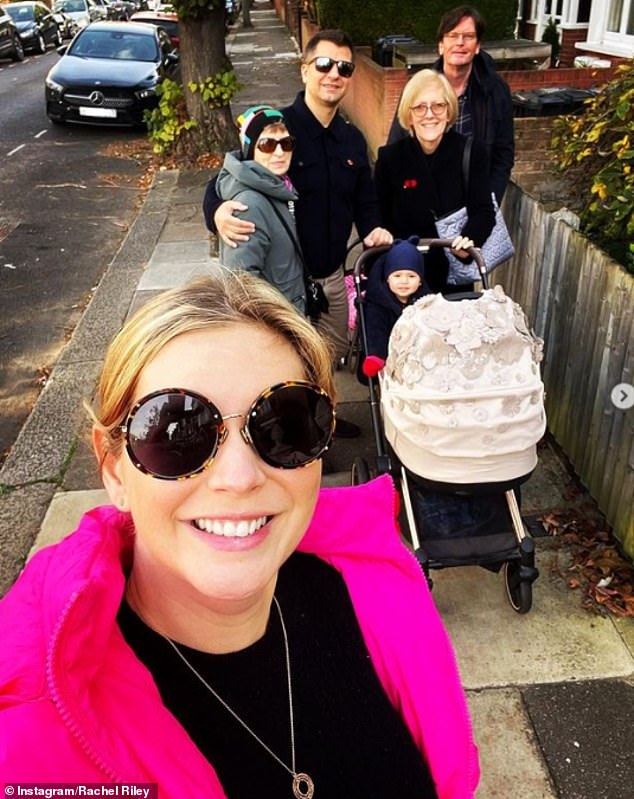 ‘She’s totally adorable and her big sister Maven has already tried welcoming her to the world by offering Oatly and pickles, we think that’s a good sign.

‘Massive thanks to the wonderful home birth midwives team and my doula who looked after us all so well.’

Rachel also referenced her ‘rainbow baby’ after tragically suffering a miscarriage between her two pregnancies.

She added: ‘Ps thanks too to my namesake @rachelrileyuk for the lovely rainbow baby clothes for our gorgeous rainbow baby. Our family feels complete now she’s here.’ 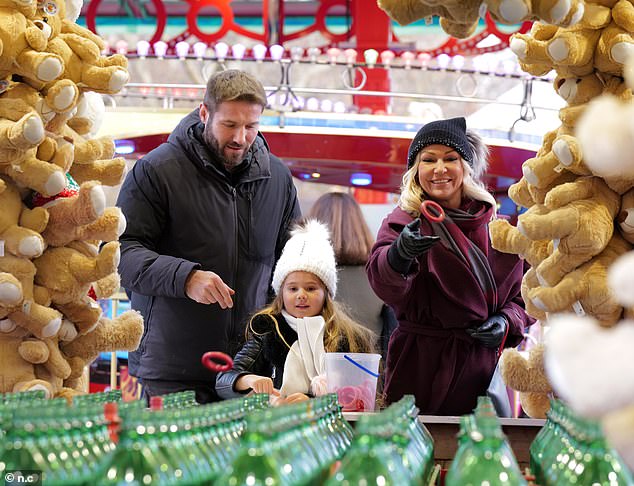 Last month, the couple was pictured in wholesome family snaps as they treated Milena to an action-packed day at Winter Wonderland

Ben Cohen and Kristina Rihanoff fell in love when they were partnered up on the 11th series of Strictly in 2013, despite Ben being married at the time – but the pair, who have a six-year-old daughter called Milena – only got engaged in November last year.

Speaking to Hello! magazine, Kristina, 45, revealed that the proposal came in the middle of their 16-day holiday.

Releasing a picture of the big moment, the former Strictly star said Ben getting down on one knee was ‘the biggest surprise of my life’.

They had taken a boat trip to a neighbouring island, when Kristina saw a heart made up of lit lanterns and the words ‘Will you marry me?’ written in the sand. 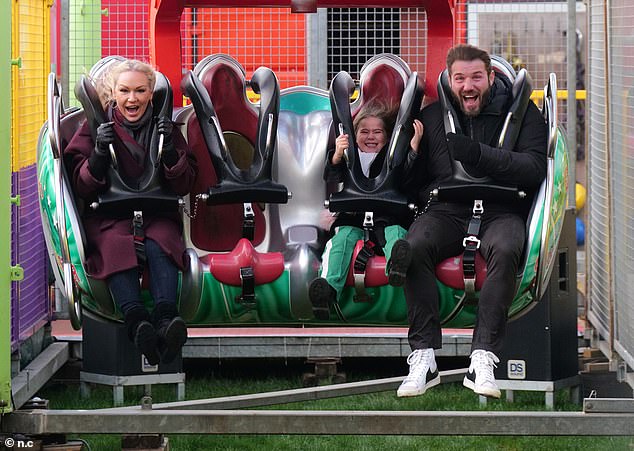 Kristina and the ex rugby player, 44, appeared to be having a blast as they ventured round Hyde Park

The Russian dancer said: ‘Although we’d talked before about getting married one day, I hadn’t the slightest idea that Ben was planning this.

Ben is also father to 13-year-old twins Harriette and Isabelle from his previous marriage to Abby.

Last month, the couple was pictured in wholesome family snaps as they treated Milena to an action-packed day at Winter Wonderland.

Kristina and the ex rugby player, 44, appeared to be having a blast as they ventured round Hyde Park.

The former Strictly dancer unleashed her inner child as she took her daughter for a spin in the dodgems before encouraging Ben to have a go on the merry-go-round.

An ominous test that claims to reveal which...

Russia is expected to soon unleash a new...

An ominous test that claims to reveal which...

Russia is expected to soon unleash a new...