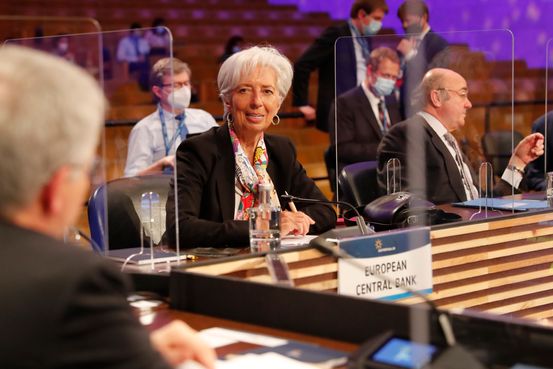 FRANKFURT—The European Central Bank signaled that it would support the eurozone economy by keeping interest rates low for longer as a surge in Covid-19 cases driven by the highly contagious Delta variant triggers new social restrictions and weighs on the region’s large tourism industry.

The ECB’s move is in part a response to its new policy framework, unveiled two weeks ago, which aims to give bank officials broader powers to stimulate the economy when inflation is too low.

The central bank said in a statement that it won’t increase its key interest rate, currently set at minus 0.5%, until inflation moves much closer to its target of 2% and looks likely to remain at that level. “This may also imply a transitory period in which inflation is moderately above target,” the bank said. The ECB had previously given a looser commitment to hold interest rates until inflation looked likely to hit its target within a few years.

While a surge in prices has stirred fears the U.S. is entering an inflationary period, the eurozone has long been mired in low inflation, despite years of ultra loose monetary policy.

The ECB also reiterated its pledge to buy eurozone debt under an emergency €1.85 trillion bond-buying program, equivalent to $2.2 trillion, through at least March 2022.

news conference, starting at 8:30 a.m. ET, for clues as to the bank’s view on the economic outlook and next policy steps.

Ms. Lagarde is expected to deliver a shorter, clearer policy message at Thursday’s news conference, which might include fresh guidance on when the bank will start slowing or phasing out its bond purchases, or increasing interest rates.

The eurozone’s economic recovery is lagging behind that of the U.S., and Ms. Lagarde has signaled that the ECB might keep its easy-money policies in place longer than the Federal Reserve.

Several Fed officials have indicated they are eager to start shrinking the Fed’s monthly purchases of $120 billion in Treasury or mortgage securities as inflation heats up, although Fed Chair

has suggested that he is in no hurry to do so. Fed officials will discuss the topic at their meeting on July 27-28.

Under the ECB’s new policy framework, its first in almost two decades, the bank has committed to a clearer inflation target of 2%, instead of just below 2%, and said it would pursue that target more forcefully when interest rates are close to zero. The ECB is currently buying about €80 billion of eurozone bonds a month under an emergency bond-buying program launched in March 2020.

New Covid-19 cases are accelerating in countries such as Spain and the Netherlands, although hospitalizations remain low given widespread vaccination among vulnerable groups. New social restrictions have been imposed in popular holiday spots such as Catalonia and the island of Mykonos.

“A strict interpretation of the [ECB’s new] strategy might even suggest paving the way for more, but definitely not less, asset purchases,” said

an economist with ING Bank.

Still, many investors are skeptical as to whether the new framework will translate into actual policy changes because it reflects a delicate compromise between conservative policy makers in Northern Europe who tend to worry about high inflation, and those in Southern Europe who are more concerned about weak growth. Unlike the Fed, the ECB won’t actively aim to run inflation above target to make up for previous shortfalls.

Write to Tom Fairless at tom.fairless@wsj.com