At 18, university wasn't for kids like me… at 55, I finally feel I belong here

Interest rates have continued to remain high as...
Women

Have you ever walked into a thrift shop...
News

Emergency services have rushed to Trafalgar Square after...
Women

At the bar, I experienced my first moment of self-doubt and discomfort. Should I go for my usual: a single gin and slimline tonic, or would I be committing an enormous faux pas?

Should I order a pint? If so, which one? What about snakebite? Do people still drink that anarchic concoction — equal parts cider and lager, sometimes with a sickly dash of blackcurrant cordial — that I remember from the Eighties?

I couldn’t possibly order wine. It would be ghastly; age and experience has burdened me with standards I simply cannot divest, plus I thought everyone would laugh. I might as well go all-out ‘nanna’ and order a Cinzano and lemonade or a sweet sherry.

In the end I went for a bottle of Peroni — a drink I usually enjoy ice-cold from a glass in the garden of my very middle-class, four-bedroom family home in North London. 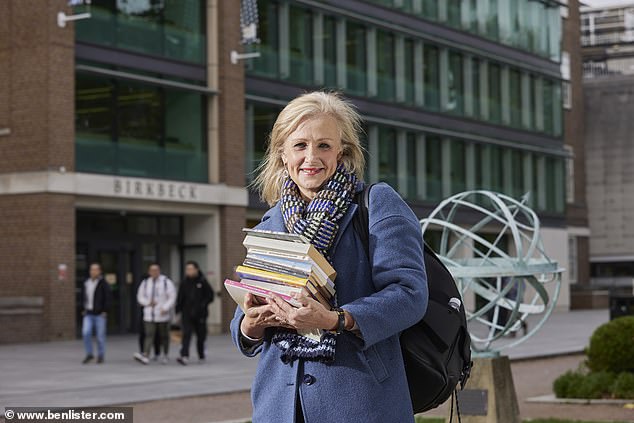 Julia Lawrence (pictured) opens up about being a mature full-time undergraduate applicant, at 55 years old

Then came the really embarrassing part — producing my Student ID which granted me 20 per cent discount.

The bartender looked at my card, glanced quickly up at me, made no comment whatsoever, took my money . . . and it was all over. I’d bought a round, in the Students’ Union bar, as a university student, for the first time ever, aged 53.

Last year, I started a Bachelor of Arts course in Creative Writing at Birkbeck, University of London. I wasn’t ‘going back to college’— this is my first degree.

Like the singer Adele, who confessed recently that, at the age of 34, with £164 million in the bank, she’s planning to take time out in 2025 to do an English Literature degree, I decided to take a step back from my job as an editor at this newspaper and set myself a new challenge.

We’re part of a growing trend: this year Ucas data shows mature full-time undergraduate applicants rising by 24 per cent to 96,390 — an extra 18,540 students.

Adele told an interviewer that she regretted not going to university, and I’m with her on that point. It is, without doubt, one of the biggest regrets of my life that I didn’t go at the ‘right’ age of 18.

So why didn’t I? Well, it wasn’t really the done thing in my family. University was for ‘the other lot’. We went out to work.

I grew up in a largely working-class area of Clacton-on-Sea, Essex, and attended the local comprehensive, where expectations were low. 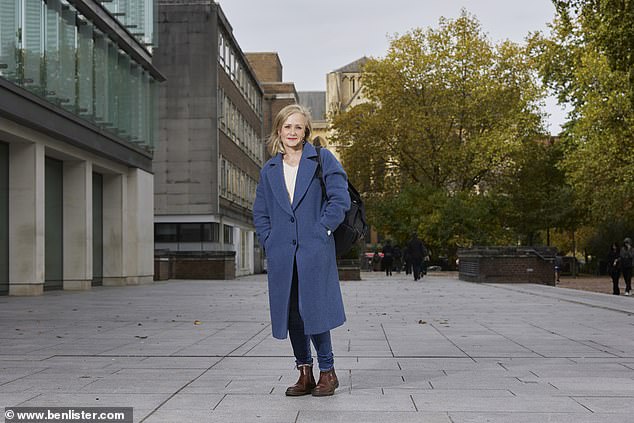 Julia grew up in a largely working-class area of Clacton-on-Sea in Essex, and attended a local comprehensive

Of course, there were exceptions. A few students from my school got into Oxford and Cambridge, but their parents were teachers, doctors or aspirational types who worked in the City who, themselves, had been educated to a high level. My parents, although very bright, had both left school at 16.

I can’t put the blame entirely on others, though. In truth, I didn’t work hard enough or get the grades to go to a good university. I was far more interested in sneaking off to gigs and going to parties than studying.

Plus, it was much rarer for students to go to university back then. I sat my A-levels in 1986, when only 15 per cent stayed in full-time education after the age of 18.

During his time in office, Labour Prime Minister Tony Blair set a target for the proportion to rise to 50 per cent — a landmark figure which was achieved in 2019.

I was lucky enough to be accepted into the National Council for the Training of Journalists college, which involved a year’s study, after which I became indentured to a local newspaper and qualified two years later.

I never felt I’d sold myself short. Virtually everyone I knew then had arrived via this route. Plus, we were young, sociable, and solvent, so there was a lot of fun to be had.

The chip on my shoulder arrived a few years later, when I ventured into national newspapers and magazines, where I met many people who’d been to public schools and good universities. 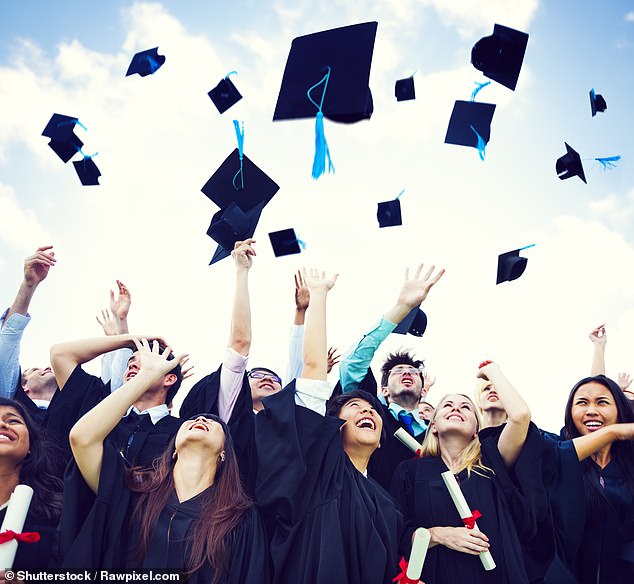 Though Julia is always invited for a drink after late lectures, she draws the line at going to nightclubs with them

It was my first inkling of an active class divide in the UK. It felt as though I’d been walking around all my life with my dress tucked in my knickers, and no one had told me.

So, I started to fib, or be vague and obfuscate. Most of the time, my non-graduate status didn’t seem to matter to employers: I knew a lot of people, I worked hard and had flair.

Applying ‘cold’ as an outsider, however, was another matter. The graduate always seemed to get the job. But over time, I reached a professional level where my lack of degree was irrelevant.

However, the chip on my shoulder remained, and I vowed I’d do something about it one day.

My two children both went to university. The younger one graduated last summer, at which point I decided it was my turn. I’d worked, and saved, hard my whole life and could afford it.

My husband and children were wholly supportive. I’d ‘totally boss it’, my son said. My daughter was more excited by the fact I would have a Unidays student discount card she could rip off.

But what’s it like being surrounded by kids, everyone asks. Well, for a start, they’re not all kids. There are a few very young ones, but mostly they’re in their 20s. Still, I’m usually the same age as their parents.

There are a few very mature students, like me, who are semi-retired and ready to take on a new challenge.

While it’s great being around young people — I adore their fun, energy and vocabulary — of course I worried, at first, about the generational differences.

I actively avoid certain subject matters, namely J.K. Rowling, cancel culture and the world of woke. Having sparred vigorously, and fruitlessly, with my own two children over the years, this is a minefield I simply cannot be bothered to navigate.

Not that any inflammatory subjects have come up so far: contrary to alarmist reports of universities being stymied by snowflake students bursting into tears over missed trigger warnings, in my experience, with a few rare exceptions, they’re a measured lot.

Though I’m always invited for a drink after late lectures, I draw the line at going to nightclubs with them. I like to be in bed by 11pm and, frankly, a 55-year-old woman trailing around a nightclub with a bunch of 20-somethings would just be tragic.

My first visit to the Students’ Union bar really brought home how much older I was than everyone else. I looked around at my companions who, to me, didn’t look old enough to be drinking.

I started worrying about how they’d all get home safely, and I often ask fellow students if they are eating properly.

As far as the studying goes, it’s been a revelation. Having been such an inverted snob about academia for so long, I assumed it would be a breeze. I’d snooze through a few lectures, knock out a couple of essays and someone would hand me a degree.

It’s actually hard work, thinking in a way I’ve never thought before, and flexing brain muscles I never knew existed. And yes, I still have moments of self-doubt when I fear I’m simply not bright enough, despite my good grades — I got two ‘Firsts’ and two 2:1s in my end-of-year exams last summer.

Unsurprisingly, I’m super swotty — I actually read my summer list books, and everything is always handed in on time.

That said, I am aware of how much effort it takes to assimilate and retain information now I’m in my 50s. It doesn’t matter that I’m wearing Doc Martens boots and carrying a Student ID card, my brain is 55 years old and, the truth is, our brains begin to shrink when we’re in our 30s or 40s, with the rate of shrinkage increasing around the age of 60.

It’s also harder for an older brain to stay focused, particularly under pressure, scientists say. Researchers at the University of Southern California found stress has much less of an effect on young people, who are able to focus on the task at hand and block out unnecessary distractions.

Socially, however, I feel I’m at an advantage. I left behind the self-doubt and awkwardness of youth many decades ago, and it’s true that after a certain age, you really don’t care what people think about you any more. It’s wonderfully liberating.

There are other areas where age and experience can work in your favour. Last year, we were studying a book by Deborah Levy called The Man Who Saw Everything.

It’s a beautiful book, with a unique plot structure, that weaves between time frames, taking the reader to and from East Germany in the 1980s before the Berlin Wall fell. I was in my element.

‘How do you know all this stuff?’ asked the youngster next to me. ‘I was alive — I remember it,’ I replied. ‘This isn’t history to me.’

Would I have been as enthralled in the text at 18? No, I wouldn’t. I would have been skipping lectures, sleeping off hangovers. The beauty of this work would have been lost on me. I’m glad I’m studying it in my 50s.

George Bernard Shaw once wrote that ‘youth is the most precious thing in life; it is too bad it has to be wasted on young folks’. I’d extend that to education. Sometimes it takes an old one to appreciate it.

Previous article
Life's little luxuries: FEMAIL picks out a selection of fireside chairs
Next article
How to dress like a grown-up with Shane Watson: Collar this season's latest trend, like Cate