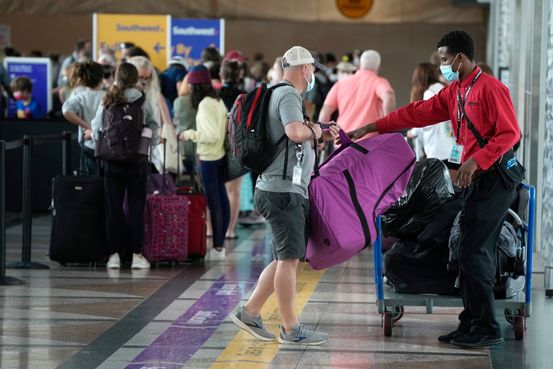 The strength of the air travel rebound this summer outpaced what many airline executives had anticipated. Roughly two million people have passed through U.S. airports each day recently, according to the Transportation Security Administration.

That has helped lift airline revenues, but it also brought unanticipated challenges for carriers.

A confluence of technical hiccups and chaotic weather have thrown operations into disarray on some days. Those problems have been compounded by the constraints of an industry that hasn’t returned to full force, including staffing shortages and a dearth of spare seats and aircraft to re-accommodate people.

American and Southwest, which opted to fly busier schedules than some rivals, have each had particularly rocky periods.

Have you taken a flight this summer? If so, how was your experience?

“While the rapid ramp-up in June travel demand provided stability to our financial position, it has impacted our operations following a prolonged period of depressed demand due to the pandemic,” Southwest CEO

said. “We are intensely focused on improving our operations as we restore our network to meet demand.”

Carriers have also flagged rising costs in the coming months, as they expect to spend more on fuel and other items, such as labor. American shares fell 1.8% to $21.40 in premarket trading. Southwest fell 2.7% to $53.13.

The most pressing question airlines face is whether the momentum will continue beyond summer. Passenger volumes remain roughly 20% below pre-pandemic levels, according to TSA figures.

Limits on international travel still remain, including restrictions barring non-Americans from most European countries from entering the U.S. Those rules have been a source of ongoing frustrations for airlines like American,

which rely heavily on international travel.

High-paying business travelers have also been slower to return. Major carriers have said corporate customers started traveling again, and they expect more once companies call workers back into offices after Labor Day.

American said its revenue from domestic business travel has climbed to about 45% of 2019 levels, and it is starting to see the first sparks of demand for long-haul international trips.

But the spread of the Covid-19 Delta variant has made airline investors anxious and raised questions about that trajectory.

this week said it would delay its planned return to the office in September by at least a month.

There have been other signs that the fast-spreading strain could prompt renewed restrictions. Los Angeles County said last week it will once again require masks indoors after a sharp rise in coronavirus infections there.

Southwest, which has been insulated from the effects of closed borders and international travel restrictions due to its largely domestic network, expects to fly roughly as much as it did before the pandemic by September. American has said it would call back thousands of flight attendants who took leaves of absence during the pandemic, and is speeding up plans to hire more pilots this year and next.

said a temporary pullback in the reopening is possible, but “we think the most likely outcome is that the continued recovery in demand continues largely unabated.”

United this week said its losses in the second quarter narrowed to $434 million, but it anticipates posting pretax profits in the second half of the year. United has hewed to a more conservative path throughout the pandemic, flying less than its major rivals. But the carrier is planning to increase flying in the coming months, boosting flying capacity by 39% compared with the second quarter.

Write to Dave Sebastian at dave.sebastian@wsj.com

Greg Gutfeld: The more Dems and media try to reduce security, it's up to the rest of us to enhance it

Who is Allyson Felix? Meet the American sprinter competing at Tokyo 2020